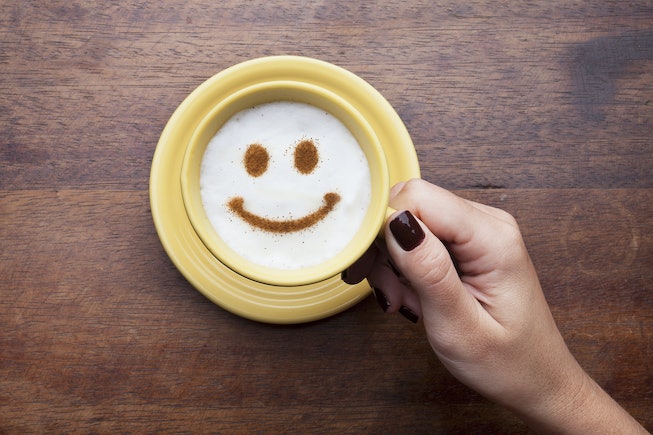 As elaborate nail art makes its way into our day-to-day lives and social media consumption, there are very few manicure trends that can surprise us these days. In the past year alone, psychedelic blooming polish has been trending, along with cute jelly nails, couples manicures, and elaborate anime nail art. However, TikTok’s latest trend takes nail polish to an entirely new and strange level— by introducing a spice from the kitchen cabinet.

Last week, a video showing artist Elizabeth Bradford painting cinnamon mixed with clear nail polish onto her nails went viral. “Girlies wonder why you're stagnant? Don't forget that cinnamon brings abundance. Put it in your clear nail polish and watch what happens," Elizabeth wrote as a caption on the video. She then proceeds to paint her nails with two coats of the cinnamon and clear nail polish mixture, which she appears to have added into the polish bottle and shaken, finishing by adding a top coat with her “intentions.” The result was a grainy brown manicure: cinnamon nails.

The video is short but Elizabeth has been responding to comments with even more tips on how to make this manifesting manicure look better. She shares that she found, “it’s more pigmented if you let the cinnamon sit in the nail polish for a little while before using it” and reminded those that want to try it out to apply a base coat first to prevent nail staining. For those trying cinnamon nails at home, she recommends adding only “a couple of pinches depending on how much clear coat there is” to create your mixture.

While this isn’t the first time nail artists have experimented with using cinnamon in their designs (there are other viral videos using the spice for aesthetic purposes rather than spiritual ones), it has sparked a conversation about using the ingredients associated with natural medicine or spirituality in nail polish and manicure. “Wait I’m making all different spice nails now,” commented one person. “I use to wear a vial with cinnamon and clove. Also, perfume/spray works if you can't wear polish ;),” wrote another. One viewer even shared that they “used to use black salt” in their acrylic manicures. Clearly just the start of a larger shift towards making nail polish concoctions at home, no doubt cinnamon is just the gateway spice into more intentional, natural manicures.