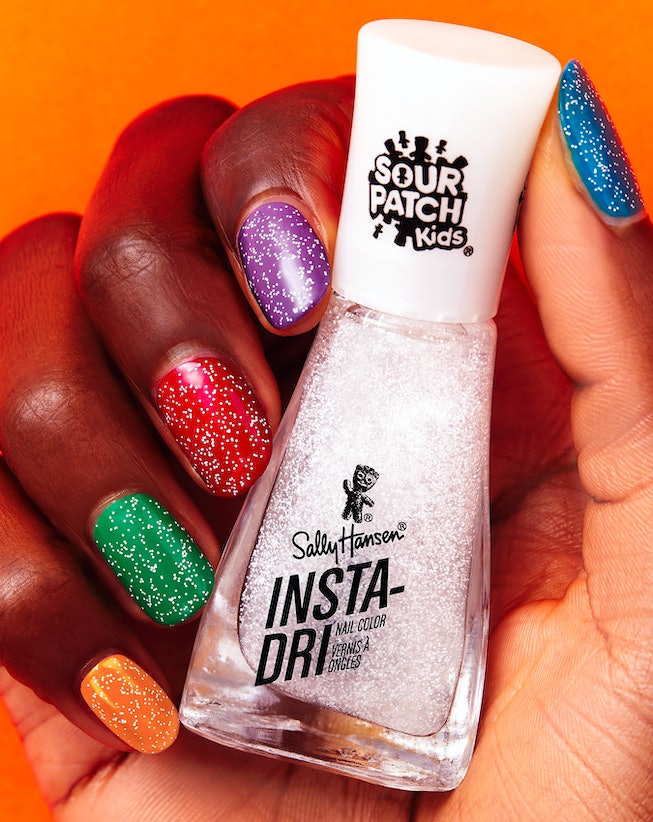 2020 is apparently the year of food-inspired nails. Following the release of polish scented like snacks from SinfulColors, Sally Hansen has unveiled an entire nail polish range inspired by Sour Patch Kids.

Arriving just in time to plan your most colorful Halloween manicure, this latest launch from Sally Hansen features seven new shades of the brand's Insta-Dri polish. The rainbow of colors include a candy apple red called Unred, a bright, pastel purple named R.I.Purple, and a perfectly pumpkin orange dubbed Pum-kid. Other hues include a lime green named Hallogreen, a deep, dark black called Ghouls Night Out, and a blue hue called Boo-lue.

Of course, no Sour Patch-inspired collection would be complete without some sugar, and at the heart of the collection is a white polish topper. Called First Sour, the clear polish comes sprinkled with white colored specks.

The collection does include a few of fall 2020's biggest nail polish trends. As the experts previously told NYLON, it's expected that the autumn season will be filled with manis in shades of green, dark red, and colors inspired by outdoors and nature. If you can't choose between the candy-inspired colors, you could also take a cue from another major trend, and create your own marble mani.

Each polish retails for $6, and you'll be able to secure the nail polish treat at retailers including Amazon, Wal-Mart, and Ulta on September 9. See every candy-inspired shade, below.