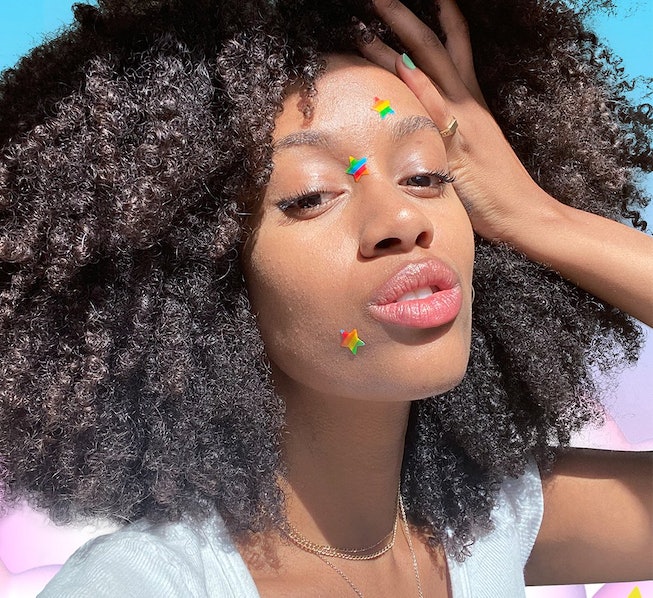 Thanks to the major beauty minds behind Starface, the act of covering your blemishes has never been so fun. After unveiling bright yellow star-shaped pimple patches, and a special glow-in-the-dark edition, Starface is celebrating Pride Month, releasing its Rainbow Hydro-Stars.

Shipping the week of July 6, but available to preorder now, the colorful variation on a Starface classic retails for $16. A permanent part of the Starface family, this iteration of the Hydro-Stars is going towards a great cause. As the brand announced on Instagram, 100 percent of net proceeds will be allocated to support Black and LGBTQ+ communities.

According to Starface, the exact recipients of profit proceeds include The Hetrick-Martin Institute for LGBTQ + Youth and The Black-Led Movement Fund. "Rainbow is a commitment to protecting and uplifting Black lives and LGBTQ+ lives, now and forever," Starface wrote on its website.

For those that are new to the Starface galaxy, the company first launched with Hydro-Stars, hydrocolloid pimple-protectors that absorb fluid, shield spots from outside bacteria, and prevent skin picking. Vegan and cruelty-free, the stars are hypoallergenic and come in recyclable packaging. Starface later expanded into face wash, releasing its Space Wash.

If you're also conscious of where your beauty bucks are going, other brands, including Glossier, Hero Cosmetics, and Manic Panic have announced similar acts of support for the Black Lives Matter movement. While some brands have given directly to Black organizations, others have announced specific products and dates that allocate proceeds towards charity.

Meet the newest member of the Starface family, below.

NEXT UP
Beauty
How To Hide Facial Piercings, From Septum To Nostril Rings
Beauty
Olivia Rodrigo Took Y2K Butterfly Clips To The Next Level At The 2022 Met Gala
Life
All Hail The Maximalist Hairstyles Of Everything Everywhere All At Once
Beauty
MGK and Megan Fox Got Matching Tattoos On Their Ring Fingers