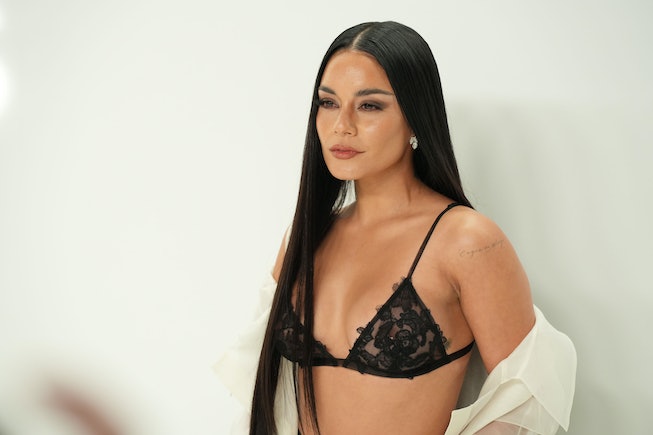 Scroll by too quickly, and you might have completely mistaken Vanessa Hudgens for another famous singer-slash-actress on your Instagram feed.

In her post from December 12, Hudgens debuted a new look that offered a grand departure from her usual appearance. The typically dark-haired and dark-browed actress showed off a voluminous, side-parted platinum blonde hairdo and completely bleached out eyebrows. The full look also consisted of bright red lipstick, a thick gold choker necklace, and a black patent leather trench.

Hudgens captioned the post, “who even is she”, to which her fans couldn’t help but notice her strong resemblance to Lady Gaga. “The Countess from American Horror Story”, one person commented, referencing Gaga’s character in the TV series American Horror Story: Hotel. “Haus of Hudgens”, photographer Vince Rossi also commented—a dual reference to Gaga’s makeup line Haus Labs, as well as her recent role in House Of Gucci.

Hudgens still hasn’t broken her silence as fans continue to clamor in the comments with enthusiasm and more guesses. “Fiona Pembroke”, her blonde doppelgänger in the The Princess Switch series (one of three Vanessa Hudgens alter-egos in the same film), was another popular guess in the comments, causing speculation that the look could be a sneaky peek at one of Fiona’s outfits from another possible The Princess Switch sequel.

Whether the bleached brows are for an upcoming role or are a part of Hudgens new look IRL, bleached brows are clearly trending across all social media platforms and in fashion. Avantgarde trendsetter, Julia Fox shared her own bleached eyebrow tutorial on TikTok back in October. Often brunette Kendall Jenner also took the bleached eyebrow look to the red carpet at the 2022 Met Gala, solidifying the look’s status as a high fashion accessory.

So, be it cosplay or a premiere of her new look for 2023—what is for certain is that the former High School Musical star is totally on trend and everyone is loving it.