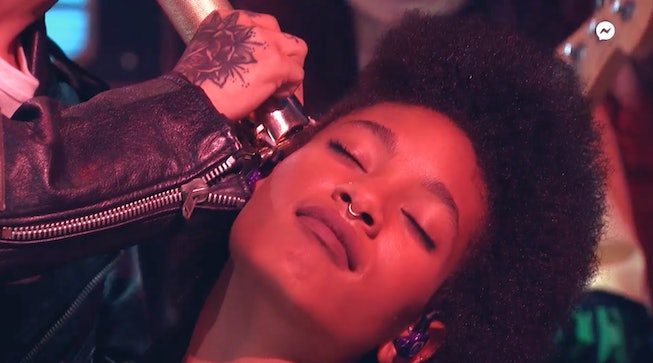 If it wasn’t already badass enough to shave your head, which is officially summer 2021’s hottest hair trend, NYLON July cover star Willow Smith took it a step further—doing it during a live performance.

During a Facebook Live event on Friday last week in celebration of her pop-punk album, lately i feel EVERYTHING, Smith played a rock version of her hit song “Whip My Hair”, which originally came out in 2010.

In addition to performing her new song "G R O W" with Avril Lavigne, Smith also surprised her fans by shaving her hair during the performance, all while effortlessly continuing to play guitar.

Smith is no stranger to a buzzcut, rocking one on and off for years and recently convincing her mom to join her in the hair trend. In fact, the musician had previously shaved her head on stage at age 11 during her Whip My Hair tour. Her father later said this was in protest of performing the song.

"I'm always shaving my head at monumental times in my life, when things are really changing, and this is one of those moments," she said in the Facebook Live video.

Smith noted that she had previously attempted to push herself away from the song, but then realized she was "pushing away the very thing that is" who she is, making the performance a powerful act of reclamation of her younger self.

While the buzz cut may be trending, Smith has once again proven that no one can do it better than the rising rockstar herself, reminding us that a shaved head on a woman had often been seen as a mark of rebellion.

“I just want all of the Black girls who were bullied in school for liking punk and metal, and for trying to perm their hair and flip it to the side and do all of this shit — I'm here for them and I want them to feel seen and want them to feel heard,” Smith told NYLON in her July cover story, speaking on her album. “That's my bottom line.”