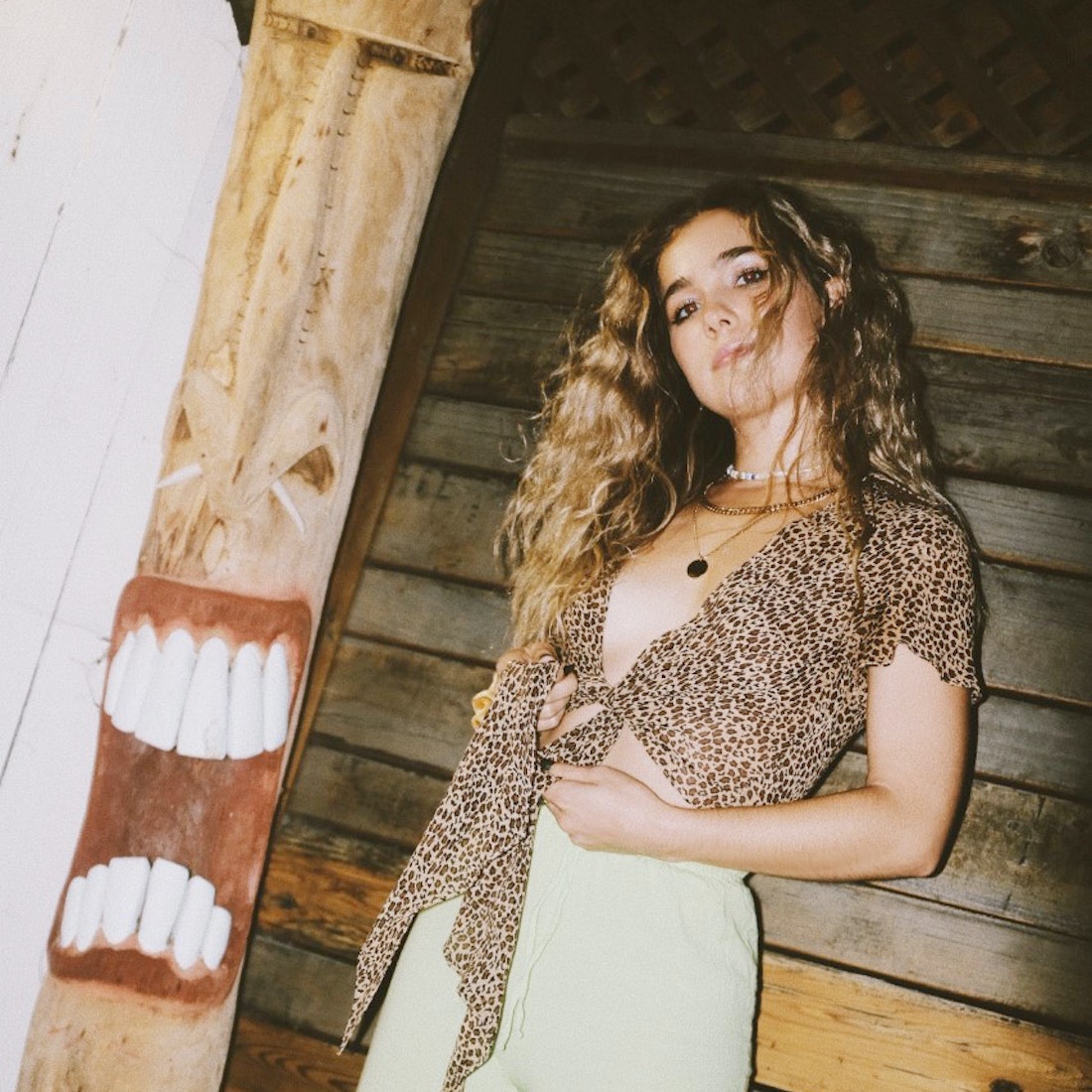 A Night In With Haley Richardson

If this was any other year, Haley Lu Richardson would be talking about her new film, HBO Max’s Unpregnant, out Friday, on the red carpet of a fancy premiere party, wearing a sparkly minidress or some other fabulous designer piece. But this is 2020, so on a Friday night, she’s chatting over Zoom, taking sips from a can of pear-flavored hard cider. And she’s dressed in a Jonas Brothers T-shirt.

“Oh no, you were able to tell that this was the Jonas Brothers,” she screams, bashfully jumping out of computer frame. But just as quickly, she’s back, with full conviction. “I went to twelve Jonas Brothers concerts when I was young, and I was very much convinced that I was going to marry Nick Jonas. Now that I look back, my personality... I feel like I should've been a Joe girl. But Nick is so serious and I think there was just something that little me, young me, just found so, oh my gosh... he's so passionate about his craft. And he had the curly hair.” At this point, she’s fully committed to the nostalgia, recounting tales of a blown up picture of her and the JoBros that still resides in her Arizona childhood bedroom. (“I have braces, I have a unibrow, and my hair is straightened to the point where it's like pieces of straw,” she says. “I'm wearing a tie because Nick always wore ties.”) She even attempted to give Nick a tie she hand-crafted, only to be thwarted by security.

“Going to see their Happiness Begins show was like, nostalgic doesn't even cover,” she continues, reminiscing on last year’s reunion tour, where she picked up the T-shirt she’s sporting currently. “I started getting emotional — I also probably was a little bit drunk — because I was just reflecting on those feelings that I had when I was young and how far I've come as a person, and how far all the things they've done in their lives and careers. They're all married and having babies, I was just so proud of them and proud of myself, and it was just this full circle, emotional moment.” Only one thing hasn’t panned: she still hasn’t met Nick. “I thought that could maybe be a perk of me being an actor and everything,” she says, laughing. “Meeting them or crossing paths or being in the same party. But no, never.”

Given Richardson’s ascent to one of Young Hollywood’s most in-demand actresses, it certainly seems like a scientific anomaly or a cruel twist of fate — plus, there’s the fact that Richardson happens to be happily engaged to her longtime boyfriend, fellow actor Brett Dier. Over the past few years, the 25-year-old has cemented her status as one of the industry’s best new talents, appearing in cult favorites across a number of genres, including horror (2016’s Split), indie (2017’s Columbus and 2018’s Support The Girls), and even teen romance (last spring’s Five Feet Apart, opposite Cole Sprouse).

In Unpregnant, Richardson — who introduces herself as just Haley, saying, “I'm very sensitive to feeling pretentious" — reunites with one of her very first collaborators, writer and director Rachel Lee Goldenberg, who directed her in the 2013 Lifetime movie Escape From Polygamy (it’s about exactly what the title indicates). She stars as Veronica, a play-by-the-rules high school senior in Missouri who finds herself unexpectedly pregnant. Knowing that having a baby is not the right decision for this chapter in her life, she decides to schedule an abortion at the closest clinic that will take her: some 14 hours away in Albuquerque. With no other options, she embarks on a road trip with former BFF Bailey, played by Barbie Ferreira.

Much will be made about calling this film an “abortion movie,” which it is not. Upon making her decision to terminate her pregnancy at the top of the film, Veronica never waivers or doubts her choice; it’s merely the catalyst (albeit one handled sensitively and with grace, thanks to Goldenberg’s directing and Richardson’s charm) to what the film is at heart: a hilarious and heartwarming buddy comedy. “It was so important that this movie isn't about ‘Should I or shouldn't I?’” explains Richardson. “She knows that this is not right for her. She knows what she needs to do and she needs to do it as soon as possible so that she can move on with her life… It's so complex and there's so much in this movie. The stuff that they go through as friends, and that kind of self discovery and balance of two people that were so connected when they were young. They go separate ways and they each individually grow within themselves. Then they come together, and they're like a mirror, they show each other things that they've been missing. That's so real.”

Still, Richardson knows that even the implication of abortion opens the floodgates of potential internet criticism. Two weeks before the film’s release, she’s already starting to see it. “I started getting a little bit of hate on Instagram the other day,” she says. “I'd never gotten that before, but there's people who are very strongly and admittedly against the very core values of this movie, and I don't even know if those people would be open to actually watching the whole movie, and seeing it from beginning to end, and being open to what all the messages are within the film… Honestly, I was pretty just bummed. Social media is so weird because people say these negative things and put out their whole very extreme opinion, and I can't really do anything back. I'm not going to sit there and get in some conversation over words on a screen on Instagram.” On the flip side, there are still some good people in the comments. “Every once in awhile, I'll look through things I'm tagged in or whatever, and there's this sweet girl that's a fan of mine who posted her opinions on abortion and the movie, about how she is personally against abortion but she's able to look at this movie and want to watch this movie and still support me as an actor,” Richardson says. "Honestly, she kind of restored my faith in feeling positive about all of this, and just restored my faith in the world, that with all this divisiveness, there are people who can disagree but still try to search for that empathy or understanding or common ground. So shout-out to my fan.”

Richardson, in general, is someone who prefers to look on the brighter side of life. Even her virtual life is sunny: Her "Animal Crossing" island, on which she estimates she’s spent 480 hours playing since quarantine began, is named Smiley Town. “Honestly, my best friends and then Brett, even my parents — even though they're in Arizona — literally have all separately had serious interventions with me saying that they think I have an actual problem, or saying that they feel neglected, genuinely,” she admits. “The one thing I will have a huge ego about is my 'Animal Crossing' island. I'm not afraid to just brag for hours. I'm going to do an island tour soon because it's a disservice to the world that they don't see my island, and I feel like I'm keeping my biggest accomplishment and potential hidden from the public. Honestly it's the proudest thing in my life, on par with this movie, and I am proud of this movie. I'm very, very proud of Smiley Town.”