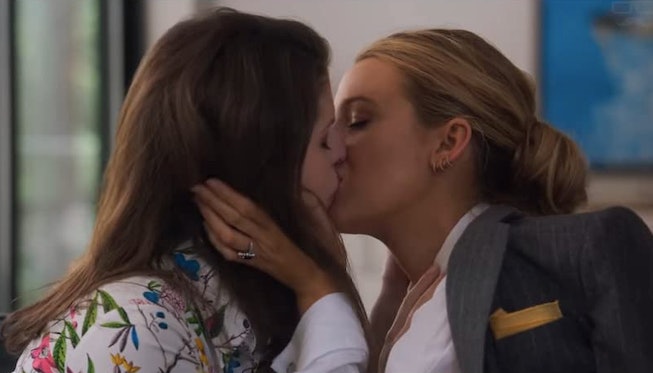 If you’ve ever asked me for a movie recommendation — especially one along the lines of “something funny but also mysterious” or “something playful yet full of suspense” — chances are high that I’ve pointed you in the direction of A Simple Favor. Directed by Bridesmaids’ Paul Feig and starring Gossip Girl’s Blake Lively and Pitch Perfect’s Anna Kendrick, the 2018 instant classic followed two very different mothers whose lives become intertwined when one of them mysteriously goes missing. Hilarious, witty, and completely fresh, A Simple Favor has withstood the test of time, thanks to its ample laughs, colorful class commentary, and plentiful footage of Henry Golding being hot. (Granted, it’s only been four years, but I digress. At the very least, it quickly shook off its “Gone Girl ripoff” accusations.) Nevertheless, I am extremely excited that I will now be able to offer a slightly fresher recommendation when presented with that request.

But why, you may ask? To which I’d answer: Because, against all odds, A Simple Favor has been blessed by the sequel gods. Yup. It’s true. You did not read that incorrectly. A Simple Favor 2 (or should it be called A Simpler Favor) has officially been greenlit.

According to Deadline, Lionsgate and Amazon Studios have joined forces to back the upcoming continuation, which will find stars Blake Lively and Anna Kendrick both reprising their respective lead roles as the effortlessly chic but strangely secretive Emily Nelson and the over-eager “mommy blogger”-cum-investigative journalist Stephanie Smothers. Original A Simple Favor scribe Jessica Sharzer will once again pen the new film’s screenplay.

Alas, there is no plot synopsis available yet for the upcoming film, so we’ll just have to wait and see the final product. While the first film was based on Darcey Bell’s 2017 thriller novel of the same name, the upcoming sequel has no such counterpart to clue us in on what we can expect to find in the next iteration — though it’d be safe to assume that Emily and Stephanie won’t be on exactly good terms when all the dust has settled. There’s only so much you can bounce back from — and rekindling a friendship that blew up because one friend was a lying sociopath and the other was a secret adulterer isn’t one of the lucky few, I’m afraid. But who can ever know!

The only thing I do feel confident saying is that, if Paul Feig is involved (which he is), the much anticipated sequel to A Simple Favor will be delightfully batshit and thrillingly unexpected. It will probably also feature at least five different plot twists. I mean — have you seen Spy? Actually, now that we’re talking about Spy, can I put in a request for the next Feig film to get a sequel? The people demand this.

But also: Will Blake Lively once again adopt a suits-only wardrobe to promote A Simple Favor 2?

NEXT UP
Culture
M3GAN S3QU3L Will Be Released January 2025
Culture
Loewe’s Howl's Moving Castle Collection Is An Anime Dream
Culture
The Madonna Biopic Is Being Scrapped
Culture
Kaia Gerber Won’t Stop Until She’s Cast As Patti Smith In A Biopic
Style + Culture, delivered straight to your inbox.