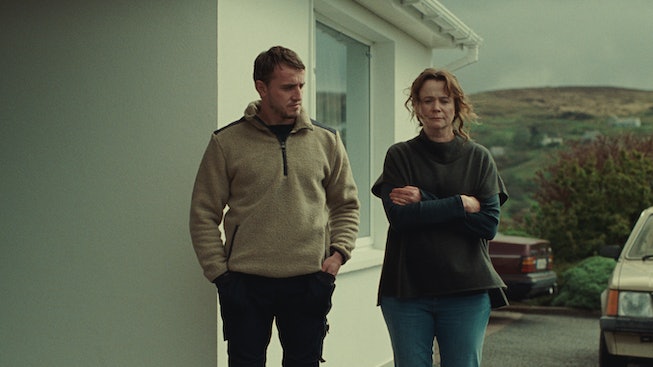 In A24’s God’s Creatures, in theaters Sept. 30, the inhabitants of a tiny Irish fishing village must contend with an issue as stark as the windswept landscape that surrounds them. When Brian O’Hara (Normal People’s Paul Mescal) returns from an estranged seven years abroad to help run the family oyster business, his mother, Aileen (Emily Watson) could not be more pleased. Her prayers of her prodigal son returning have been answered. But when Brian is accused by one of Aileen’s factory coworkers, Sarah (Aisling Franciosi), of assaulting her, she has to face the dark truth about her son, and the toxic, unspoken rules binding the village culture begin to unravel.

As Brian, Mescal is an enigmatic figure, both charming and off-putting in his denial of his crime. Watson’s Aileen is a complex, layered meditation on maternal love. At first, Aileen constructs an alibi for her son, but as she begins to understand the deep trauma he’s caused, she regrets her decision. Ultimately, in a town so individualistic where the fisherman never learn to swim so as to never be expected to rescue anyone drowning, Aileen must decide between protecting her own (and herself) and thinking of her larger community.

The idea for God’s Creatures came to screenwriter Shane Crowley and producer Cronin O’Reilly when they began hearing similar stories of female survivors being disbelieved by their communities in Ireland. “We wanted to explore male privilege through a mother and son relationship,” Crowley said in a release. O’Reilly added, “And to explore the gender politics of our world. A story about the inner conflict of a mother torn between her unconditional love for her son and her own sense of right and wrong. It gave us the opportunity to investigate themes of gender, family, trauma, sexuality, desire, and emigration—and to ask the questions— how could people do this to sexual assault survivors, how could communities treat individuals like this?”

Ahead of the film’s release, NYLON caught up with Mescal and Watson to talk about the depth of their characters, how they choose their roles, and the film’s bleak ending (spoilers ahead).

What drew you both to these roles?

Emily Watson: It was a truly wonderful script, absolutely compelling. You could smell the sea, you could smell the fish and it felt incredibly authentic. It also has a very poetic sense of Greek tragedy to it, but it's also about a very contemporary issue. So lots of things really, and a great character and great relationship.

Paul Mescal: I second everything on the script. And it's rare. You'd be surprised how hard it is to find material that is written that well across the board. And then just a character that I think is different to anything that I've done before. I am keen, being at the start of my life as an actor, to subvert any potential preconceived idea of what I might do next. And the opportunity to work with Emily was kind of a no brainer as well.

What was it like for you both, creating the emotional journeys for your characters?

Watson: It was absolutely a delicious table full of nutty, gritty actor things to get your head around. Every day was challenging and difficult and very rewarding and it had a ... that word.

Watson: That one. Emotionally, we had a really great language with the directors and they really guided us with that. But then they really let us play it and discover it and experience it.

Mescal: There was kind of a deceptive amount of fun had on top of the obvious material being heavy. But I really enjoyed the brief moments that Aileen and Brian have, where you establish the fun that they have, the love that they have. Because I feel like if you don't establish that, the kind of shattering of Aileen's fantasy and the ideal of her son doesn't have the same weight. So there really is a true kind of rollercoaster effect of the thing that was really fun to go on. But I don't think you can have one without the other.

Watson: And also, in establishing that kind of bond, we were a team and we were going to have a great time. So when it felt really kind of hairy and we were out at sea, then we felt like a team of people looking after each other in a really nice way.

What did you each think of the ending?

Mescal: I always enjoyed how bleak the ending feels, especially in Brian and Aileen's ending, I think. The film has kind of two endings to me. What happens to Brian is obviously a definitive ending in their relationship, which I feel is brutally bleak in a way that I think is true. And then there Sarah's —

Mescal: Which is both hopeful and bleak at the same time, because she's forced to leave but also is taking that upon herself, like an agency. But it always upset me that there's no capacity for anything to change when what happens to Brian happens to Brian at the end. It's the thing that is upsetting about that.

Watson: If Aileen had done the right thing and she'd gone back to the police and said, "I lied," and he'd gone to prison and he'd paid his debt to society, there would've been a chance of redemption for both of them. But in their moral construct now, he is in purgatory or hell or whatever forever and she is in torment for the rest of her life and haunted by ghosts.

Mescal: I think the film is also a study in repression and how damaging that can be. It is repression within the O'Hara household. I think that facilitates the behavior, which ultimately, I think, accelerates the action of the film and also accelerates Brian towards what happens with Sarah. But that repression is also the thing that stops them from talking to each other and furthering of the conversation.

Watson: I think interestingly, in terms of their relationship, Aileen has a sort of relationship with God where she feels that the power of prayer has brought her son home to her, and that's a divine and beautiful thing. But that relationship, that faith, it allows you to abate responsibility of your actions in way. At the end of the movie, she prays to God, where she says, "I give this moment up. I surrender. It's God's will," and he drowns.

On another note, Paul, Milly Alcock recently told me that she really admires your career trajectory, as she’s coming off a breakthrough moment with House of Dragons like you did with Normal People, but you’re now going after these more unexpected roles. How are you thinking ahead to what’s next?

Wow, that's a really nice compliment. I don't think I have a map of things that I want to take off. I'm going back and doing A Streetcar Named Desire in London on stage, which I'm excited about, because I haven't been on stage for a while. But I think it's about, it sounds really basic, but putting yourself in positions of discomfort with directors and material that will support you in that feeling of discomfort. That can look like many different things. That can look like a bigger, shinier film that represents a different sort of challenge. Or it can be material like this, which is more, I feel like, intimate in nature and true character studies. So that might sound vague, but I think my process behind choosing things is such sometimes.

That totally makes sense. And for both of you — what’s inspiring you lately? What are you reading, watching, listening to?

Watson: My daughter has just started film studies and so we're going back and watching lots of movies with her. It's a list of films that she's supposed to watch. And it's really surprising the things that still work with the kids and really resonate. We recently watched Do the Right Thing, which I was expecting them to go, "Huh?" because in lots of ways it feels quite dated. But they absolutely loved it. That was really interesting.

Mescal: I re-watched The Remains of the Day again recently. That Anthony Hopkins performance is one of my favorites of all time.

‘God’s Creatures’ is in theaters September 30.