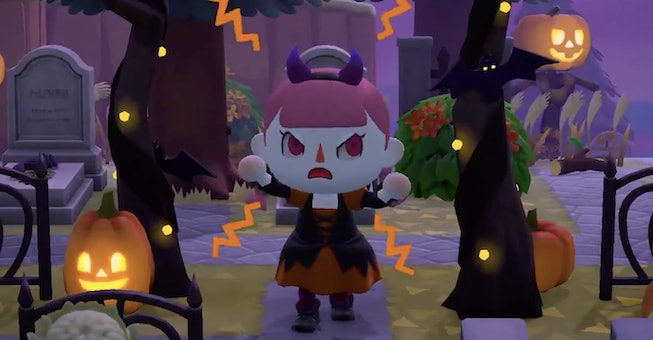 Virtual Halloween festivities are coming for your Animal Crossing: New Horizons island. On October 1, the popular Nintendo Switch title released its Halloween update, and it's filled with treats for your villagers and their island home.

The free update, which can be downloaded via your Nintendo Switch, is celebrating the fall season in style, beginning with the unveiling of pumpkins. Now available for planting on your island, pumpkin seeds can be purchased through Nook's Cranny or Leif, the friendly neighborhood plant salesman. Once planted and grown, the newest island vegetation can then be used for DIY pumpkin projects.

Along with some festive farming, the update contains everything needed for in-game Halloween celebrations. The Able Sisters now offer costumes, and your Nook Miles can be redeemed for special festive accessories, including face paint and colored eye contacts. And don't worry, because the rest of your village will join in on Halloween night, donning their best costumes for an island-wide celebration.

The Animal Crossing witching hour gets underway at 5 p.m. on October 31, and villagers will gather in the plaza for a night of decorations and fun. Rumor has it, Jack, a mysterious pumpkin-headed visitor, will also stop by. Players that share their candy and Halloween treats with the new friend will reportedly receive some special rewards.

Another new update is slated to hit the Switch in November, Nintendo reports in a press release. However, you don't have to wait until then to add new content to your game. Since its debut, Animal Crossing: New Horizons has enabled players to create their own designs, and many brands have unveiled high-fashion looks and special in-game beauty codes that allow for customization of everything from eyebrows to skin types.

See what's in store for your island this month, below.