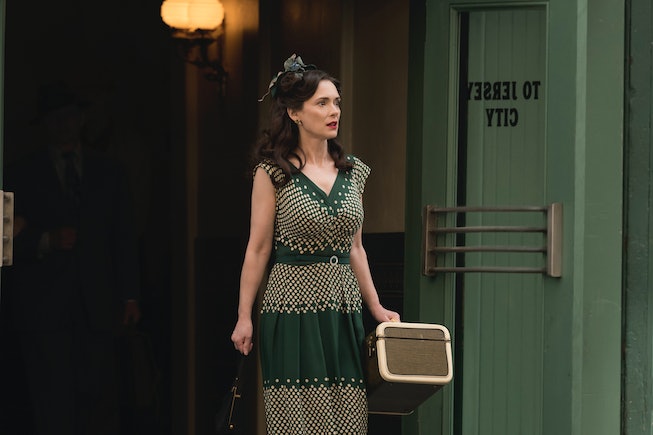 It’s a very odd time to be forced to acknowledge the 4th of July. This is a day meant to “celebrate” our nation’s “independence.” But as many of us spend our free time taking to the streets to stand against police brutality and the continuous murder of Black people, it couldn’t be more clear that, for many of us living in this country, the concept of true independence still eludes. The very notion of taking part in a “celebration” of a nation that still persecutes and disenfranchises so many of its citizens is uncomfortable, so anyone would be forgiven for forgoing the festivities and zoning out in front of the TV instead.

For those taking this route, why not spend your holiday weekend watching some shows and movies that hold America accountable for its actions rather than blindly commemorating the lies it was built upon? Whether you want a documentary (Ava DuVernay’s 13th; Laverne Cox’s Disclosure) or a docuseries (America to Me; Taste the Nation), an Oscar-winning film (12 Years a Slave) or a lower-stakes indie (Miss Juneteenth), a gripping drama (The Plot Against America), a funny comedy (Gentefied; Vida), or even a box office-breaking musical (Hamilton), here is a list of thirteen things you can use as a holiday-adjacent distraction.

You know what Hamilton is. There isn’t a soul in the world who doesn’t. Created by Lin-Manuel Miranda, the 2015 musical (which reimagines the life of Alexander Hamilton and other “Founding Fathers” as people of color) has commanded the kind of wide-reaching cultural impact that very few Broadway musicals do nowadays. Replacing traditional Broadway-style arrangements with modern hip-hop, the musical tells a classic story in a decidedly non-classic manner. Now, five years after its debut, Disney Plus is making the notoriously pricey production accessible to the masses (with its Tony Award-winning original cast intact). Originally slated for a splashy theatrical release in October 2021, the Mouse House made the smart decision to release the film a year and a half early as a fitting reminder that our country’s origin story is much more complicated than holidays like Independence Day would have you believe.

For an even closer look at our origin story, how about a reeducation on this nation’s original sin? I am, of course, referring to chattel slavery, that system that allowed kidnapped African people to be bound with shackles and then bought and sold like property. In 1977, the Golden Globe-winning Roots took a stab at dramatizing that experience; following enslaved man Kunta Kinte, it forced those who may have wanted to downplay the reality of slavery to face its horrors firsthand. In a similar vein, Steve McQueen’s 12 Years a Slave — about a free Black man that is tricked, captured, and sold into slavery — dared to depict the cruelties of slavery without mincing or sugar-coating any of its central pain. With all the current conversation surrounding censorship, there couldn’t be a better time to (re)visit this Oscar-winning classic, which was immediately hailed as a corrective to Gone With the Wind upon its release.

When slavery was abolished in 1863, it was a cause for celebration for many — but not for all. Down in Texas, slaves weren’t informed of their new rights — or, you know, their right to be free — until two years later, on June 19, 1865. Like this weekend’s Independence holiday, “Jubilee Day” is its own independence holiday, but a vast majority of the world wasn’t aware of its existence prior to this year. Which makes 2020 the perfect year for Channing Godfrey Peoples to release her debut feature Miss Juneteenth, which follows young mother Turquoise as she works to give her teenage daughter the life she always dreamed of for herself. Turquoise has wrapped these dreams up in her Texas town’s local Miss Juneeteenth pageant, which grants a full scholarship to the winner. Though the easygoing indie never frames itself as a primer on the titular holiday’s history, it does a remarkable job of addressing its importance nonetheless. Still, Miss Juneteenth shines just as brightly in its other non-holiday moments; few films are more adept at exploring the way trauma is passed from one generation to another, trapping marginalized groups in an endless cycle that is not of our own design, but often feels like it is.

America To Me (Starz/Amazon Prime)

Following students, teachers, and administrators at Chicago’s Oak Park River Forest High School (one of the highest-performing public schools in the country), America To Me tracks its subjects for a full school-year, unveiling a dispiriting legacy of racial inequity in education in the process. Impressively expansive, the ten-episode docuseries showed how drastically different one student’s experience could be to another’s, even as they attend the same institution. Oak Park River Forest feels like a microcosm of society. It’s racially diverse, but socially, it’s quite segregated; it’s seemingly progressive, but Black students are criticized for attending Black Lives Matter meetings. (As one student puts it: “Oak Park? This school is crazy. It’s like a social experiment.”) By splitting directing duties between several filmmakers, each with their own distinct cinematic style (including Minding the Gap’s Bing Liu), America To Me becomes a fascinatingly nuanced meditation on the intersection of race, class, and privilege.

As clearly laid out by former President Barack Obama in the film's opening minutes, “The United States is home to 5% of the world’s population but 25% of the world’s prisoners. Think about that.” In her Oscar-nominated documentary, Ava DuVernay seeks to explain how our nation’s current prison system is just a recreation of slavery. (Its title is a reference to the Constitution’s 13th Amendment, which outlawed slavery — except for criminals.) As compelling as it is informative, 13th connects exploitative prison labor all the way up the food-chain to billion-dollar corporations. Tracing a path from the Civil War to Reagan’s War on Drugs and beyond, 13th details how things like crack-cocaine, mandatory sentencing laws, plea bargains, and the privatization of prisons have all helped perpetuate a system that profited off the mass incarceration of people of color. (In response to the cultural climate, Netflix made the film free to stream on YouTube.)

As anyone familiar with the origins of soul food knows, most cultural cuisines have their own history — and most “American food” is a product of immigration and assimilation. In Taste the Nation, the ever-brilliant Top Chef host Padma Lakshmi, an immigrant herself, travels across the country, exploring American history by way of its regional cuisine. Her journey lands her in some interesting places that reveal complicated truths — such as how ironic it is that there is a wall separating the citizens of El Paso, Texas from Ciudad Juárez, Mexico, where so much of the region’s beloved local cuisine originated. The stories behind the food (some familiar, some not) are heartfelt and informative, but best of all, the food itself looks delectable (even when it shouldn’t, like a “desert woodrat” in Arizona) — so don’t watch it on an empty stomach. (If you’d like a peak, Hulu made episode 4 available to stream for free on YouTube. “The Gullah Way” explores the cuisine of South Carolina’s Gullah Geechee community, who have held on tight to the traditions passed down to them by their enslaved West African ancestors.)

The Plot Against America (HBO)

When Donald Trump first announced his candidacy for president back in 2015, many people laughed — a reality TV show host for president? As if, they seemed to say. Yet fast-forward five years, and we are now in the throes of a presidency where absurdity has become the norm. The Plot Against America understands this phenomenon well. Based on Philip Roth’s novel and adapted by The Wire masterminds David Simon and Ed Burns, the six-episode miniseries is an alternate history that imagines a world in which Nazi-sympathizing aviator Charles Lindbergh runs for president...and wins. Centered around the Levins, an upwardly-mobile Jewish family, the show traces as their sense of normalcy gradually changes, honing in on the ease in which fascist ideology can gain a foothold when presented to unsuspecting citizens. Arresting and painfully prescient (and spotlighting a magnetic Zoe Kazan performance as the Levin matriarch), The Plot Against America more than proves itself as an appropriate adaptation for the times — just a decade and a half after the release of the novel it’s based on.

Visible: Out On Television (Apple TV+) and Disclosure (Netflix)

We can often tell a lot about a society by studying how it has depicted its most vulnerable citizens. This year, two different documentaries attempted to do just that through the lens of the LGBTQ+ community. In February, Apple TV+ released Visible: Out On Television, a five-part docuseries that tracked the evolution of queer representation in media — from its beginnings, when LGBTQ+ characters were only portrayed as mentally-ill serial killers, to its modern position, where queer showrunners like Lena Waithe are now leading the charge in telling their own stories. Four months later, Netflix delivered Disclosure, a documentary that treads very similar territory, albeit with a specific focus on the transgender experience. Executive produced by Laverne Cox with commentary by everyone from Janet Mock to Jen Richards, it traces trans representation back as far as America’s original Racist Director Extraordinaire, D.W. Griffith.

Both Visible and Disclosure closely examine how these on-screen representations led to real-world shifts in how queer people were seen (and thus, treated) by society. Disclosure, in particular, features a prominent discussion about how casting cis men in transgender roles (who will subsequently return to their identities as men after filming) inherently perpetuates the idea that trans women are just men in disguise. (Trans actresses like Cox and Angelica Ross, meanwhile, don’t make that switch. They are the same women whether the camera is on or off.)

That Gentefied and Vida premiered within a year and a half of each other is solid proof that people are hungry for stories that not only center first-generation Latinx communities, but also address one of the biggest problems currently plaguing America: gentrification. Both L.A.-set sitcoms revolve around gentrification’s danger — on Gentefied, it is what makes one family fear for the future of their long-standing taco shop; on Vida, it is what brings two sisters together following the loss of their mother, leaving them to make arrangements for the bar she left behind. Of course, both series stand on their own too: Vida is just as concerned with how queerness complicates Latinx identity, while Gentefied’s discussion of upward mobility interrogates the implications of renouncing one’s racial allegiances in the pursuit of financial gain. Unfortunately, Vida’s stellar third season was its last, but luckily, Netflix has already renewed Gentefied for a sophomore outing, allowing these complicated conversations to continue in sitcom form for at least another year.

Of all the shows I’ve seen this year, Little America is perhaps the most suitable for exploring the ways different people experience our so-called “American Dream.” An anthology series, each of the eight independent vignettes is based on a true story about a real person. Each story is unique — one follows a precocious 12-year-old spelling bee champion who’s forced to manage an entire motel when his parents are deported to India, while another follows a Ugandan immigrant who abandons her college aspirations to pursue baking instead — but they all seek to challenge the idea that “anything is possible” in America. Which isn’t to say it’s a depressing affair; in fact, several stories are downright hopeful. My personal favorite, season finale “The Son,” revolves around Rafiq, a gay Syrian refugee seeking American asylum in a desperate attempt to find a home where he can live openly as his authentic self. A beautifully rendered tale of overcoming hardship, the episode ends on a tear-jerkingly uplifting note, brilliantly illustrating why so many people want a slice of that fabled American freedom pie.