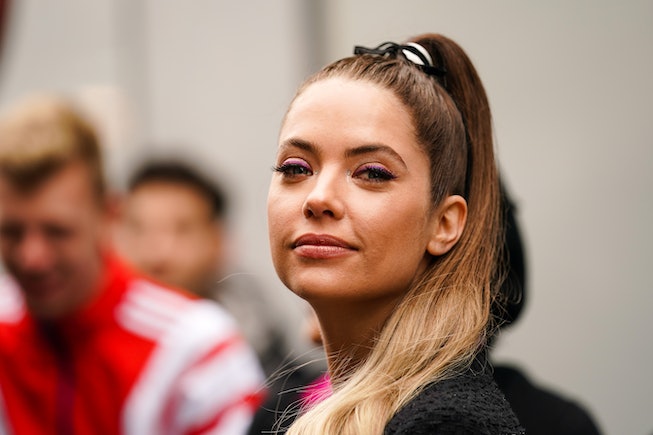 Breaking up always sucks, especially when happen to be famous and your loss ends up making headlines. Ashley Benson and her girlfriend Cara Delevingne recently called it quits, and Benson may be soothing the heartbreak wounds with G-Eazy. Photos of the rapper and a “female friend,” widely believed to be Benson, grocery shopping at Lassens Natural Food and Vitamins in Los Angeles, lead fans to believe it could only mean one thing: romance.

The Cut presented some light sleuthing done by worried fans, including G-Eazy's Instagram slideshow of dapper photos of himself, which Benson liked and responded to with a red heart emoji, as well as a response to G-Eazy’s Valentine’s Day post with the caption “Happy v day 🌹🌹🌹💔💔💔 but you can’t be my girlfriend” — she commented, “The longest legs lolll.” The two also recently released a bizarre — and ultimately unnecessary! — cover of Radiohead's mega-hit "Creep," so perhaps the outing was a platonic effort for snacks to fuel their next studio session.

Benson's fans have spoken out, and suffice to say, they're not too pleased with the potential fling. "I don’t want to live in a world where Ashley Benson broke up with Cara Delevingne to date G-Eazy," wrote one user, while another called it, "the worst downgrade in history." Rebounding is a delicate art, and I wish Benson the best of luck on her journey!