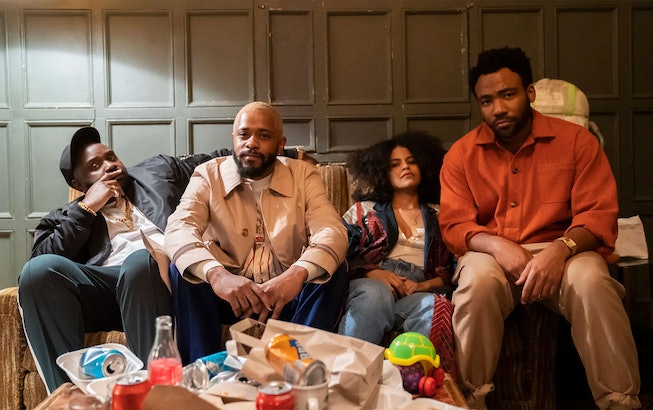 After first airing in September of 2016, Atlanta is finally reaching its conclusion. FX CEO John Landgraf revealed that Donald Glover’s Emmy-winning series’ fourth season will be its last.

Atlanta’s highly anticipated third season will premiere on Hulu and FX on Tuesday, March 24, 2022. “The new season is everything you’ve come to expect from Atlanta,” Landgraf told reporters on Thursday.

With the second season having aired way back in 2018, viewers have had a long time to prepare for the surrealist comedy’s latest installment. On Thursday, Glover promised viewers that the third season was, in fact, written in 2019 before the pandemic, which he says might be hard to believe given how much the season seems to predict about the current state of the world.

“It’s so frustrating. I’m gonna try and get FX to put a disclaimer before [the episodes],” Glover joked during an FX/Television Critics Association’s panel on Thursday. “It’s like we wrote all of this in 2019. A lot of this stuff is gonna seem like a parody of stuff that happened, but we actually prophesied most of the s— in 2020. The world is extremely predictable. We really just knew how a lot of this stuff was gonna pan out.”

Glover also jokingly told reporters, “To be honest, I kind of wanted it to end after season two.” Glover departed his overall deal with FX last year in favor of a new contract with Amazon, adding more context to the show’s ending. Glover, however, said the new Amazon deal wasn’t the reason for the series’ conclusion. “When the conditions are right for something to happen, it happens, and when they’re not, it doesn’t. The story was always supposed to be what it was.”

Glover will reprise his role as Earn Marks, as will Lakeith Stanfield as Darius, Brian Tyree Henry as Alfred “Paper Boi” Miles, and Zazie Beetz as Van. The series will reportedly take place primarily in Europe for Paper Boi’s tour.

Both seasons three and four have already been filmed, and season four will be released later this fall. Atlanta has won two Emmys, both for Glover — one for lead actor in a comedy, and one for best direction, which was the first directing win for a Black director of a comedy series.

Glover is already working on an adaptation of Mr. and Mrs. Smith for Amazon, which is expected to debut sometime in 2022. He’s also working on the music series Hive, which counts Malia Obama as a writer.