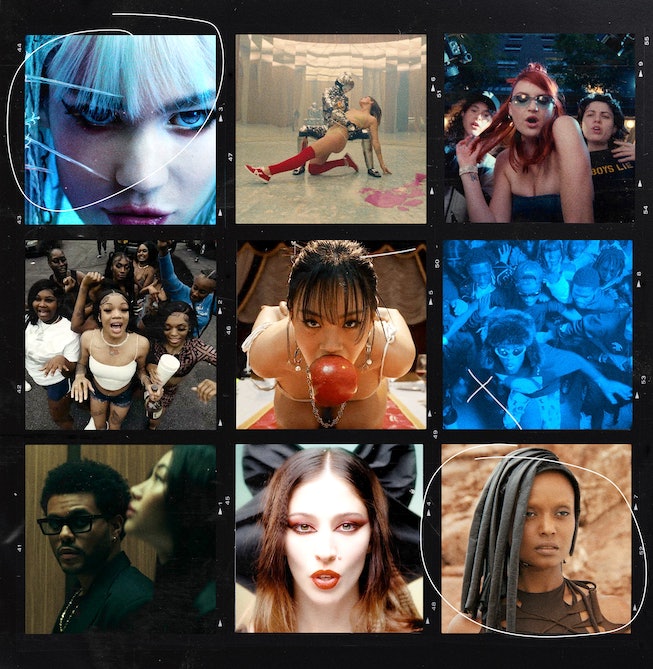 With every passing year, it feels like music videos get bigger, better, and more extreme. You can chock it up to advances in technology — indeed, CGI did help birth a slew of incredible visuals this year, including Grimes’ shiny “Shinigami Eyes” — but in 2022, a not insignificant number of videos also managed to stretch the limits of real life manipulations. Lil Uzi Vert’s “Just Wanna Rock” brought flash mobs back while pushing them to the max, while Kendrick Lamar’s “We Cry Together” nailed the intricacies of toxic relationships through meticulous choreography. Now, more than ever, a music video is less about promoting a song and more an ambitious creative endeavor. Below, in no particular order, we celebrate 19 of the best visuals this year — from Charli XCX’s “Used To Know Me” to The Weeknd’s “Out Of Time.”

In November 2022, Lil Uzi Vert organized a flash-mob-turned-fan-stampede that shut down SoHo’s Canal Street for a day. The result of that orchestrated chaos? The wild visual for viral TikTok loosie “Just Wanna Rock,” Uzi’s hectic, Jersey Club anthem that provides the same adrenaline-fueled rush that watching its video does. Directed by Gibson Hazard, the two-minute video features hordes of people filling the streets of downtown NYC, climbing over cars and shining their phone lights, before a squadron of NYPD arrives to shut down the party. We’re still not sure if that part was scripted; either way, it’s an awe-inspiring display of manpower.

After the fifteenth “f*ck you” screamed by Taylour Paige and Kendrick Lamar in the Oscar-eligible “We Cry Together,” watching can start to feel a bit too intense. But that’s the point of the Jake Schreier, Dave Free & Lamar co-directed short film, an accurate display of toxic relationships and the horribly vicious fights (and reconciliations) that keep them going. Paige and Lamar are riveting, if hard to watch, on screen, and their performances are even more incredible when you realize they shot it all live, in one take.

Tove Lo has always been a master of visuals, but the Swedish pop star’s video for “No One Dies From Love” is her wackiest, most visually stunning to date. The retro-futuristic AI soap opera features dazzling architecture, glittering costumes, technicolor-soaked footage, and a charming robot protagonist. Coupled with a spectacular, fiery ending fit for any drama, it might also leave you with a hole in your heart to fill.

With her “Shinigami Eyes” video, Grimes turns a Death Note-inspired track into a fantastical CGI acid trip filled with metallic archer angels, a laser tunnel, and a cameo from Blackpink’s Jennie. Like everything Grimes touches, it’s a technical marvel, and goes to show how much freakier the Grimes universe can get.

Let’s be real: the mere presence of Rihanna makes A$AP Rocky’s self-directed video for gangster love song “D.M.B” a must-watch. But once you get past that, there are all of the other details that make the visual exceptional, like the incredible post-production collaging and editing throughout, and its ultimately tender love story. The way the two look at each other in the end — love is real!

Korean artist Bibi goes Lucy Liu from Kill Bill Vol. 1 in her incredibly gory spectacle “Animal Farm.” However, hers is about ten times more bloody, as she murders all the guests at a wealthy businessman’s dinner party — and then some. There are some cues taken from Carrie, seen in the way she rises completely naked and drenched in red at the end to perform a guitar solo in the rain. Despite all the carnage, and because of the way it’s shot, it ends up being quite a visually beautiful affair.

“Used To Know Me” - Charli XCX

Charli XCX’s Crash came with a slate of great music videos, but “Used To Know Me” stood out for its ambitious styling and wealth of cultural touchpoints. In the just under three-minute visual directed by Alex Lill, Charli switches through a series of tableaus ranging from sexy nun to glam aerobics instructor to campy Vegas girl to Sofia Coppola’s Marie Antoinette. Each one is brought to life meticulously, and ends up being wholly convincing.

Co-starring Squid Game’s Jung Hoyeon, The Weeknd’s surreal “Out Of Time” visual starts off innocently, with the superstar and the model sharing a fun night out singing karaoke. Then, things start to get weird: reality begins distorting around him, blood fills the dinner table, and Abel is suddenly lying on an operating table with Jim Carrey as his surgeon. Horror twists have become somewhat of a gimme in music videos, but director Cliqua manages to execute this one masterfully.

MUNA had a lot to live up to following the band’s excellent But I’m A Cheerleader-themed music video for last year’s “Silk Chiffon.” Thankfully, they exceeded expectations with the equally as great Ally Pankiw and Taylor James-directed “What I Want” visual, which paints the band as paparazzi-mobbed super stars just trying to spend a fun night out at the club. Add in an incredible chaotic cameo from comedian Meg Stalter as the frazzled publicist, and you’ve got gold on your hand, folks.

Post-Roe overturning ushered in an onslaught of art meditating on abortion and women’s rights. Dove Cameron’s music video for “Breakfast,” directed by Lauren Dunn, was one of the sharper ones of the bunch, depicting an alternate world where women hold the power and privileges of men in this world. It’s certainly not a new narrative, Cameron power-stomping through offices in suits and swigging whisky, and the video knows not to linger longer on this fantasy than it needs to. Instead, it ends on this reality, as she watches in horror as a news announcer announces Roe v. Wade has been overturned.

“F.N.F.” is the breakout summer song no one saw coming that sky-rocketed Memphis rapper GloRilla to fame. Part of its appeal could also be credited to its down home music video, which involved the rapper dancing and partying to the track with a rowdy group of her friends in a parking lot. There’s something unpretentious and vibrant about the whole spectacle that makes the display all the more infectious. It’s proof you don’t need a big budget to make something that can resonate with millions.

Psy tried for another “Gangnam Style” with the hyped-up release of his first song and video in years, “That That.” While it didn’t exactly achieve it, the music video was still a visual extravaganza, this time taking on a Western bent with fringe, cowboy hats, and an elaborate saloon set. Psy’s videos are always great fun and funny, and “That That,” which introduced the 2022 version of the iconic horse-gallop dance, succeeds on all those points.

“Welcome To My Island” - Caroline Polachek

You can accuse us of recency bias for including Caroline Polachek’s December-released video “Welcome To My Island,” but a single viewing should change your mind. The left-field pop singer’s videos have always been trippy, but she takes it to the next level in her latest, frolicking about in a version of the world that feels just slightly off. In its scenes, she is a lion with a human head, running aimlessly behind a moving vehicle, erupting crimson-tinged vomit from her mouth like a volcano, and running down the beach holding the hoof of a boar. It is delightful and weird, and at the very least a punch of unbridled creativity.

Kelela’s first release in nearly five years was an emotional and geographical journey. Shot on-site in Ethiopia, the music video for her contemplative return single “Washed Away” finds the singer roaming the arid plains of the Danakil Depression, head freshly shaven, and floating in a emerald pool shaped like the African continent. The visual is a stunning homecoming for us, reacquainting ourselves to the singer’s music again, and equally for her as well.

The music video for “Saoko” perhaps sums up Rosalía’s acclaimed third album, Motomami, the best: it’s hot women on motorcycles. Not really — the album is decidedly much more nuanced, vulnerable, and complicated than that. But “Saoko”’s Valentin Petit-directed video does feel like one overall thesis statement for the record. It’s visually striking, and relentless in its messaging: that Rosalía’s version of femininity is sensual and powerful like a revving bike.

“This Is Why” - Paramore

Life during lockdown was oftentimes eerie, disquieting, and lonely, and Paramore captures all of those qualities in their music video for their song about lockdown, “This Is Why.” Directed by Turnstile’s Brendan Yates, the visual shows the band slowly losing their marbles in the gorgeous, and completely empty Los Angeles wilderness. But beyond its narrative, it’s also just really pretty to look at, the colors striking, and the choice of shots and angles artful.

As an 18-35 year old, I consider Jaboukie’s “BBC” music video to be high art (much like this copypasta). The intentionally lo-fi visual, which also serves as the comedian’s first music foray, balances humor and pop star earnestness in equal measure, while also dosing out some datamoshing trippiness for your eyeballs. This is how you change lanes mid-career.

Only an great video could’ve accompanied Wet Leg’s massive hit “Ur Mum” and the world got just that with its Lavaland-directed visual. With the band members portraying chaos-stirring grocery clerks playfully harassing an annoying teen boy, the six-minute clip manages to visually translate the same cheek and dry comedy the band’s songs exude.

Ever since Isabella Lovestory released her manic visual ode to kitten heels, we’ve been hooked on the perreo-pop singer’s unhinged visuals. This year, she released a video homage to Keratins, and her hair-centered visual did not diappoint. It’s a strobe-y, DIY collage of her whipping her hair inter-spliced with fish-eyed scenes of her in the bathroom straightening her hair. Beyond the colorful eye candy that abounds in the two-minute clip, it’s a lovely glorification of a time-honored tradition any girl will recognize.