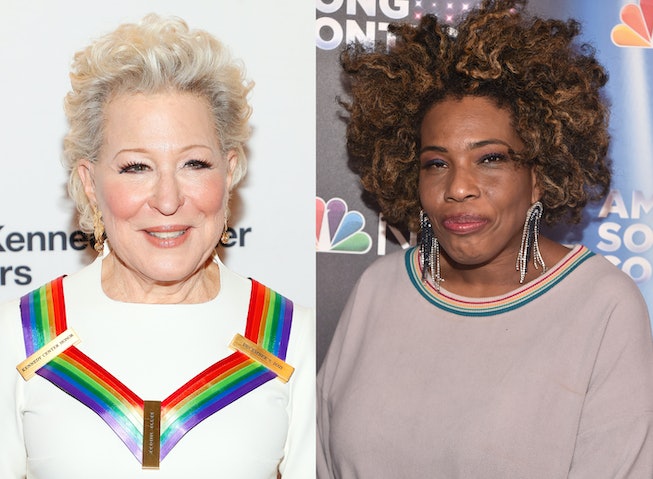 Actress Bette Midler and singer Macy Gray are both receiving backlash online after wading into recent discussions about trans people. Midler, who will star in the upcoming Hocus Pocus sequel, recently took to Twitter to discuss the inclusion of transwomen in the fight to legalize abortion care. Meanwhile, Gray appeared on British broadcaster Piers Morgan’s show, Uncensored, and shared her opinion on trans athletes competing alongside cisgender athletes. Though their topics differed, both celebrities used their platforms to delegitimize trans people — and now they’re facing backlash online. Keep reading for a breakdown of everything that has happened so far.

What did Bette Midler say?

On Monday, Midler tweeted a response condemning the reversal of Roe V. Wade. But while making her point, she also berated the use of trans-inclusive language that many abortion-rights advocates have used. She wrote, “WOMEN OF THE WORLD! We are being stripped of our rights over our bodies, our lives and even of our name! They don’t call us “women” anymore; they call us “birthing people” or “menstruators”, and even “people with vaginas”! Don’t let them erase you! Every human on earth owes you!”

Midler's tweet was met with a plethora of comments urging her to understand that acknowledging trans and nonbinary people in the fight for reproductive health does not diminish a ciswoman's identity. In response, Midler tweeted another Twitter thread defending herself.

“PEOPLE OF THE WORLD! My tweet about women was a response to this fascinating and well-written piece in the NYT on July 3rd,” Midler wrote. “There was no intention of anything exclusionary or transphobic in what I said; it wasn’t about that.”

She continued: “It was about the same old shit women – ALL WOMEN – have been putting up with since the cavemen. Even then, men got top billing. But seriously, folks, if anyone who read that tweet thinks I have anything but love for any marginalized people, go to Wikipedia and type in my name. I’ve fought for marginalized people for as long as I can remember. Still, if you want to dismiss my 60 years of proven love and concern over a tweet that accidentally angered the very people.”

Before concluding the thread, Midler wrote, “I have always supported and adored, so be it. But the truth is, Democracy is slipping through our fingers! I’m all-in on trying to save Democracy for ALL PEOPLE. We must unite, because, in case you haven’t been paying attention, divided we will definitely fall.” Along with the tweet she included a picture of the Supreme Court dressed in hijabs, which resulted in another round of backlash.

What did Macy Gray say?

On Monday, Gray appeared on Uncensored with Piers Morgan. At one point, the two discussed transwomen competing in sports, and Gray said she defines women as “a human being with boobs and a vagina.” Later she doubled down and said, “Everybody’s going to hate me, but as a woman, just because you go change your parts doesn’t make you a woman. Sorry.”

“If you want me to call you a ‘her,’ I will because that’s what you want,” she continued. “But that doesn’t make you a woman just because I call you a ‘her’ and just because you got surgery.” Gray also argued that womanhood is inherently earned by ciswomen. “Being a little girl is a whole epic book...and you can’t have that because you want to be a woman,” she said.

After receiving backlash for her statement, Gray told Rolling Stone she has “nothing but love for the LGBTQ+ and transgender community.” She added, “My statement on Piers Morgan was grossly misunderstood. I don’t hate anyone. I respect everyone’s right to feel comfortable in their bodies and live their own truth.”

Gray’s defense was not well-received, however, and resulted in even more criticism online. In response, she tweeted a screenshot that read, “All of you coming on my page, threatening me and calling me names - just becuz I said something you don’t agree with - be whatever you wana be and fk off.”

How is J.K. Rowling involved?

The Harry Potter author — who has her own history with trans people — came back online to cosign Gray and Midler's comments. She retweeted Gray’s statement urging people to “fk off” along with Midler's tweet about Roe V. Wade. Then she wrote, “Today feels like a good day to ensure I’ve bought @MacyGrayLife’s entire back catalog.”

Have any other celebrities commented?

Other celebrities have chimed in and encouraged Midler and Gray to re-consider their opinions. Actress and comedian Mae Martin released a lengthy statement in response to Midler and spoke about their own experience as a nonbinary person.

“Nobody is negating the fact that people assigned female at birth have a unique struggle against oppressive patriarchy,” they wrote. “Nobody is denying the power and magic of cis women. But, for instance: I was born female, and grew up with all the struggles that entails, but I am trans/non-binary, not a woman. I am medically and culturally transitioning and so “woman” is not an accurate word to use when describing me. The use of inclusive language when talking about abortion rights means that I - with all my shared experience and shared threat of pregnancy as I also sleep with cis men - can participate and be acknowledged in the conversation and fight alongside women.”

“We need cis women as allies - we historically have been their allies as well and continue to be. The effort to stop trans people from having bodily autonomy and receiving the health care they need is of course connected to the organized effort to restrict people with uteruses from having bodily autonomy and access to life-saving abortions,” Martin continued. “We all have the same goal and common enemy. We don’t want to be reduced to our anatomy, we want to be whole people with equal rights - a goal that should be familiar to older generations of feminists who fought for the same thing.”