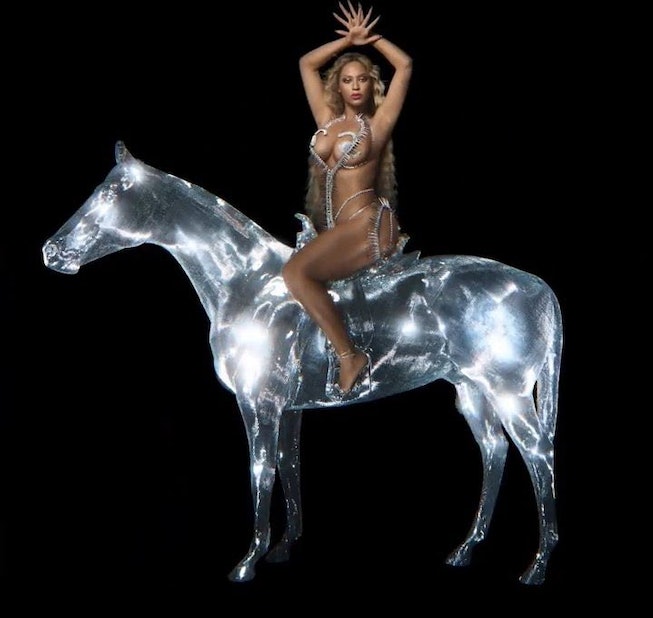 Beyoncé seventh studio album, Renaissance, has officially landed and fans are already digging into the 16 tracks’ many meanings. The album, which Beyoncé has confirmed is only act one of a three-part project, is heavily influenced by dance music with a clear queer bent that draws on decades of underground culture. The first single, “Break My Soul,” was a call to the dance floor featuring New Orleans Bounce icon Big Freedia, and songs like “Church Girl” and “Virgo’s Groove” have deep funk references that are designed to get you moving. But it’s track #3, “Alien Superstar,” that has some of the most layered meanings and references on the album.

With songwriting credits including famed trans producer Honey Dijon, “Alien Superstar” is more than a nod to ballroom culture, it’s an embrace. The song opens first with a warning to not leave the dance floor, followed by a declaration by Bey that she is “One of one/I’m number one/I’m the only one/Don’t even waste your time trying to compete with me.” Calling to mind her status as the current greatest living entertainer, and her tendency to excel at everything she does, Beyoncé tells us, “No one else in this world can think like me.”

But as the song continues, it’s clear she’s speaking to something deeper than her own status. In true ballroom form, the song itself is a narration of a moment of grandiosity, impelling the listener to enter Beyoncé’s confident state of mind and realize the beauty of their own uniqueness as she switches between the first and second person.

“Unique/That's what you are/Stilеttos kicking vintage crystal off the bar/Category: bad bitch, I'm thе bar/Alien superstar.” The category is Bad Bitch, and Beyoncé isn’t just a line, she’s the whole bar. The double and triple entendres flow from Bey, who is known to be fond of a pun.

As the song continues, Bey gives her own take on Right Said Fred’s 1992 dance hit “I’m Too Sexy,” most recently interpreted by Drake, Future and Young Thug, reminding us all of her rap credentials. In this highly feminized version of the typically over-the-top masculine track, Beyoncé flips a song about a man being too muscular and sexy for his shirt into something fully femme and queer. “I’m too classy for this world/Forever I’m that girl/Feed you diamonds and pearls, ooh baby.” (This line also references the album’s opening track, “I’m That Girl.”) She continues, confirming that she not only is the bar, the standard set that everyone has to reach, she’s actually above the bar, knocking over glasses, untouchable. “I’m too classy to be touched/I paid them all in dust/I’m stingy with my love, ooh baby.”

And that’s all before the second verse.

In the second half of the song, Beyoncé continues to break down her flyness with lines like: “Unicorn is the uniform you put on/Eyes on you when you perform/Eyes on I when I put on/Mastermind and haute couture.” She references her love for up and coming designers, singing, “Label whores can’t clock/ I’m so obscure (Unique)/Masterpiece genius/Drip intravenous.” There are references to her and husband Jay-Z’s controversial Basquiat-referencing Tiffany’s campaign (“Tiffany Blue billboards over that ceiling (Unique)/We don’t like plain”), as well as her dips into the country music of her native Texas that haven’t always been met with love from the industry (“Always dreamed of paper planes/Mile-high when I rodeo.”) Beyoncé knows what people have been saying about her, and she doesn’t care. She’s not just here to stay, she’s the best, unique, a masterpiece.

The latter third of “Alien Superstar,” which is already a straight up ballroom song, further ties together Bey’s identity and her place within the long lineage of culture she’s apart of. “I got pearls beneath my legs, my lips, my hands, my hips/I got diamonds beneath my thighs, but ego will find bliss,” she sings, referencing Maya Angelou’s famous poem, “Still I Rise,” whose lines include: “Does my sexiness upset you?/Does it come as a surprise/That I dance like I've got diamonds/At the meeting of my thighs?”

In 2019, Beyoncé received the Vanguard Award from the GLAAD Awards, and she dedicated it to her late Uncle Johnny, who she described as “the most fabulous gay man I’ve ever met.” She continued that tribute in the Renaissance CD booklet, calling him her “godmother” and crediting him as “the first person to expose me to a lot of the music and the culture that serve as inspiration for this album.”

On the “Alien Superstar” outro, Beyoncé samples a speech by Barbara Ann Teer, who was an American writer, teacher, actress and producer who founded Harlem’s National Black Theatre, the first revenue-generating Black theater arts complex in the U.S. (further tying in the Renaissance theme by referencing the Harlem Renaissance, and calling to mind her sampling of Chimamanda Ngozi Adichie on 2013’s “Flawless.”). In the speech, Teer is speaking about her life and the theater she created and community she was a part of: “We dress a certain way. We walk a certain way. We talk a certain way. We, we paint a certain way. We, we make love a certain way, you know? All of these things we do in a different, unique, specific way.”

These lines bring the themes of the track to a satisfying completion, before Beyoncé makes clear that even as we search other galaxies for signs of alien life (and exploring what extraterrestrial contact might mean for our society), otherworldliness is already on Earth. “We just reaching out to the solar system/We flying over bullshit, we flying over/Supernatural love up in the air.”