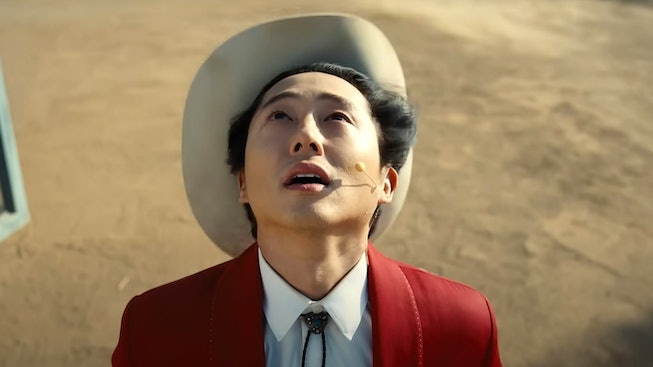 Warning: Major spoilers for Nope below.

If you were to judge solely from the trailers, Nope is a movie about aliens. Or at least a movie about alien UFOs? Jordan Peele’s third directorial effort, which follows his back-to-back box office smashes Get Out and Us, stars Keke Palmer and Daniel Kaluuya as Emerald and Otis Jr. Haywood, two siblings who have recently come into possession of their father’s California ranch, where generations of Haywoods before them have raised and trained horses to be used for films and television shows in Hollywood. Alas, their horse-training is forced to take a backseat when OJ notices something mysterious in the sky and quickly becomes fixated on capturing whatever it is on film somehow. Figuring out what, exactly, that thing is, is one of Nope’s biggest storylines. But it’s also not the only storyline. In fact, the mysterious UFO-like creature isn’t even in film’s most memorable scene. That is bestowed to something else entirely.

The scene comes about halfway through the film, during a segment simply titled “Gordy,” and starts off fairly innocently. On what is soon revealed to be a television soundstage, a picture-perfect family sits around a living room while celebrating the birthday of Gordy, their pet chimpanzee, during a live taping for popular ‘90s family sitcom Gordy’s Home! As the actors run through a scene, relatively simple sitcom jokes abound, complete with expected pauses for applause and laughter. It all feels rather familiar and par-for-the-course until the chimp playing Gordy, who had previously been off-screen, shifts temperament and begins attacking almost everyone on set. In brief flashes, we see Gordy, looking unmistakably feral, run throughout the set, violently beating his co-stars with seemingly no real reason for his sudden outburst.

The scene is framed through the perspective of one of the sitcom family’s children, Ricky ‘Jupe’ Park (first-time actor Jacob Kim), and by forcing us to watch it through a human’s eyes, Peele effectively creates a sense of terror while only showing us a fraction of the violence. Even when we can’t see Gordy directly, Peele finds other ways to signal the dread. Sound, in particular, becomes paramount. Peele ensures that we can hear balloons popping, heavy arms thumping onto bodies, and sharp teeth biting into flesh. These individual elements all coalesce to establish an atmosphere of complete carnage, hitting viewers in multiple senses.

But the linchpin of the scene is saved for the very end, when Gordy spots Jupe cowering under the table. Rather than approach him menacingly, Gordy simply walks over to the table and extends his hand out, gesturing for the pair to do one of their trademark exploding fist bumps. Nervously, Jupe begins to comply. But before he’s fully reached his arm out, Gordy is shot right in front of him by an unseen gunman. The chimp’s blood splatters all over little Jupe’s face.

The significance of what I have personally deemed “Gordy’s Massacre” only becomes clear when examining the adult version of Jupe (Minari’s Oscar-nominated Steven Yeun), who was significantly transformed by the experience, but not in the way one might expect. Rather than thank his lucky stars that his life was spared when Gordy went apeshit (pun totally intended), Jupe apparently took it all as a sign that he was special. Far from distancing himself from the memory, Jupe, as an adult, has instead embraced it with a loving fondness. Now the owner of a western-themed amusement park, Jupe has been slow to let go of his Gordy-ified past. He’s even built his own Gordy mini-museum, which is packed with memorabilia from the show — and from the slaughter. He keeps the secret room tucked away, behind a hidden door in his office. (Sometimes, he rents it out for money. One couple paid him $50,000 to spend the night there.)

Furthermore, Jupe talks about the experience with the level of excitement one might expect from someone recalling their wedding day, or the day they gave birth. When Emerald spots an issue of MAD Magazine with Gordy on the cover pinned to the actor’s wall and inquires about it, Jupe launches into a gleeful retelling of his former chimp co-star’s rampage. Juxtaposing his story with the actual rampage later in the film, one can’t help but feel slightly disturbed.

As is the case for all of Peele’s films, trying to boil Nope down to a singular theme is a fruitless endeavor. Still, throughout his press tour, Peele has made it clear that he was very interested in exploring our obsession with spectacle and our willingness to put ourselves directly in harm’s way to experience it — or, as is the case for Nope’s central trio (Emerald, Otis Jr., and Brandon Perea’s Angel), to document it. But while Emerald, OJ, and Angel approach their goal (to get photographic evidence of their alien invaders) with some manner of trepidation — at the very least, addressing the danger of their mission — Jupe approaches his own differently.

See, Jupe has also spotted the mysterious figure in the sky, and for six months, he’s turned it into a business by inviting audiences to his theme park to watch as the figure sucks up horses he offers to it as sacrifices. Though Jupe can’t possibly understand anything about this strange creature, he feels oddly comfortable in its presence, speaking as if he has control over it, as if he’s developed a special connection with it that will shield him, personally, from possible harm.

This false — ultimately doomed — sense of confidence can be traced back to Gordy and Jupe’s personal experience in the Massacre. Rather than allow his trauma to consume him negatively, Jupe flips the experience on its head, in turn fashioning himself as some special impenetrable God. By thinking that he was saved through divine intervention, instead of acknowledging it as an instance of incredibly lucky happenstance, the young kid credited himself as the reason for the chimp’s surprising loyalty to him. And if he could stop a bloodthirsty chimp from devouring him, what’s stopping him from doing the same for any kind of similarly violent creature? In the present, Jupe has internalized this God complex, and as Nope goes on, Peele shows just how much unshakable confidence can manifest as folly, eventually becoming someone’s undoing.

“I guess some animals aren’t fit to be tamed,” OJ’s late father, Otis Sr. (Keith David), tells him during a flashback. Otis was speaking about horses, warning his son about the danger of steeds, who can sometimes get unexpectedly territorial. But his quote works on multiple levels, speaking to many of the film’s central themes. Whether it’s a trainer dealing with horses, a group of friends dealing with some strange alien creature in the sky, or an actor dealing with a chimp, the fact remains that animals — or any living being that is not human — are unpredictable, and often, subject to violence if (and when) they see it fit. As the titular star of a family sitcom, Gordy The Chimp was about as “human” as any animal can get. But as we see in Nope’s most disturbing scene, an animal is still (and will always be) an animal at the end of the day. Try to tame them at your own risk.

Nope is playing in theaters now.