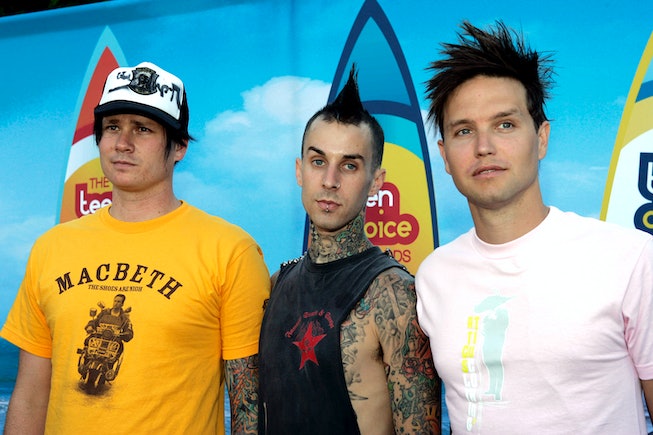 Blink-182 is back in its original formation with the release of “Edging,” the band’s first new music in three years, and first in 10 years for Tom DeLonge.

The rollicking new song is classic Blink, all crashing guitar, Travis Barker’s energetic drums, and DeLonge and Mark Hoppus’ familiar vocal dynamic. Thematically, it’s more of the misfit and delightfully raunchy anthems the world has come to love from the band, with lyrics that perhaps also wink to the punk rock renaissance that’s taken over music during Blink’s absence: “I’m a punk rock kid/ I came from hell with a curse/ She tried to pray it away/ So I fucked her in church/ Don’t you know.”

Produced by Barker, the song arrived with an accompanying Cole Bennett-directed music video which finds the band rocking out at a carnival alongside a squad of human-sized rabbits. It’s pretty fun.

“I wanted to imagine as a listener what I wanted to experience and at the same time as a band member what we wanted to make and say and most importantly how it would sound production wise in 2022,” Barker said of “Edging” in a press release.

Hoppus added: “I’m so happy to be back in the studio creating new music and looking forward to a giant world tour.”

It’s been more than three years since Blink-182 released their last album and even longer than that since the band recorded new music with all the original members. The last time that happened was almost a decade ago, when Barker, DeLonge, and Hoppus all embarked on a multi-year reunion tour in the late aughts and early 2010s, releasing their last bit of music as a fully-formed collective, the Dogs Eating Dogs EP, in 2012.

Since then, each member has been doing his own thing (Hoppus has been battling cancer, DeLonge has been making music with his other group Angels & Airwaves and investigating UFOs, and Barker, as we know, has been fully integrated into the Kardashian fold). But now, the boys are back together — with a new single, a new album, and perhaps most excitingly of all, a new world tour.

The band’s reunion announcement came on Oct. 11 in the form of a new YouTube video, cheekily titled, “WE ARE COMING! to a city near you!” Built around the double entendre of “coming,” the video centers on a bunch of people giving testimonials about how excited they are about someone coming. “If I’m being totally honest, I can not stop thinking about them coming,” says one bikini-clad woman as she peacefully floats around on a pool floatie. “I’ve tried hundreds of different ways to make them come,” says another, this one a skateboarder standing around in a skatepark. While shoving some letters into a mailbox, a mailman says, “Every night, I pray for them to come.” “We would do anything to make them come,” says one woman as she does some gardening. “That’s right, honey. Anything,” her husband responds.

The promo was a nice setup for the announcement of their comeback single, “Edging.”

Meanwhile, tickets for the massive accompanying world tour will go on sale to the public next Monday, October 17, at 10:00 a.m. local time. (A Live Nation presale for North American dates is currently set for Thursday, October 13, for anyone who uses the access code PUMPKIN.) Tickets can be purchased through Ticketmaster here.

Stretching across North America, Europe, Australia, and New Zealand, the 60+-date jaunt kicks off in Tijuana, Mexico next March and is tentatively scheduled to conclude in New Zealand in February 2024. The tour includes headline slots for all three of Lollapalooza’s Latin America dates (in Argentina, in Chile, and in Brasil), as well as a headline slot at Las Vegas’ returning When We Were Young Festival.

Throughout the tour, Blink-182 will be joined by a whole host of great acts, including Baltimore hardcore legends Turnstile, who will open for them on all the North American stops, and OG punk-rockers Rise Against, who will open for them in Oceania. Pop-punkers The Story So Far will join them as they tour across Europe, while Dylan Minnette’s alt-rock group Wallows helps them in South America.

Check out dates for the upcoming world tour below.

This article was originally published on Oct. 11, 2022