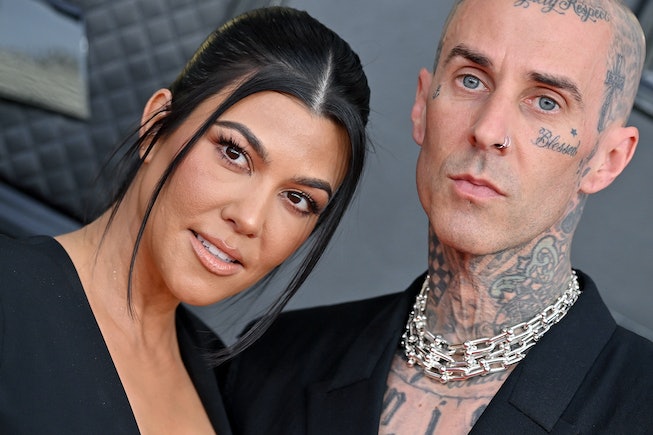 After having a non-official, secret wedding in las Vegas immediately following the Grammys in April, Calabasas lovers Kourtney Kardashian and Travis Barker officially tied the knot this weekend.

Pictures show the couple standing in front of the Santa Barbara court house with Kardashian’s grandmother and Barker’s father. According to TMZ, they had their paperwork with them and are officially married in the eyes of the law. They’ll also still reportedly be having another ceremony in Italy sometime in the future.

Pictures show Kardashian wearing a white mini dress and a long white veil, with Barker in a black tuxedo. They rode off in a black lowrider convertible with a “just married” sign attached to the grill — sweet and simple.

Kourtney Kardashian and Travis Barker got married in Las Vegas over Grammys weekend, according to TMZ. The outlet reports the pair tied the knot in the middle of the night at a wedding chapel around 1:30AM on Monday, hours after Barker performed live at the awards ceremony.

The private ceremony was officiated by an Elvis impersonator. There were no photographers allowed — just Kardashian and Barker’s. This will reportedly be the first of “several” other celebrations, and was not an official ceremony, but a practice round.

Barker asked Kardashian to marry him back in October, on the beach surrounded by friends and family. This is Barker’s third marriage, and Kardashian’s first. The couple recently hinted at trying to conceive together in the trailer for Hulu’s The Kardashians.