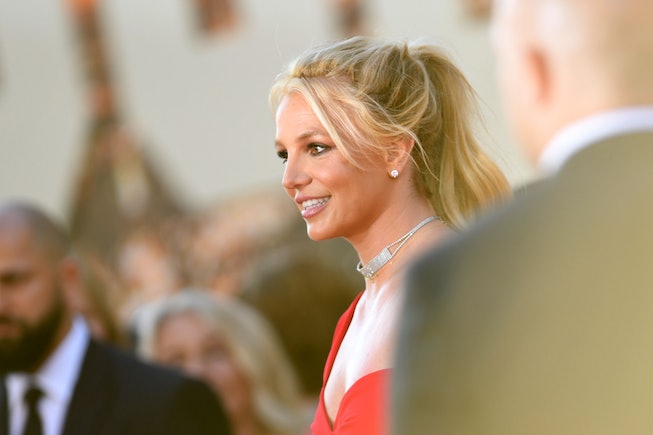 At a court hearing on Friday afternoon, Los Angeles Judge Brenda Penny ruled to terminate Britney’s 13-year-old conservatorship that has long controlled and overseen her life, from her finances to whether or not she could get married.

“The conservatorship of the person and estate of Britney Jean Spears is no longer required,” the judge said in court per The New York Times.

It’s been a longtime coming for the superstar who shocked the world in June by finally speaking out about the truth behind her conservatorship in a fiery testimony that called out her father and family for exploiting her and controlling her life through the legal arrangement. “It’s not okay to force me to do anything I don’t want to do,” she told the court. “I truly believe this conservatorship is abusive. I don’t feel like I can live a full life.”

On Friday, Judge Brenda Penny agreed. Read more about the court hearing on the Times.

Jamie Spears is out and big changes are finally on the way for Britney Spears’s 13-year-long conservatorship, which also seems to be approaching its final weeks.

The long-awaited ruling, and major win for the pop star, was the result of a tense three-hour hearing at a Los Angeles courthouse on Wednesday as Britney’s lawyer, Mathew Rosengart, and Vivian Thoreen, Jamie’s attorney, duked it out as Rosengart pushed for Jamie’s immediate suspension as Britney’s conservator, while Thoreen pushed the judge to terminate the conservatorship as a whole instead, without suspending Jamie.

Were the judge to have sided with Thoreen and terminated the conservatorship, Jamie would’ve been able to walk out of the deal with a settlement and avoid having to hand over sensitive internal documents from the last 13 years that could reveal the inner-workings of the conservatorship, including addressing the bombshell New York Times exposé that revealed the complex, potentially illegal surveillance apparatus Jamie Spears placed around Britney.

In the end, after a heated back-and-forth between both parties, Judge Brenda Penny ruled to immediately suspend Jamie Spears as Britney’s conservator. “The current situation is not tenable. It reflects a toxic environment which requires the suspension of Jamie Spears, effective today," she said. The order was placed under a statute that prevents Jamie and his attorneys from appealing the decision, and a subsequent hearing to discuss the termination of the conservatorship was scheduled for November.

Speaking directly to fans after the hearing, Rosengart celebrated the win and doubled down on his intention to aggressively investigate Jamie Spears’s alleged misconduct. “Jamie Spears and others are going to face even more serious ramifications for his misconduct,” he said. “That’s already in process, and it will continue for as long as it possibly can to get justice for Britney.”

In response to the ruling, Jamie Spears released a lengthy statement through his lawyers on Thursday morning stating that “for thirteen years, he has tried to do what is in her best interests, whether as a conservator or her father,” and that the court was “wrong” to suspend him. “These facts make the outcome of yesterday’s hearing all the more disappointing, and frankly, a loss for Britney,” the statement continued. “Despite the suspension, Mr. Spears will continue to look out for the best interests of his daughter and work in good faith towards a positive resolution of all matters.”

Britney, on the other hand, is “on cloud 9” — literally — after the momentous decision. Shortly after Judge Penny made her ruling Wednesday afternoon, the star posted a video of her seemingly flying a plane to her Instagram account with the caption: “On cloud 9 right now !!!! First time flying a plane and first time in a prop plane !!! Geez I was scared !!! Pssss bringing the ship home, JL ... Stay classy beautiful people !!!! New pics coming soon !!!!”

In the meantime, read on for everything that’ll be changing in Britney’s conservatorship, and what to expect next.

When is Britney’s next court hearing?

Britney’s next court hearing is scheduled for Friday, November 12. Judge Penny is expected to rule on whether Britney’s conservatorship will be terminated then.

Rosengart himself said that his “hope and expectation” is that the conservatorship will be terminated on that date without an additional evaluation from Britney, per Rolling Stone. “Britney doesn’t believe a mental evaluation is necessary, and I certainly don’t,” he told RS.

A second court date has been scheduled for December 8 to wrap up any remaining financial matters.

Why the wait to terminate Britney’s conservatorship?

As mentioned above, if the conservatorship had been terminated without Jamie’s removal, her father would’ve been able to walk away with a settlement as well as avoid having to hand over sensitive internal documents regarding the conservatorship over to Rosengart. #FreeBritney activists and lawyers online have pointed out that with Jamie gone, his successor can now request all files from the former conservator relating to the conservatorship, including 13-years worth of communications between Jamie, former co-conservator of the estate Andrew Wallet, and everyone else on the conservatorship team.

What’s changing in Britney’s conservatorship in the meantime?

Judge Penny has appointed John Zabel to replace Jamie Spears as Britney’s conservator on a temporary basis. An accountant, Zabel was put forth by Rosengart to oversee Britney’s estate in its final weeks. According to Insider, Zabel is a certified public accountant, and has worked with large companies like Paramount, Sony, and Lionsgate.

This article was originally published on Sep. 30, 2021