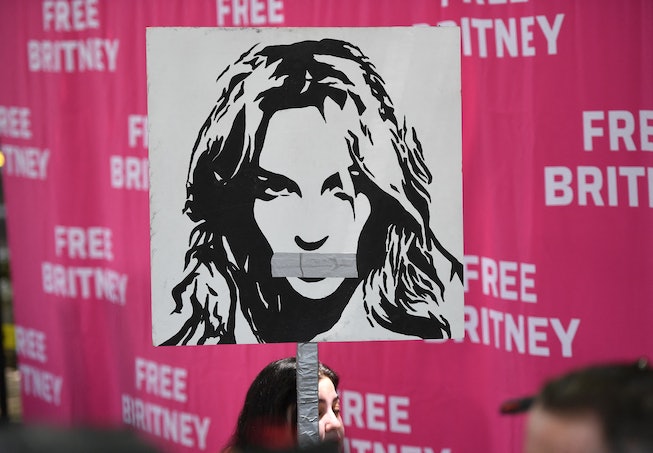 Jamie Spears has officially been suspended from the conservatorship, according to live reports from Britney Spears’ latest court hearing.

After a heated back and forth between Jamie’s lawyer Vivian Thoreen and Britney’s lawyer Mathew Rosengart, Judge Brenda Penny has ruled to suspend Jamie Spears from the conservatorship. The order “shall remain in full force and effect until a hearing on removal,” Penny reportedly said, according to those in attendance that were live tweeting the hearing.

Britney Spears’ 13-year conservatorship might undergo some big changes come Wednesday, September 29, 2021: the date of the star’s next court hearing that’s expected to be a major turning point in her complicated case.

Since her last hearing on July 14, in which Britney was finally granted the right to hire her own lawyer, Hollywood powerhouse Mathew Rosengart, a flurry of petitions have been filed by both Britney and her father Jamie Spears’ teams, including filings to remove Jamie from the conservatorship once and for all, and the termination of the conservatorship itself.

Judge Brenda Penny, the presiding judge over the case, is expected to make her ruling on all of the petitions on Wednesday which will either put the conservatorship on route for termination or, in the worst case scenario, leave everything as is.

It’s worth noting that new allegations against Jamie Spears from a recent New York Times documentary has put him and his team in hot water, as it was revealed that her father hired a security firm to monitor her phone and communications, and bug her house including her bedroom. In response to the allegations, Rosengart filed on Monday a third request to immediately remove Jamie from the conservatorship “by no later than September 29, 2021.”

Read on for everything you can expect to go down at Britney’s September 29 court hearing.

When is the hearing scheduled for?

Will Britney Spears speak at the hearing?

At press time, there’s no confirmation that Britney herself is expected to speak or make an appearance at Wednesday’s hearing. However, she did unexpectedly phone in and speak at her last court hearing on July 14, so it’s entirely possible that she may do so again on Wednesday. The pop star has become more vocal about her situation and the conservatorship in recent months, even mentioning the conservatorship directly in an Instagram video. It’s a hopeful indication that the rest of her court battle won’t unfold behind closed doors.

Will Jamie Spears be removed as conservator?

Jamie Spears’ removal and suspension from the conservatorship is the biggest and most pressing issue to be addressed at the hearing, with Rosengart filing not one, not two — but three separate requests to the court for Jamie’s removal since Britney’s last hearing on July 14.

Among new insight from former members of Britney’s inner circle, the documentary’s biggest revelation was that her father allegedly hired a security firm to monitor her phone and communications, and plant audio recording devices throughout her home including in her bedroom, likely without her knowledge, according to former employee of the firm Alex Vlasov, who was interviewed in the documentary. As the Times points out, recording private conversations and monitoring text messages without both parties’ consent is illegal in California. (Following the film’s release, Deadline claimed on Tuesday that the FBI is already looking into the claims for further investigation.)

Perhaps most egregiously the firm — and in extension Jamie — had access to communications between Britney and her former court-appointed lawyer, Sam Ingham, conversations that Rosengart calls “sacrosanct” in his latest filing.

“Unauthorized recording or monitoring of Britney’s private communications — especially attorney-client communications, which are a sacrosanct part of the legal system — represent an unconscionable and disgraceful violation of her privacy rights and a striking example of the deprivation of her civil liberties,” Rosengart said in a statement to Vulture. “Placing a listening device in Britney’s bedroom would be particularly horrifying, and corroborates so much of her compelling, poignant testimony.”

Rosengart adds in the new filing, “The record is replete with overwhelming evidence mandating the immediate suspension of James P. Spears by no later than September 29, 2021.”

Will the conservatorship be terminated?

This is the other major topic that is expected to be addressed by Judge Brenda Penny at Wednesday’s hearing. Rosengart formally filed the petition to terminate Britney’s conservatorship on Wednesday September 22 stating that the star “fully consents” to “expeditiously” ending her conservatorship, with hopes it will “completely and inevitably terminated this fall.”

The filing is in response to Jamie Spears’ own petition to the court to terminate Britney’s conservatorship. In the documents filed by his attorney Vivian Thoreen on September 7, she wrote, “As Mr. Spears has said again and again, all he wants is what is best for his daughter. If Ms. Spears wants to terminate the conservatorship and believes that she can handle her own life, Mr. Spears believes that she should get that chance

Judge Penny is expected to decide whether the conservatorship will finally come to an end at the hearing, as well as if Britney will need to undergo another evaluation before its termination. In her June 23 testimony, Britney herself emphasized her desire to end the conservatorship without having to undergo an additional evaluation. “I don’t think I owe anyone to be evaluated,” she said. “I’ve done more than enough.”

Editors note: This article was updated on September 29, 2021 with more information regarding the court hearing.

This article was originally published on Sep. 28, 2021