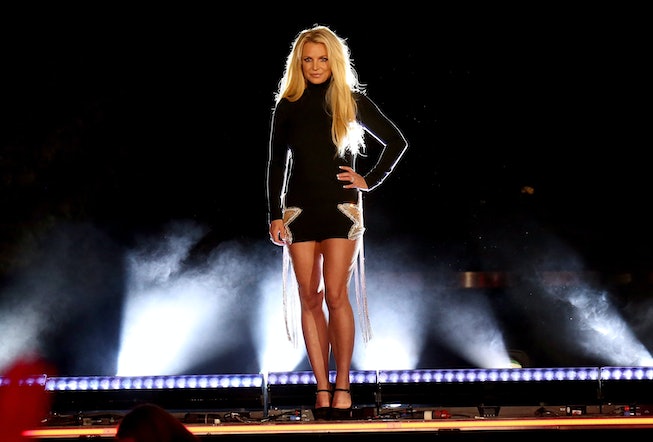 Britney Spears had an immensely difficult year, but she’s ready to make a comeback. On Wednesday the singer proved her voice is stronger than ever in a video posted to her Instagram feed. While wearing a Y2K inspired look — reminiscent of her early days of fame — Spears showed off her impressive vocal range, and teased an upcoming music release.

According to Dazed, the video originally included a caption with updates on her career. It has since been deleted, but Spears reportedly wrote, “I just realized this today guys...after what my family tried to do to me three years ago...I need to be my own cheerleader!! God knows they weren’t.”

She then clarified that the video was simply an example of her natural talent. “No...I am not auditioning for anything,” she wrote. “I’m reminding myself and the world of who I am.” Then came the big reveal — an early Christmas gift for fans who’ve been waiting to see what her next move might be. “Pss new song in the works...I’m gonna let you know what I mean,” she concluded.

So far she hasn’t given any more updates, but she appears to be moving forward with her revival. Later that afternoon she posted a throwback photo with a cheeky caption that read, “Sit down and stay humble ya’ll, and kiss my motherf***ing ass.”

Since gaining freedom from her 13-year-long conservatorship, Spears has used social media as an outlet for self expression. Switching between posting dance videos, outfit reveals, and photos of her home life, the singer is finally able to be her most authentic self both on- and offline. While she continues to tie-up loose ends with her ongoing legal battle, it’s clear that Spears has a new lease on life and the ability to (finally) do whatever she wants.

Though we can expect to hear new music in the future, we may see Spears return to the big screen first. In November she announced that she’d finished shooting a film called The Idol. Some fans suspect that it’s the same project The Weeknd is working on for HBO, though that has not been confirmed. Meanwhile, Spears is also writing a new book about a ghost who comes back to life after spending three years in limbo.

With this many projects in the works she’s sure to make a triumphant return, and after a much too long hiatus, we’re all excited to see it.