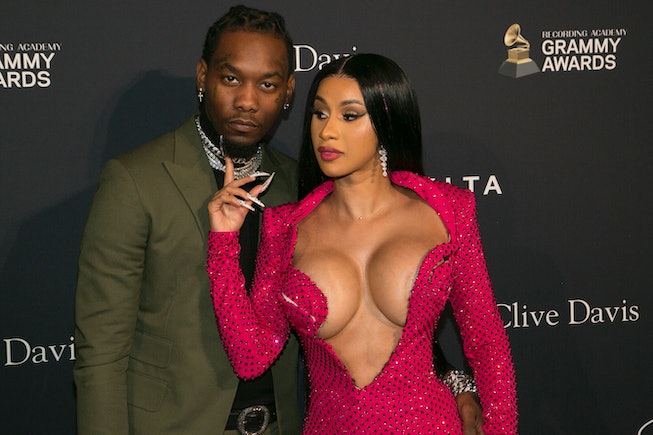 Love is a beautiful and complicated thing. Sometimes it leads to lifelong marriages, while other times it leads to filing, and then un-filing for divorce. The latter seems like Cardi B's current marital status; the rapper filed for divorced from her husband, Offset, last month, only to apparently reconcile with him during her 28th birthday celebrations. The emotional whiplash is understandable, and Cardi knows her martial route is not necessarily the norm.

“Listen y’all, I’m just a crazy bitch,” she explained over one of her signature candid Instagram Live sessions. “You know how I be arguing with y’all on social media? That’s exactly how we are, between me and my man. So when people be saying I be doing shit for attention, with this and that, no, I’m just a crazy bitch.”

Along with being a self-proclaimed "crazy bitch," Cardi is also born under the astrological sign of Libra, often the butt of many an esoteric joke for having a difficult time making and sticking to decisions. Hmm, checks out! “One day I’m happy, the next day I wanna beat a n**** up,” she continued. “I just be starting to miss [him]… It’s hard not to talk to your best friend. It’s really hard not to talk to your best friend. And it’s really hard to have no dick.”

For Cardi's (seemingly mask-less) birthday celebration in Las Vegas, Offset got her a Rolls Royce truck with a custom leather car-seat for their daughter, Kulture that cost a cool six-figures — despite native New Yorker Cardi not knowing how to drive. “People been saying that I took him back like I’m materialistic,” Cardi said, addressing the haters. “I do like material things, I like material things and everything, but I just didn’t … What do you want me to do? The n***** gave me a Rolls-Royce and I snub him?”

Never one to censor herself, Cardi finally got to the root of the dynamic: pure carnal energy. “I really wanted some dick for my birthday,” she said. “We’re just really typical, two young motherfuckers who got married early, that’s what we are. We’re not no different than y’all fuckin’ dysfunctional-ass relationships. We’re the same way. We’re just more public.” Celebrities are just like us — merely pawns to their desires!

Cardi and Off-set have been on-again-off-again through the majority of their relationship. In 2018, they briefly split when it was revealed that Offset was unfaithful three months into their marriage; they reconciled when he crashed her headlining set at Los Angeles' Rolling Loud Festival, pulling out all the stops with giant floral arrangement that read, "Take me back Cardi.”

The two had a hearing in their divorce case scheduled for November 4, in which they were seeking joint custody of their daughter. It's unclear how the case will proceed.