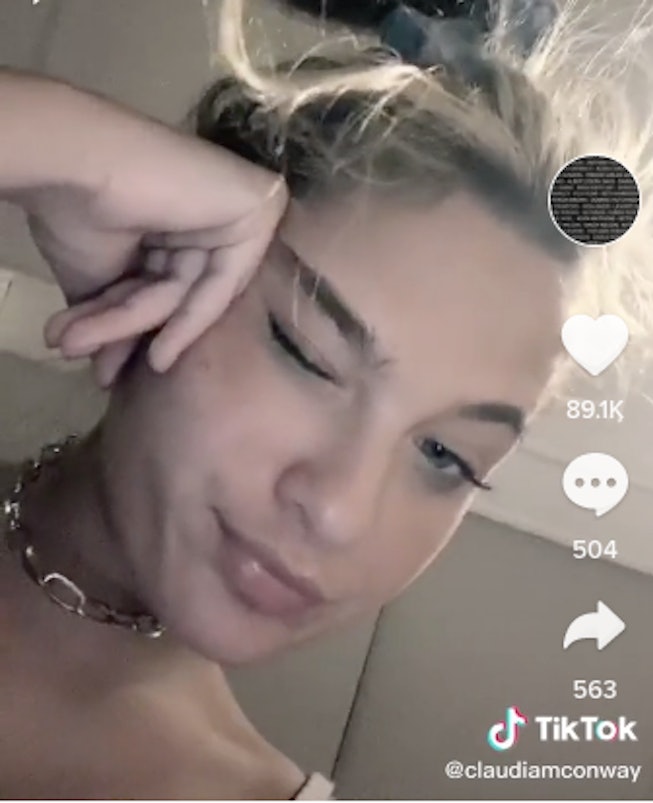 The latest member of the Conway clan to make headlines wasn't President Trump's loyal warrior Kellyanne, or her Trump critic husband, George — it was their 15-year-old daughter, Claudia. The Gen Z teen was posting vehemently anti-Trump videos on her personal TikTok account, which obviously posed a potential problem for her mother, who is the president's senior political counselor. As soon as Claudia's critical TikToks went viral, so did her parents' attempts at shutting her down. First, they went after her TikTok, deleting all her "political" videos, and now the silencing has extended to Twitter.

Claudia bid farewell to her Twitter followers for the foreseeable future on the evening of July 13. "My parents are forcing me to delete social media so this is my last tweet," she wrote, before pinning the tweet to the top of her page. "Apparently, I don’t have a platform! It’s fake! Love you all so much. Keep fighting." Prior to being banned from Twitter by her parents, Claudia livestreamed confrontations with them regarding her social media activity, trolling them both and telling her father that she was “sorry [his] marriage failed.”

Initially, her TikTok was made private, but now that the account is public once again, Claudia has moved toward a quasi-performance art tip. She's trolling Trump supporters harder than ever, posting videos of her dancing with a Trump 2020 sign and announcing she's been "cured from [her] radical leftism." Clearly, she's not going down with a fight.

"I think TikTok is a huge platform especially for Gen Z kids," Conway said in an interview with Insider, explaining that "cute little videos" were a vehicle to get her opinions out there. "Growing up when your mom is Kellyanne Conway, it's really really hard to disassociate yourself with that image because people look at me and are like 'oh, that's Kellyanne Conway's daughter; she must love Trump.' In reality, I really don't."

Claudia's opinions may have ruffled her conservative parents' feathers, but it gained her a strong political ally: former Democratic presidential candidate Marianne Williamson. "We’ll be waiting for you when you get back," replied Williamson to Claudia's farewell tweet. Between Williamson harnessing love and Claudia's viral TikToks, the Trump administration may have met their cosmic match.