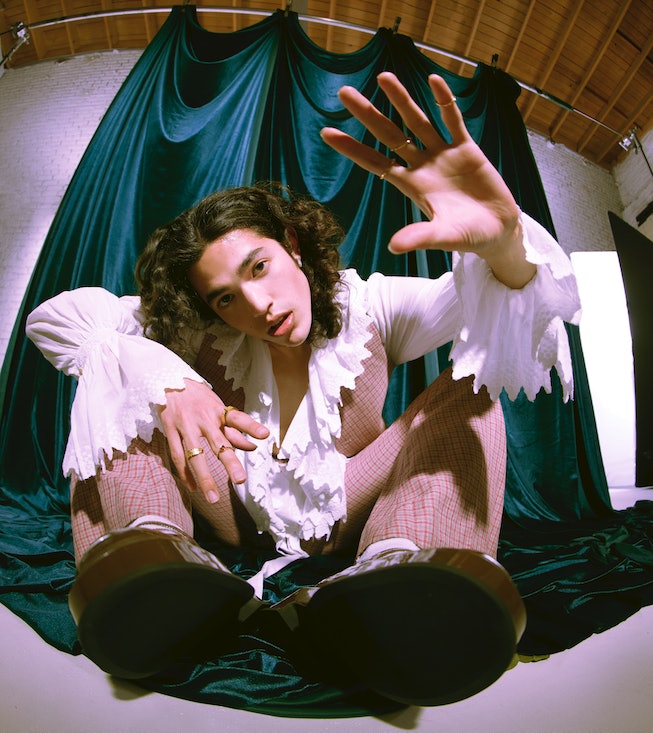 Conan Gray has turned the page on a new chapter of his life in just a handful of days. Fresh off the international tour of his debut album, Kid Krow, the dawning of his sophomore album Superache marks a new era for the pre-eminent Gen Z pop star. With his irreverent but heartfelt perspective on love, life and loss as unabashed as ever, Gray’s lyrics continue to chart his search for “genuine personal connection” as he navigates the plight of youth succumbing to adulthood.

During our chat, the 23-year-old “Memories” singer punctuates his return home with a brief tour of his Instagrammable piano setup, on which plants dangle and framed pictures stand, while his kitchen is complete with three boxes of gluten-free brownie mix that a friend had flown in from his hometown Texan grocery store. Like his homely space, Superache is abound with personal touches, each song like a diary entry with intimate vernacular.

“I wrote these songs for me,” Gray says one morning over Zoom. “All I knew is that I didn’t want to repeat myself and say the same things I said on Kid Krow and I think life has changed enough for me to have new things to say.”

For Gray, songwriting has been a lifeline in the pandemic and Superache is very much a homemade creation. Penning confessional ballads to high-tempo tracks from his bed and piano, Superache opens with Gray belting “I want a love like the movies,” a heart on his sleeve declaration that sets the tone for the following tracks. Forged from self-reflection, Gray’s playful jibes, angsty sarcasm and melodramatic sentiments are articulated with unflinching authenticity.

Conan hopped on a call with NYLON to chat all about Superache, writing with pop connoisseur Julia Michaels, Sally Rooney novels and much more.

You’ve just finished the international leg of the Kid Krow tour, how is it to be back home?

It’s weird to be back in my house. I feel like I’m intruding on my own space. So much has changed in the past three months and with Superache coming out I just don’t even know who I am.

When did Superache begin for you?

I started writing it a few months after Kid Krow came out. The first song I wrote for it was about two and a half years ago, and I wrote almost all of it at my piano, on my guitar, or in bed. Because we were in the pandemic I spent two years just writing.

Do you think writing at home is why you were able to achieve such a vulnerability on this record?

Yeh, I think maybe that’s why I end up writing things matter-of-factly. I don’t feel the need to create a ruse about who I am. I just write for my own sake and I had no intentions of becoming a singer. You’ve seen me [on YouTube] since I was a teenager, I’m not the type to want that. I wrote Kid Krow sitting in bed and I wrote Superache sitting in bed. I think it’s what I do for my sanity and for processing my feelings, then [the songs] end up on albums.

So how do you go about sharing these personal lyrics in a studio?

It’s not as hard for me to open up to Dan [Nigro, Superache’s producer] as I’ve known him since I moved to college. In a lot of ways, he’s like a dad to me. We make songs out of Dan’s garage, it’s a very comfortable space and he’s watched me grow up so when I show him songs he’s like ‘Oh, why did you do that Conan?’ I get to present the songs already written so I don’t have to worry about revealing anything because I’ve already said it how I want to. I think I’m better at writing songs than I am speaking so that’s how I tell him about certain things that have happened in my life.

And Julia Michaels co-wrote some of these tracks with you, how did that collaboration come about?

I think she’s such a brilliant pop writer and I just wanted to see her writing process. She’s one of the best of my generation. She came into the studio one day and I was nervous to meet her. We were at the beginning of making the album and I didn’t know what I wanted the album to sound like yet.

I told Julia I think I want to write something upbeat, we’d met two minutes before and she looked at me and said, ‘Do you really want to write something upbeat, Conan?’ and I was like ‘No’. Then we ended up talking about life, the fact I hadn’t been in love before or dated anyone before and how I spent all my time looking at couples and living vicariously through them. And then we wrote “People Watching.” We just got along, she’s an incredible person. She really won’t bullshit you. She tells you exactly what she thinks and that’s a very rare quality in a person.

Kid Krow was so well received, are you feeling any pressure with Superache’s release?

I feel like my first album was like my introduction, and it’s so easy to introduce yourself, you’re just laying the groundwork and a first impression. [Superache] is that stage in a friendship where you start to see their flaws and you choose whether you love them or not. You get to see a bit more of the truth of someone. I feel like when I’m in that situation, it’s so interesting to see more. I talked about a lot of things on Superache that I haven’t really spoken about on Kid Krow, it dives a lot deeper into the reasons I am the most annoying human alive [laughs].

I am so glad to see “Disaster” get a music video. What is the background of this song and video?

“Disaster” is a very melodramatic song and it’s not supposed to be taken super seriously. Sometimes I get annoyed because people think people are so linear. Like, no, as a human being you can have a song like “Family Line” and a song like “Disaster.” I wanted the [“Disaster”] music video to have this feeling of being a bit ridiculous. The song’s a bit ridiculous, I also think there’s a lot of humor in Superache. There’s a lot of sarcasm because that’s just who I am as a person, I don’t really take life super seriously and my biggest pet peeve is pretentious people.

For “Disaster,” I wanted to make a music video about me going on all these conceptual fake dates with a bunch of random people, and it become very evident that the reason I am single is because I am the problem. A realization I’ve had in the time between Kid Krow and Superache is that there are multiple reasons why someone would be single while you’re young: people are figuring things out and it’s harder to get into a relationship because there’s a lot of overthinking, vulnerability issues, commitment issues, and all these things. I think “Disaster” perfectly portrays all the overthinking and the ‘Oh my god, what if they don’t like me back.’

You, Olivia Rodrigo and Gracie Abrams are being referred to as the singer-songwriting voices of Gen Z. What does being an emblem of Gen Z mean to you?

I think my generation of songwriters crave genuine feelings. We live in a generation that is so highly curated through social media that all we really want, well all I really want, is to think ‘Oh I’ve been through that before’ and that this person is talking about a real thing and not just feeding me nothingness that’s catchy. Sometimes catchy is very fun! That doesn’t negate anything. I grew up listening to great songwriting that affected me because it’s personal and I think, because of the world we live in right now, we lack a lot of genuine personal connection sometimes.

Throughout the album you make references to romance in movies and side characters in novels, I wonder if your lyricism is inspired by other storytellers?

When I was writing Superache I read a lot of Sally Rooney novels. I also read a lot of YA, almost a little too young for me, novels because I stopped reading as much at the age of fourteen and in the pandemic I had to pick it up again from the beginning. I re-read all of Harry Potter and finished A Series of Unfortunate Events. I worked my way up with Sally Rooney novels, I was obsessed with Normal People, I think that book and show are incredible. I just recently read a book called On Earth We’re Briefly Gorgeous, truly a painful read but so well written.

I don’t know if I was inspired by them but I do feel like [Superache] is an album that has a tinge of romanticism to it, for sure. I also think it’s an album just about living life and a lot of the books I’ve read in the past few years have just been about life. This album is about being me in this current stage, this in-between, strange purgatory of youth and childhood versus the rest of my life.