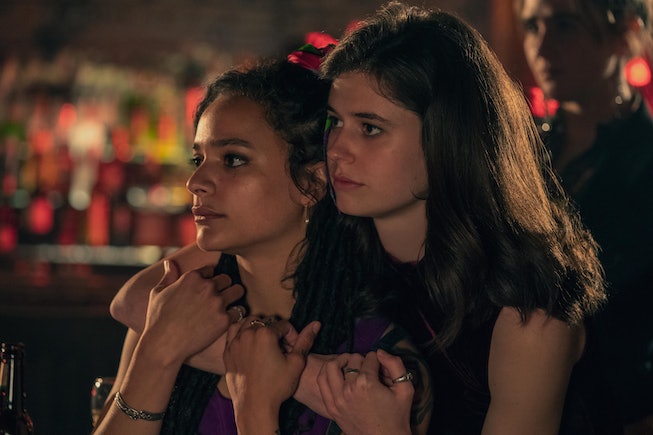 Conversations With Friends is a show that thrives in its silence. The Hulu adaptation of Sally Rooney’s (other) best selling novel is filled with more sighs, heavy breathing, and well, nothing, than talking. In one of the show’s pivotal early scenes, as main characters Nick and Francis kiss for the very first time, it’s completely quiet save for the intense sound of their lips smacking. There’s no music to swell in the background to take the edge off of the charged moment; you can only try and get comfortable.

According to the show’s music supervisor Juliet Martin (who also worked on Normal People), this was an intentional choice by the show runners in order to keep the story’s biggest moments undisturbed from errant outside interference. “I think [it was] intentionally not letting these big moments be overtaken by needle trouble, with a lyric that maybe takes people out of it, or [a song that’s] big enough that people have such an association with it,” Martin tells NYLON. Still, throughout the show’s 12 charged episodes, there are plenty of musical cues that arrive to bolster important moments after-the-fact. In episode four, when Francis and Nick finally get a moment to themselves in the car during their sun-soaked vacation right as their relationship seems to be blossoming, the sweet, dulcet tones of PinkPantheress come in to sonically light the scene. Later, in episode 10, when Francis and best friend Bobbi surprisingly kiss outside of a bar, a Wyvern Lingo cover of No Doubt’s “Just A Girl” cheekily plays.

For Martin, the songs were chosen in full service to the emotional dynamics of a scene — with having no music an option, too — making every song that does pop up all the more significant. Joanna Newsom’s youthful “Peach Plum Pear” is the song Nick sends Francis on the show, despite Rooney’s novel not specifying. And artists the likes of Mitski, James Blake, and Tori Amos still get prominent placements, allowing some big pop cultural voices to intrude in the scene.

Below, NYLON caught up with Martin as she broke-down the choices and intentions behind some of the show’s most poignant musical moments and how they serve to move the story forward, from Irish musician CMAT to that devastating original Phoebe Bridgers song.

This was a really tough one because it [opens the show] and is setting the tone. At the beginning, we had something that was much more wistful. And then it was like, actually, first of all, this isn't Normal People, but also these characters haven't earned that yet, that wistfulness and the emotion. So we wanted to do something that set the scene for the series, and set Dublin up as well. I don't know if you know CMAT, she's so amazing. She's just got this great wry tone. She writes comedic lyrics, but also they're quite profound as well. The one that we had before was more about the relationship and the feeling between the two of them, and we felt like this had a rhyminess about it, and it's just a great song. So that was the logic behind that one.

Episode 4: “All My Friends Know” - PinkPantheress

Sometimes you don't think of the lyrics and sometimes you do. I don't always have that in my mind, but this [song] does speak to what's going on. I think in the book, it's like something that's on their iPod. When you see the scene, it's just something that they play. It's quite a pivotal scene: They're sitting in the car that day at the beach and they've just reconnected and the sun is setting, it's so atmospheric, you know? And I just love the PinkPantheress there. It's funny, when I read this script I think I had Jessica Pratt [in mind for this scene] but it probably would've been a bit too sad and nobody went for it. PinkPantheress, she's so amazing. I think she does that too, but it's also got the lyrical reference that just works really well. There's samples in that one, so that was a bit of a roundabout clearance, but it was fine. I've had a lot worse.

[This song] was totally perfect. That was just there from the beginning. It's like, that's the moment that [the show’s] been building up to, hasn't it? And then [Bobbie] finds out [about Nick and Francis], it's like, "Oh!" So I think tonally, that was just right. I think [the song] also has a bit of… I suppose there is this melancholic tone obviously, but a bit of like “uh-oh” to it, maybe.

Episode 6: “it would feel like this” - girl in red

I know that the cast felt really strongly that one of [girl in red’s] tracks would be in the show. One of her songs was on a list from Lenny [Abrahamson, the director], and I had a couple as well, so I think everybody really felt that she was right for this series. We just put that one up there and it just worked. Sometimes it's just like, "Yep, that works in the scene, she's right for it." Instrumentals sometimes, it's nice to not always have to work around the dialogue or the lyrics of a song. When your focus is ultimately the scene, you don't want to lead people too much. Sometimes there'll be a great track with its feel, but sometimes the lyrics will get in the way. And it's nice then for people to go, "Oh, I didn't actually realize it was girl in red..." It's slow paced, it gives time for the audience to live with these characters, and sometimes we don't want to push this in people's faces. You just want people to come to it themselves, or let the drama speak for itself.

This came from Leanne [Welham, the director] and Sarah, a wonderful editor. I think it was something that Leanne was a big fan of so she particularly wanted to see that. [You think,] "Okay, let's not be super obvious,” but at the same time if you feel like something works, it works. And I think it's a point in the series where there's been ups and downs in the love affair and you're speaking to that with the lyrics here.

There's definitely a foreshadow of maybe, you don't want the audience to feel comfortable [with their relationship]. If you think about their affair and their relationship, it's not straightforward. It’s not happy. She's not happy and he's not very happy, and so I think if you had something unequivocally joyous, [it wouldn’t work].

The script and the book [mentions] a Joanna Newsom song, but then “Peach, Plum, Pear” has the kind of... “You were knocking me down with the palm of your eye,” and [Nick and Francis] just had this big fight. The inclusion of her as an artist, I suppose, is to show that there's something more to Nick, or to give him an extra dimension that again, you don't really get to know. He's being dismissed but it shows that there's intellectual depth. [The song] didn't have the usage in the script. In the script, Francis doesn't play it, she just looks at it and goes, "Ugh." But then when we put [the song] up against this picture, I just love it. The lyrics have got that reference to their fight, but again, they're quite bleak or opaque. And also I think there's a little bit of counterpoint to it because there's something about the melody that can be a little bit less melancholic, but it plays a little bit. That was a big clearance. Everybody was like, "We have to have this."

We loved [this song] because it's just like, boom! The timing of it, the way it just pops at the start of that scene… I think there was chat about, let's try to explore tracks from not just the last three or four or five years, and [“Cornflake Girl”] just worked. There's the lyrical reference, but also just how it marked, boom, from the scene before. So it just had a great energy to it. It's one of my favorites. Unexpected.

It's funny because we were obviously in the Phoebe Bridgers world and I was like, "How do we feel about going with another Phoebe Bridgers track?" Because we have “Sidelines,” but if you really like something you just think, "Well..." It's just a really poignant moment, isn't it? It's just like, "Oh God, they obviously really love each other, and now they just can't make it work and it's been so bad for Francis.” Everything's blown up.

Phoebe Bridgers has just so much emotion and melancholy in her voice in this composition. Lyrically, it's sort of like, "What have I done?" Now, suddenly [Francis] realizes where she is, what the consequences are of her actions. I love that because then it comes into [episode] 12 and she just then suddenly kind of gets it, like she's gone through that, and I think lyrically it speaks to that. She's realized that she has the ability to hurt people. So I suppose that was the choice there.

That song for me, lyrically, it's Francis's journey, isn't it? That's why, I think, it works so well. I mean, it's got the feels too, but it also is like how she is on the sidelines. Depressed and not really good at vocalizing her emotions. What’s going on in her life with her father, and so I think maybe this is just really good synergy there.

I think Hulu approached Phoebe Bridgers, that's how it came about, but she's a fan of Sally Rooney, and so she was certainly interested, and I guess she was a fan of Normal People. I certainly didn't ring her up in L.A. I don't think there were loads of pointers. I think it was just like, "Well, we respect you as an artist, we know this is what you're going to do." But I think she very much just responded to the material in the purest way.