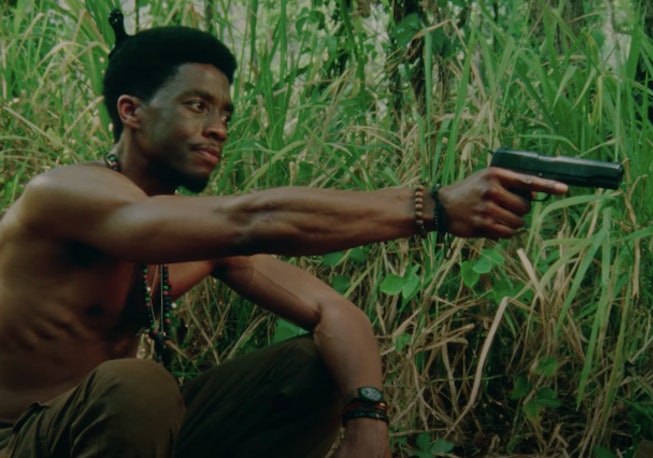 After decades of being ignored by the establishment for his provocative but necessary work, Spike Lee finally became a (competitive) Oscar winner thanks to his Best Adapted Screenplay win for the BlacKkKlansman script. Now, the prolific director is diving into his next high-profile effort, Da 5 Bloods, a Netflix feature film that promises the careful interrogation of race relations that viewers have come to expect from all the director's films. After a year and a half of buildup, Lee's newest joint unveiled its first trailer today.

Described as a "war adventure comedy drama," Da 5 Bloods follows four African-American war veterans as they return to Vietnam to search for their fallen squad leader while also hoping to find buried treasure. The film stars Get Shorty's Delroy Lindo, Scandal's Norm Lewis, and The Wire's Clarke Peters and Isiah Whitlock Jr. as the aforementioned veterans, The Last Black Man in San Francisco's Jonathan Majors as Lindo's concerned son who joins their expedition, and the Black Panther himself, Chadwick Boseman, as the fallen squad leader. The cast is rounded out by French actress Mélanie Thierry, Richard Jewell's Paul Walter Hauser, The Last Jedi's Van Veronica Ngo, Mission: Impossible's Jean Reno, and Jasper Pääkkönen, who previously worked with the director on BlacKkKlansman.

According to the trailer, Da 5 Bloods will be set on at least two timelines, following the veterans in the past as they try to survive the madness of war and also in the present as they make their return to the scene of the crime. The trailer is also spliced with historical footage of Nixon's resignation speech as well as photos of protestors holding up signs that say "War Criminal," making it safe to assume that Lee is just as interested in exploring war as a concept as he is in telling a story about the people who were forced to participate in it.

The film marks the second collaboration between Lee and Netflix. Previously, the pair worked on Lee's She's Gotta Have It series (itself a TV adaptation of his seminal debut feature), which ran for two seasons before getting (unceremoniously) canceled ahead of its third. Let's hope this film proves more fruitful.

Check out the trailer below. Da 5 Bloods premieres on Netflix on June 12th.