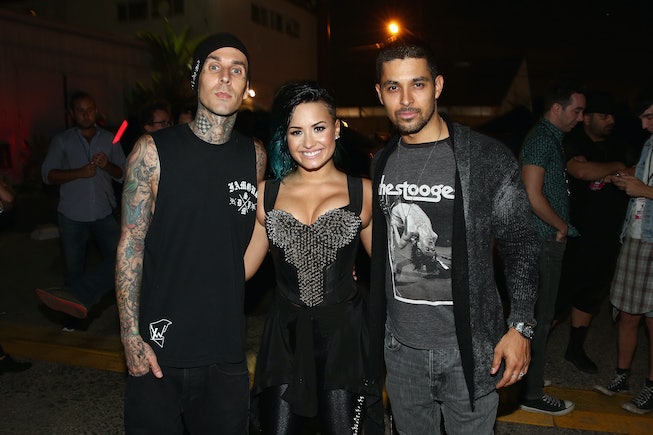 Between reunions from My Chemical Romance and and new Bright Eyes music, you don't need me to tell you that the emo music renaissance is alive and well. Now, pop star Demi Lovato is honoring the Rawr xD lifestyle with the help of pop-punk figurehead and celebrated emo drummer, Travis Barker. Lovato and Barker collaborated on a new remix of Lovato's single, "I Love Me," giving it a proper emo makeover worthy of its own jagged, eye-covering bangs.

Not only is the new version of "I Love Me" updated with blaring guitars and Barker's rapid-fire drumming that helped make Blink-182 iconic, but the accompanying lyric video is a complete throwback to 2003 Internet habits. The lyrics flash across MySpace's interface, and include seminal early-aughts motifs like customized cursors, skulls, and of course plenty of shimmering Blingee gifs.

Lovato released "I Love Me" back in March, explaining that the uplifting song was born of much darker personal experiences with her old manager and team. Lovato regaled tales of how her old team would routinely sweep her green rooms and hotel rooms to make sure that she wasn't eating sugar, even as she was recovering from an eating disorder. "I lived a life for six years that I felt like wasn't my own, because I struggled really hard with an eating disorder, yes, and that was my primary problem, and then it turned into other things," said Lovato during an appearance on The Ellen Degeneres Show on March 5. "But my life, I just felt was — I hate to use this word, but I felt like it was controlled by so many people around me."