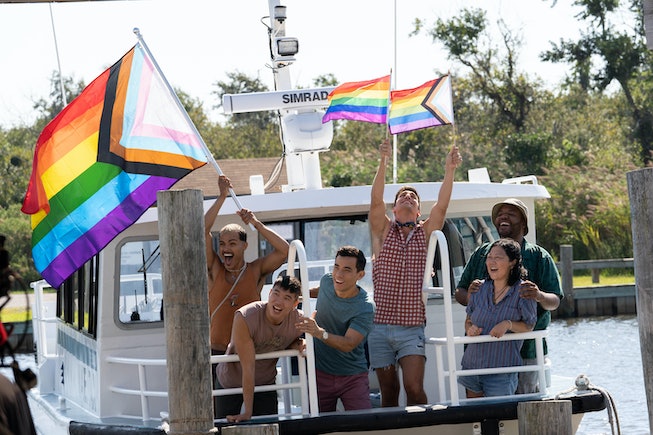 Last week, Hulu released Fire Island, a Pride and Prejudice-inspired romcom about a couple of gay Asian men trying to find love (or at the very least, a bit of hot sex) while vacationing on the titular queer oasis. The film, which was directed by Spa Night’s Andrew Ahn and written by Joel Kim Booster (who also stars), has been showered in near-universal praise, from both critics and viewers alike. But without fail, there will always be someone who takes issue with a good thing. And thus, we ended up with an egregious tweet by media personality Hanna Rosin, calling out Ahn and Booster’s film for failing to meet the requirements set by the popular Bechdel Test.

“So @hulu #FireIslandMovie gets an F- on the Bechdel test in a whole new way,” the Editorial Director for New York Magazine’s podcast wrote in a since-deleted tweet earlier this week. “Do we just ignore the drab lesbian stereotypes bc cute gay Asian boys? Is this revenge for all those years of the gay boy best friend?”

Naturally, the response to Rosin’s tweet was swift and vicious, with many people calling the writer out for her bad-faith application of this particular test onto a film that doesn’t really call for it.

The Bechdel Test stems from a 1985 comic strip in which Dykes to Watch Out For cartoonist Alison Bechdel shows two women talking to each other about a potential trip to a movie theater. When one is asked whether she’d want to see something, the other woman responds, “I only go to a movie if it satisfies three basic requirements. One, it has to have at least two women in it, who, two, talk to each other about, three, something besides a man.” These measures came to be known as the Bechdel Test, and since then, they’ve been applied to countless films to make a point about Hollywood misogyny.

And in a very small certain way, Rosin has a warped point. As a movie about gay men, there are not many women in it (yes), and there aren’t any scenes between them talking about things besides men (yes). So, maybe Fire Island doesn’t pass the Bechdel Test. But, then again, it’s also a movie about gay men — and more specifically, gay Asian men, a community that has historically never held a fair share of the Hollywood spotlight. Furthermore, it takes place on an island widely known as a safe space for gay men…precisely because the island is full of only gay men.

So, at the end of the day, do the results of the test even really matter?

While The Bechdel Test was indeed created to measure the presence of women in film, contextually, it was also created to disrupt the predominant trend of movies about straight white men, who are already overrepsented. When a film about a marginalized community is created, it shouldn’t be expected to cover every other marginalized community. Instead, it should be celebrated.

For what it’s worth, the discourse has spiraled out enough for Alison Bechdel herself to chime in — thankfully, to come to Fire Island’s defense. “Okay, I just added a corollary to the Bechdel test,” she tweeted on Tuesday, just hours after Rosin walked her initial claim back in an apology thread. “Two men talking to each other about the female protagonist of an Alice Munro story in a screenplay structured on a Jane Austen novel = pass. #FireIsland #BechdelTest”

Fire Island is available to watch on Hulu now.