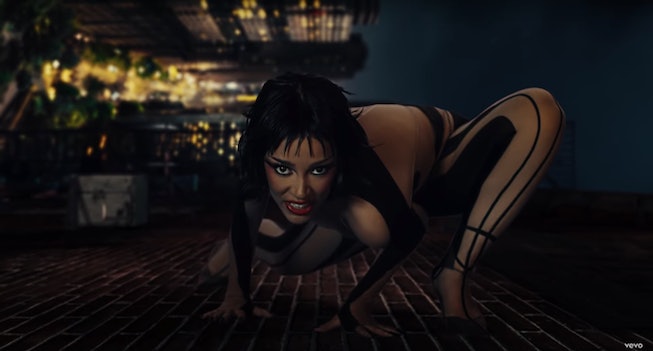 Doja Cat’s sophomore album Hot Pink may have been released back in 2019, but the pop star is still churning out singles from it, thanks to the unrelenting TikTok machine. The latest of Doja Cat’s songs to blow up on the micro-video platform is “Streets,” its sinuous and pulsating beat providing the sound for the red-hued and NSFW #SilhouetteChallenge which swept the platform earlier this year (before people discovered a way to remove the red-light filter). Now, the pop star is bringing the challenge back full circle by attempting it herself — but with a dark twist — in her new music video for “Streets.”

The video opens in classic Silhouette Challenge fashion. As cheery music plays, Doja Cat is modeling inside a luxury store’s street-facing glass display case, though when the beat kicks in the lights dim, it quickly transitions into the challenge. A man outside watching, played by American actor Kofi Siriboe, is mesmerized by the display, and the video suddenly takes a dark turn. Doja Cat lures the man into a cavernous warehouse where she’s trapped several other victims in a huge web of silk. It’s revealed that she’s some sort of man-luring spider — there’s one unnerving scene where she’s rapping into the camera while crawling forward disjointedly like the insect. It all leads to a (sort of) apocalyptic ending that’s worth experiencing on your own, below.

Since the release of Hot Pink, Doja Cat’s been busy performing genre-bending sets at award shows, as well as hopping on new remixes by her peers. She recently joined Megan Thee Stallion on Ariana Grande’s raunchy “34+35” remix. On Sunday, the singer will make her stage debut at the 63rd Grammys, where she’s nominated for Best New Artist, and her viral hit “Say So” is up for Record of the Year and Best Pop Solo Performance.