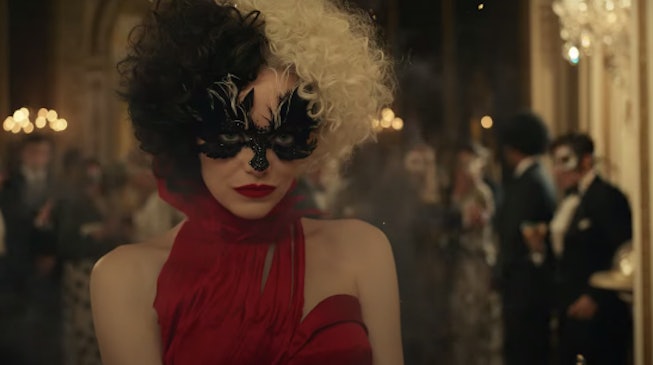 These are the words used to describe a young Cruella de Vil, years before she would go on to terrorize a nice couple and their gorgeous black-and-white-spotted puppies in the 1996 Disney classic 101 Dalmatians (and its slightly less classic sister, the 2000 sequel 102 Dalmatians). In those films, Cruella was memorably portrayed by the always incredible Glenn Close. But now, more than two decades later, the famed villain is getting her very own prequel origin story, where she will be played by former NYLON cover star (and The Favourite standout) Emma Stone.

It feels like forever since we were offered a sneak peek of the film, way back in August 2019, when Disney shared the first image of Stone in Young Cruella drag. (The Oscar winning actress was first confirmed for the role in 2018, after being "in talks" for it since 2016.) But now, the highly anticipated film finally has an official theatrical release date (May 28, 2021) and, as of this morning, its first trailer.

Directed by I, Tonya genius Craig Gillespie, Cruella will focus on "the rebellious early days of one of cinemas most notorious – and notoriously fashionable – villains, the legendary Cruella de Vil," according to Walt Disney Studios.

Set during the punk rock revolution of 1970s London, Cruella "follows a young grifter named Estella, a clever and creative girl determined to make a name for herself with her designs. She befriends a pair of young thieves who appreciate her appetite for mischief, and together they are able to build a life for themselves on the London streets. One day, Estella’s flair for fashion catches the eye of the Baroness von Hellman, a fashion legend who is devastatingly chic and terrifyingly haute...but their relationship sets in motion a course of events and revelations that will cause Estella to embrace her wicked side and become the raucous, fashionable and revenge-bent Cruella."

"From the very beginning, I realized I saw the world differently from everybody else. That didn't sit well with some people, but I wasn't for everyone. I guess they were always scared that I'd be...a psycho," intones Stone in the just-released trailer, right before making her way into a swanky ball, dressed in a white robe that combusts into flames, revealing a slinky red ballgown underneath. "But a new day brings new opportunities and I was ready to make a statement," she voices over. Dressed in the finest garments, Stone hot-wires cars, cries on a motorcycle, and spray-paints her name across the walls of a rather official looking building.

In other words, we can safely expect Cruella to provide plenty of mischief, slightly less than 101 Dalmatians, and at least a few subtle nods to famous punk-rock London designers like Vivienne Westwood. Stone will be joined by fellow Oscar winner Emma Thompson as Baroness von Hellman and Richard Jewell lead Paul Walter Hauser as Horace. Other cast members include Game of Thrones' Joel Fry, 1917's Mark Strong, and The Good Place standout Kirby Howell-Baptiste.

Check out trailer below. Cruella hits theaters on May 28.