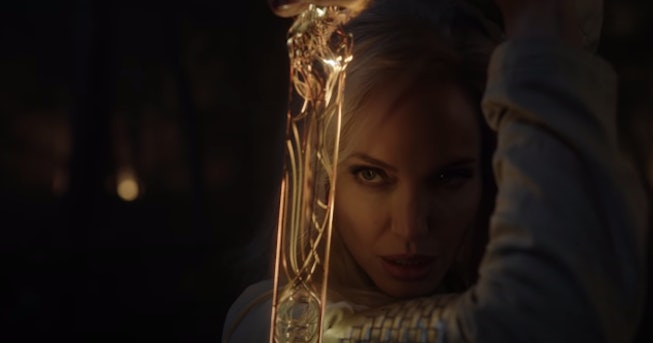 Disney has been rolling out new Marvel-themed material since the beginning of the year (WandaVision in January, The Falcon and the Winter Soldier in March, and Loki this coming June). But it does feel like the larger Marvel Cinematic Universe has been on pause since the last box office-breaking film, Spider-Man: Far From Home, hit theaters in July 2019. The MCU is all set to kick off its “Marvel: Now Back In Theaters” run with the Scarlett Johansson-starring, Rachel Weisz and Florence Pugh-introducing Black Widow in July. But nothing in the MCU feels more exciting than the upcoming release of Chloé Zhao’s Eternals, which hits theaters in November and just received its absolutely stunning trailer today.

Eternals is a time-hopping, world-spanning story about an immortal race of godlike alien beings and this trailer introduces many of the film’s new characters. Up first is Sersi, who MCU president Kevin Feige has previously described as the film’s ostensible lead. Played by Crazy Rich Asians’ Gemma Chan, the character is “an empathetic Eternal who possesses the ability to manipulate matter” and is currently posing as a museum curator on Earth. In the trailer, she can be seen talking to Game of Thrones’ Richard Madden, who plays Ikaris, “the all-powerful leader of the Eternals who can fly, shoot beams of cosmic energy from his eyes, and has super strength.” He also considers himself the most worthy successor to Iron Man and Captain America, who both left the MCU after the Phase Three closer Avengers: Endgame.

Eternals will also feature two history-making characters: the MCU’s first deaf superhero in Lauren Ridloff’s “super-fast” Makkari and the MCU’s first openly gay superhero in Brian Tyree Henry’s “intelligent inventor” Phastos. The trailer is narrated by Salma Hayek’s “wise and spiritual leader” Ajak, who warns, “We have watched and guided. We have helped them progress and seen them accomplish wonders. Throughout the years, we have never interfered. Until now.”

With a cast this stacked, it’s hard not to get excited for Eternals. But beyond the acting, Eternals also looks like a visual treat, with the trailer offering Marvel fans their first extended look at the captivating filmmaking done by Zhao. Like the sprawling landscapes frequently seen in recent Oscar winner Nomadland and Zhao’s previous breakout hit The Rider, Eternals features majestic shots of expansive lands that stand in stark contrast to the effects-heavy worlds of other MCU projects. The recent history-making director notably had to convince Kevin Feige to let her shoot these scenes on location (instead of in front of a green screen), and from the looks of it, the trust Feige and Marvel put into the otherworldly talented filmmaker will pay off.