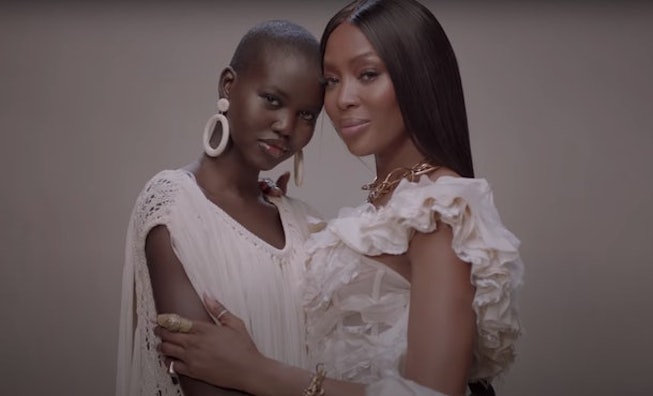 Beyoncé's highly-anticipated visual album Black Is King is out now on Disney+, and as she has in the past, the singer enlisted several of her celebrity friends to appear in the companion film to The Lion King: The Gift. In addition to daughter Blue Ivy, whose cameos made the internet's stone-cold heart melt, Black icons like Naomi Campbell, Lupita Nyong'o and Pharrell Williams all showed up in the story about a young African king on a hero's journey back home.

The aforementioned Blue Ivy makes several appearances in Black Is King, including her singing the previously released "Brown Skin Girls." But several members of the rest of Beyoncé's family make an appearance in the film, including twins Rumi and Sir, Jay-Z, and Miss Tina Knowles Lawson.

Throughout her mega successful solo career, Beyoncé has paid homage to her girl group roots, featuring her former Destiny's Child bandmates in her Coachella Homecoming performance and in several other videos and songs. Appearances by Kelly Rowland in Black Is King include a heartwarming moment between the two saying, "I'll never trade you for anybody else."

The Lion King: The Gift Artists

Black Is King has several connections to The Lion King: The Gift, the Beyoncé-curated soundtrack to last year's remake of Disney's classic film, The Lion King, so it only makes sense that Bey also released the deluxe addition to The Gift along with her new visual film. As a result, many of the musical artists featured on The Gift also appear in Black Is King, many of whom (but not all) are of African origin: Pharrell Williams, Wizkid, Tiwa Savage, Jessie Reyez, Tierra Whack, Moonchild Sanelly, Mr. Eazi, Ninja, Lord Afrixana, Yemi Alade, Shatta Wale, Salatiel, and Busiswa.

There are so many more talented people involved in Black Is King, from the dancers to the actors portraying characters from The Lion King. To see them all, find out how to watch the film here.