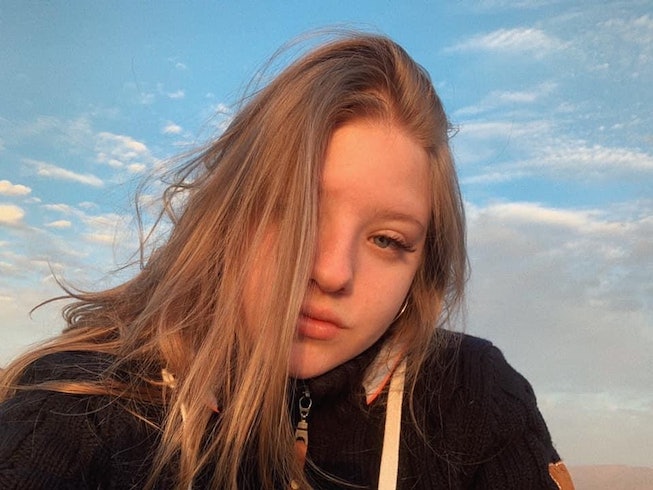 Francesca Scorsese has spent a lot of time on film sets. When you are the daughter of one of the world's most famous directors (her dad is Martin, in case you didn't catch that last name), it kind of comes with the territory. But for all the hours hanging out in the director's tent, the 20-year-old — who is currently studying filmmaking at New York University — never expected to be on the other side of the camera. That is, until the script for We Are Who We Are, HBO's new coming-of-age series helmed by another famed director, Luca Guadagnino, was brought to her. Two auditions later, and suddenly she was off to Italy for five months to shoot alongside the likes of Chloë Sevigny, Jack Dylan Glazer, and fellow newcomer Jordan Kristine Seamón.

The experience was, needless to say, uncharted territory for the college student. "I've only really been on my dad's film sets, so I only know his directing style and what it's like there," she says. Luckily, she found some familiarity in her character, Britney, a wildly confident, feisty teen who reminds the actress of her younger self. "For some scenes, I was very nervous beforehand — I was like, 'Oh my god, this is crazy,'" she says. "But then when I would do it, it came kind of naturally." Now back home in her native New York City, where she is completing classes online, Scorsese reflects on her whirlwind audition process, filming in Italy, and her future acting plans, here.

How did you first hear about We Are Who We Are?

I've not really pursued acting before this; I'm at NYU for filmmaking. Then Carmen Cuba, the show’s casting director, contacted my family's assistant and was like, “I found Francesca on Instagram and I'd really like if she could audition for a film.” I auditioned for that and I was like, “How did this person find me? I don't understand what's going on.”

I didn't get the role, but I'm very happy that I didn't. Maybe a week later, she sent over We Are Who We Are and told me she wanted me to audition for Britney. It was actually my first in-person audition and I was terrified; I don't really like attention too much, especially when it's all on me. I had to flirt with this random person and was so uncomfortable, but I did it. And then a few days later, they asked for a call back and a few days after that, I was in class and I was told that Luca wanted to Skype me. I ran out into another room and I took out my computer and Luca hops on Skype and was like, “We'd love it if you'd be a part of the production.” I really couldn't fathom the fact that I could have gotten the role.

Had you ever met him before, even in passing?

No. It was so crazy.

What was the character description of Britney when you first read it?

It was a flirtatious, confident 14-year-old girl with platinum blonde hair dyed pink who values friendship over everything. I was like, “I would die to play somebody like that.” At the time, I was not confident whatsoever; like, this girl is so opposite from me. But she kind of reminded me of myself when I was 14 because I had swapped schools and was having a miserable time at the first school that I was at. And then when I swapped schools and was like, "I should just be myself and, whatever, be crazy.” I just didn't care. I just went nuts. I was very loud and constantly talking to random people, for no reason. And it helped so much. I really came out of my shell. So, I immediately thought of that.

When you stepped into the role, did you feel you got that confidence back?

Yes, definitely. For some scenes, I was very nervous beforehand, but then when I would do them, it came kind of naturally. I don't know how that works.

What was it like to be shooting on location in Italy for your very first acting role?

I didn’t know any Italian besides, like, “ciao.” My best friend actually speaks Italian, so I hear it a lot and I’m familiar with some words, but when I went out there, she came with me and was basically my translator. Honestly, it was all amazing. I miss it very much. Everyone there is so nice. You can just strike up conversation with random people in the street. It's so beautiful there. It was like a vacation; I was obviously working, but it was kind of like a summer camp. It was all us kids and we were all having so much fun. We all really bonded. We became a little family at the end.

How was that first day on set, shooting your first scene?

It was terrifying. I had just met Jack and, oh God, Chloë too. My first day was the beach scene [in the pilot] where I'm telling Jack to walk for me. I was so nervous to shoot because I was in a bikini, and, again, I'm not super confident, especially in myself and in my physical appearance. I have become far more confident about it, but at that time I was like, “I have to be in a bikini and I have to act for the first time?!”

Did you walk away from this project wanting to do more acting?

I still really couldn't fathom the fact that I got the role. I was really happy because Luca had told me afterwards that he didn't know my last name until he cast me. I was really thankful about that because I was nervous that was the reason that I'd got it; sadly that's how things happen a lot. When I got back [from Italy], I was like, “I'm having acting withdrawals. I want to be on set right now.” I started having a little crisis. It was like, “Do I even want to be doing [filmmaking]? I want to just be acting.” But, obviously I love filmmaking.

Has being on the other side of the camera changed your approach to filmmaking now?

I think so, a little bit. I do believe that to be a good director, you have to have experience as an actor, just to put yourself in their shoes and know what they're experiencing and going through, especially when they look up to the director to tell them what to do. That’s important.

How has it been promoting the new show, while quarantined in your apartment and still doing school online?

Everything is crazy right now. I did an at-home photo shoot, and had to do it against this wall right here. This wall has gotten a lot of action this past month.