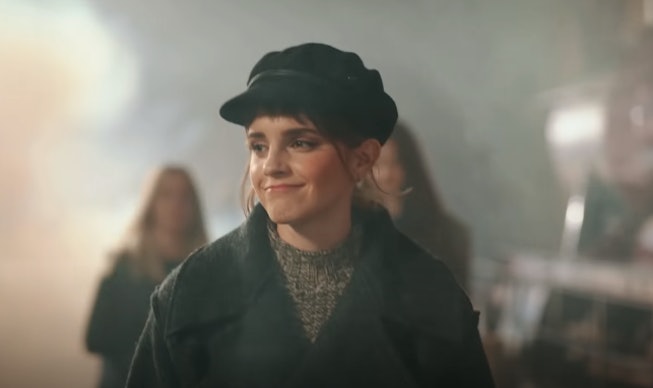 At the beginning of this year, sources confirmed that HBO Max was developing a series based on Harry Potter. Months later and there’s still no word on what’s happening with this series — if anything is happening at all. Nevertheless, one thing was always certain: it was only a matter of time before HBO Max gave subscribers something set in this magical universe of IP gold. Next year, the streaming service will premiere Harry Potter: Return to Hogwarts, a reunion special that will “tell an enchanting making-of story through all-new, in-depth interviews and cast conversations.”

Set to air on New Year’s Day, the reunion is being pegged to the upcoming 20th anniversary of the franchise’s breakout first film — and to mark the momentous occasion, Warner Bros. is pulling out all the stops. Most importantly, the special will mark the official reunion for the franchise’s core trio. Yes, that means Harry Potter’s Daniel Radcliffe, Hermione Granger’s Emma Watson, and Ron Weasley’s Rupert Grint will all take to the same stage once again to revisit the trials and tribulations their beloved characters went through over two decades ago.

And the fun doesn’t stop there. The trio will be joined by a plethora of other stars from throughout Harry Potter’s eight-film run. In addition to Chamber of Secrets director Chris Columbus, fans can look forward to the return of other Hogwarts students, including Tom Felton, who played Draco Malfoy; Alfred Enoch, who played Dean Thomas; Matthew Lewis, who played Neville Longbottom; Evanna Lynch, who played Luna Lovegood; James and Oliver Phelps, who played twins Fred and George Weasley, respectively; and Bonnie Wright, who played youngest Weasley child (and eventual mother to Harry Potter’s children), Ginny Weasley.

Some of the film’s returning adults include Helena Bonham Carter, who played Bellatrix Lestrange; Robbie Coltrane, who played Hagrid; Ian Hart, who played Professor Quirrell; Mark Williams, who played Arthur Weasley; and Jason Isaacs, who played Lucius Malfoy (though, unfortunately, I doubt he’ll be breaking out his luxurious laid blonde bundles for the occasion).

BAFTA winner Imelda Staunton, who played Margaret Thatcher stand-in Dolores Umbridge (and will soon take over for Olivia Colman as The Crown’s Queen Elizabeth), is also slated to stop by; as is Oscar winner (and infamous Timothée Chalamet awards-stealer) Gary Oldman, who played Harry’s godfather Sirius Black. Even Lord Voldemort (“He-Who-Shall-Not-Be-Named” himself), memorably (and menacingly) played by Ralph Fiennes, is making an appearance.

And fans at home aren’t the only ones who are excited. “It has been an incredible journey since the debut of the Harry Potter and the Sorcerer’s Stone film, and witnessing how it has evolved into this remarkable interconnected universe has been magical to say the least,” said Tom Ascheim, Warner Bros.’ President of Kids, Young Adults, and Classics. “This retrospective is a tribute to everyone whose lives were touched by this cultural phenomenon — from the talented cast and crew who poured their heart and soul into this extraordinary film franchise to the passionate fans who continue to keep the Wizarding World spirit alive 20 years later.”

Casey Patterson, an executive producer on the film, echoed these sentiments. “There’s magic in the air here with this incredible cast, as they all return home to the original sets of Hogwarts, where they began 20 years ago,” the Casey Patterson Entertainment founder said. “The excitement is palpable as they prepare to take their fans on a very special and personal journey, through the making of these incredible films.”

Check out the first full trailer for the upcoming reunion special below.

NEXT UP
Culture
Jenna Ortega’s Childhood Hobbies Included Animal Autopsies
Culture
Remember When Gossip Girl Made The Quintessential Thanksgiving Episode?
Culture
The White Lotus Will Return For A Third Season
Culture
Paris Hilton’s Memoir Will Included Her “Most Personal Stories Yet”