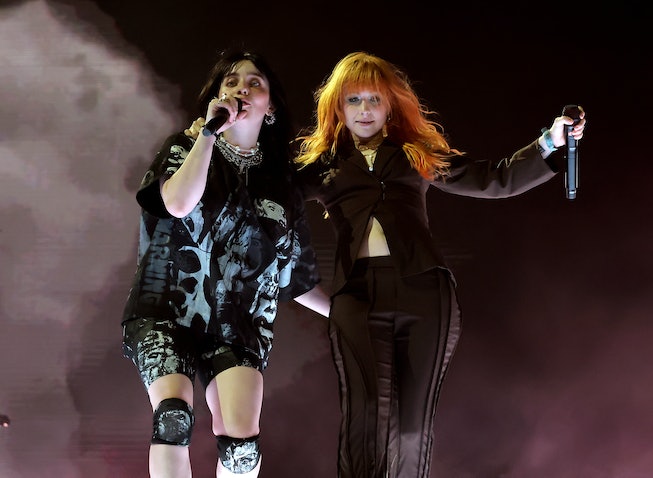 One of the biggest highlights of Coachella 2022 was when day 2 headliner Billie Eilish brought out Hayley Williams for a surprise acoustic rendition of Paramore’s biggest hit, “Misery Business.” Not only was it (egregiously) Williams’ first-ever performance at the Indio, California festival, it was also surprising given Williams’ previous stance on the popular and beloved track. Back in 2018, Williams announced she would stop performing “Misery Business” live due to a misogynistic lyric that now conflicted with her feminist beliefs (the lyric in question: “Once a whore, you’re nothing more”). And it turns out, Williams’ would’ve continued to keep that promise until she changed her mind last minute.

In a revealing new interview with The Guardian, the Paramore front-woman revealed that she actually tried to talk Eilish out of performing “Misery Business” ahead of their performance together. Ultimately, she gave in to the request after realizing that the performance and the song was bigger than her and her own beliefs about it.

“It shouldn’t be about me,” Williams told The Guardian about her decision to change her mind. “People grow and learn. I’d already called myself out and done a lot of work on the misogyny I’d metabolised as a young girl.”

In the interview, Williams said that a lot of her previous opinions about “Misery Business” have changed in general, citing her new perspective on the song as a result of the five year hiatus Paramore took as a band from 2018 until now. The distance gave Williams a chance to redefine her relationship to the band and its influential catalog of music, including with its most controversial song.

“Only now that we’ve felt lighter about the band, it’s like I don’t feel defined by that song,” Williams added, telling the Guardian that she now thinks of “Misery Business” in the context of when she invites fans on stage to perform the track with her and “live their best life for three minutes.”

“That’s what I feel defines our band, not these dramas and: ‘Is Hayley the perfect feminist?’ That was very heavy for a long time,” she said.

This realization also inspired Williams to write about this exact topic for a song on the band’s upcoming sixth album, This Is Why. The song explores “how you can’t control someone’s perception of you,” Williams told Guardian.

“How it feels to accept there are moments in your life where you were the bad guy or you said something that you didn’t even really believe – Misery Business – and that comes to define you for some people,” she continued. “What can you do except continue to grow and challenge yourself? The lightness that has come with that has been really cool.”

Elsewhere in the interview, Williams, Zack Farro, and Taylor York talked about how their relationships with one another also evolved during the break — and Williams and York confirmed the fan rumors that they’re now dating.

“After 15 to 20 years of fighting like a bunch of brats in front of the world, you eventually learn some coping skills and communication methods,” Williams said.

The band also teased their next single after “This Is Why,” describing the song as one addressing “the importance of battling compassion fatigue,” per Guardian.

After a long wait, Paramore finally released their first song since 2017, “This Is Why,” on Wednesday. The single is the first taste of their upcoming album which will be released on Feb. 10, 2023.

Before then, the band will embark on an intimate U.S. tour come October, hitting cities throughout the midwest with select dates in Los Angeles and New York City.

Read Paramore’s full interview with The Guardian, and see everything we know so far about their new album.