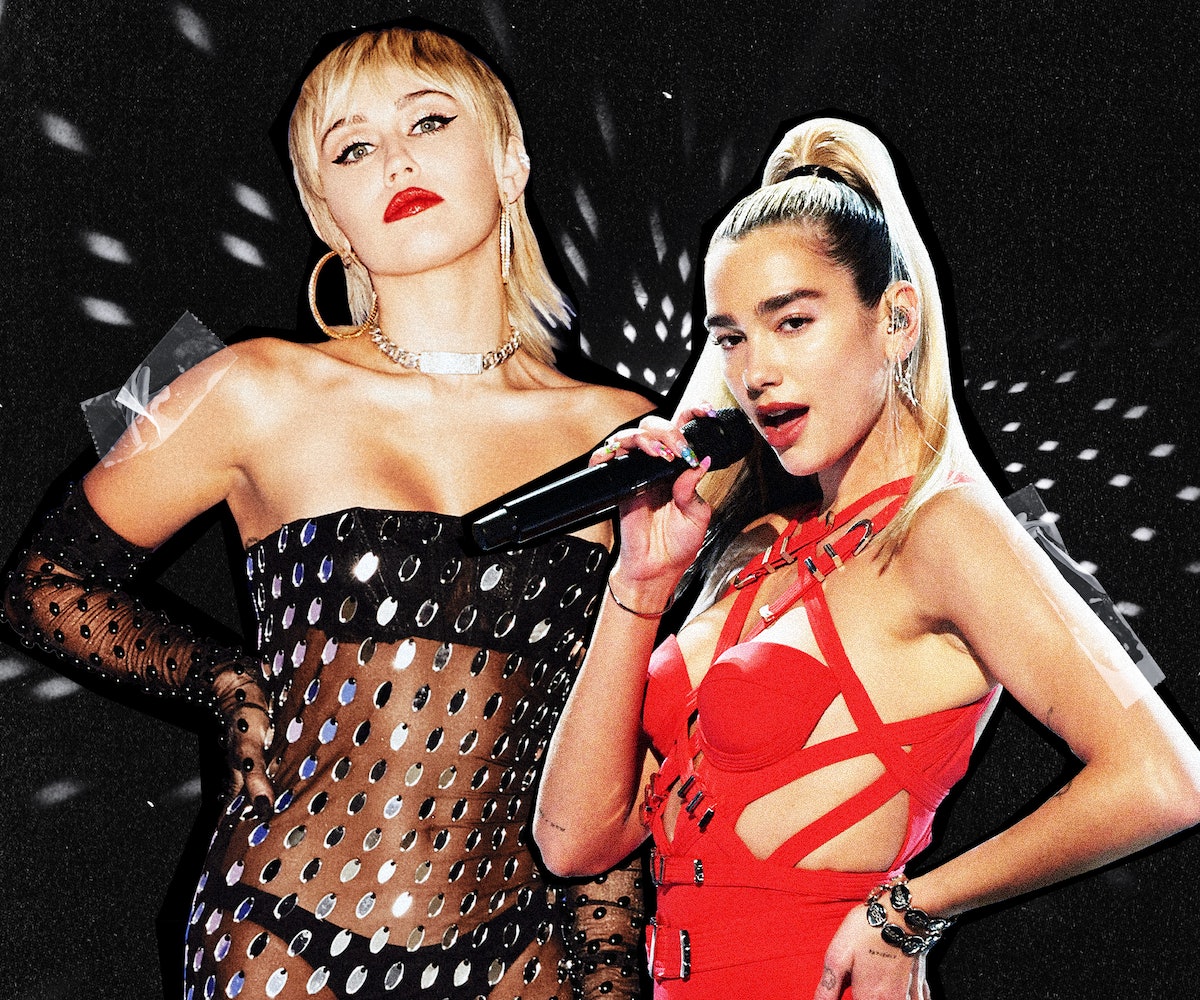 Pop is currently having a love affair with disco. When rappers like Roddy Ricch, DaBaby, and Megan Thee Stallion aren’t holding court at the top of the Billboard 100 chart, disco-inspired pop has made its way to No. 1. In May, the divisive Doja Cat scored her first-ever chart-topper with a remix of her slick, disco-guitared “Say So,” and a few months later, K-Pop notables BTS took that top spot with “Dynamite,” another disco-tinged track that doubled as their first release performed only in English.

Disco revivalism has been buoyed in pop, electronic music, and even indie rock since its inception, but the current crest of high-profile pop artists surging radio and streaming services with this sound feels a little different this time around. It’s a significant energy shift from the low-key, vibey music that’s been dominating pop music over the last few years.

In 2017, it seemed like the big pop banger was all but dead. Camila Cabello’s solo single “Crying in the Club,” a percussive dance track with an anthemic Sia-penned hook, was eclipsed by its restrained follow-up “Havana,” which relied on the hip-hop-leaning, lackadaisical sound of artists like Post Malone and Blackbear, as well as the vocal elasticity of rappers like Young Thug, who guests on the track. When it stayed No. 1 on the Billboard Pop Songs chart for longer than any track by a female solo lead had in over five years, its producer Frank Dukes tweeted, “Label heads and the people at radio told us this was not a hit when we first tried to put it out lol.”

In contrast, pop singer Dua Lipa has been something of a guardian angel of big stadium energy. Her 2018 single “New Rules” once felt like it would be the last high-gloss hit for a long time. With her 2020 album Future Nostalgia and follow-up remix LP, Club Future Nostalgia, Dua has doubled-down, releasing feel-good invocations of dance music’s ur-texts. Her massive lead single “Don’t Stop Now” channels OG disco and many of its modern antecedents like nü-disco, italo disco, and French house, also known as French touch. After its release in November of last year, what’s followed has felt like a new wave of disco nostalgia. But why now? And why disco?

Disco originated in the 1970s at a time of economic crisis. The post-World War II economic boom had come to an end and the United States began to endure a cycle of depression that included an oil crisis, a stock market crash, and a recession that caused high unemployment and simultaneously high inflation. At the end of the previous decade, the Civil Rights movement was disrupted by the assassinations of Martin Luther King, Jr. and Deputy Chairman of Black Panther Party Fred Hampton. Mass shootings and labor strikes abounded. With uncomplicated messages of feeling good (i.e., “Good Times” by Chic, “You Should Be Dancing” by the Bee Gees) and empowerment, like Gloria Gaynor’s perennial “I Will Survive,” hefty funk basslines, eclectic percussion via cowbell and woodblock, and four-on-the-floor rhythms, disco was the music of liberation when marginalized, working people — in particular for queer, Black, Hispanic and Latinx, and Italian-American people — needed it badly.

It’s hard not to see parallels between the disco era and the political and cultural shifts happening right now in America. A public health crisis and subsequent recession — one started just barely 10 years after the last — plus a reinvigorated movement for racial justice, fueled by demands of significant societal restructuring in the real service of long overdue equality, make for a heavy load to bear, especially if you’re unemployed or otherwise struggling.

“When shit’s going bad, people like to indulge in happier music,” says Ian Kirkpatrick, the producer of “Don’t Start Now,” and Lipa’s 2018 hit “New Rules.” “These songs are so uplifting. This is a way of escaping.”

An experience of dance floor escapism was actually what influenced “Don’t Stop Now” in the first place. In January 2019, Kirkpatrick and his “New Rules” collaborators Caroline Ailin and Emily Warren were working at Warren’s place in Wyoming and went out to a disco night to blow off some steam. “It was a bunch of white people in plaid shirts dancing to ‘YMCA’ in a weird bar,” he says. “That night we got completely wasted and the morning after we were like, ‘F*ck it, let’s do something disco-y.’ I wish I could tell you I had a vision and I knew exactly that it was going to work, but, no, we just went to disco night.”

"One of the biggest things people miss with disco is the depth of the musicianship — its funkiness and its dirtiness — and that it has a ground-level political message."

Still, finding inspiration on the dance floor is kind of the whole point. “Going out, dancing, and being with all sorts of different people living it up is in the DNA of disco,” says Eugene Cho, a co-founder of Brooklyn nü-disco band Escort. “That has grown outward into all other dance music today.”

Escort made waves in 2012 with the breathy, super-funkified “All Through the Night,” and found themselves in the company of other disco-influenced groups like Hercules & Love Affair and its offshoot, Jessica 6. A year later, French touch mainstays Daft Punk released Random Access Memories, a disco-funk odyssey that features genre pioneers like Chic bandleader Nile Rodgers and producer Giorgio Moroder, who is known for his prolific work with Donna Summer, innovative scores for films like Scarface and Flashdance and much more. While Daft Punk had previously been recognized outside of electronic music for their surprising videos and as an influence on Kanye West’s stunner-shade period, the album’s Pharrell Williams-sung lead single “Get Lucky” put the group on stage at the Grammys. Like so many classics of the genre, it will be played at weddings for the rest of our lives.

One of the things that makes disco so indelible is how it makes the familiar brand new. The genre is essentially a polyglot’s playground, full of possibilities for commingling different elements into something extremely fun with extremely tight musicianship. “There’s a whole mishmash of cultures — American funk, Latin percussion, European-driven synth programming — all speaking to each other in such an inclusive and fun way,” Cho says.

While disco is many things, what it's not can be represented by an oohwa-oohwa vocal ad-lib — the backbone of something like “Let’s All Chant” by the Michael Zager Band and bar mitzvah dance floors — says Adeline Michèle, who previously fronted Escort and released a solo album in 2018. “One of the biggest things people miss with disco is the depth of the musicianship — its funkiness and its dirtiness — and that it has a ground-level political message,” she says. “So many genres were invented by Black people that were making music to fight for something as a form of expression and rebellion. When it’s taken into another context, it’s difficult [to keep its history known], but that is a phenomenon that happens in pop culture. It’s up to people to do their research.” Someone she says is doing her research? Surprisingly enough: Miley Cyrus.

Cyrus’s “Midnight Sky,” released in August, is disco by way of Stevie Nicks’ “Edge of Seventeen.” Although the former Disney child star has come under fire for cultural appropriation in the past, Adeline Michèle says, “She’s listened to my music, she writes to me, she’s very respectful of what I do, and the fact that someone of her stature pays attention and gives back to artists of my level shows a lot about her.”

In a mini-doc about the making of the “Midnight Sky” video, Miley is detailed in her references, calling upon Pat Benatar and David Bowie as visual inspirations. She’s even more specific and studied when she talks about the acid-trip theme of the video: “You went to a Blondie show at CBGB with a hit of acid for later [in tow], head to an afterparty at Indochine, and pop the tab when you know you'll be at Studio 54,” she says. In the spirit of disco, she is scene-blending with intention and singing about her own liberation, describing the song as being “about taking back control of our own narrative.”

For Miley, that is about a fire that devastated her home with now ex-husband Liam Hemsworth, coming out as a pansexual, and getting sober. For others, the glamorous textures and self-assured lyrics — like that of “Don’t Stop Now” — are just as dignifying. That kind of ecstatic empowerment, of feeling righteousness, of feeling happiness, to just feel good, is why disco endures.

“It isn’t just a genre,” Cho says. “It’s the soundtrack to some of the best moments of all our lives and the driving force behind it.”