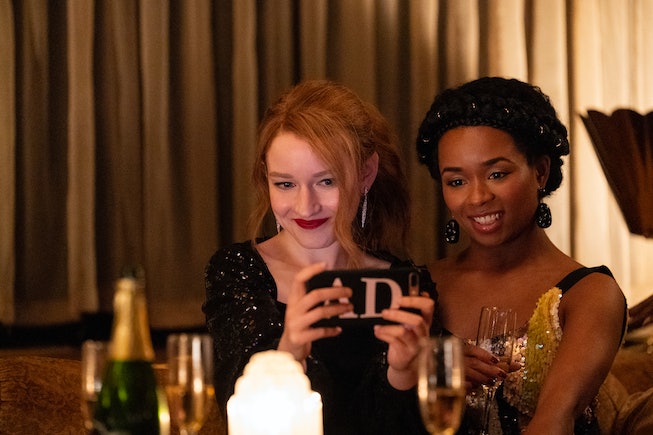 Scam TV has reached a peak in the past few years. Billy McFarland’s Fyre Festival, the LuLaRoe leggings pyramid scheme, and even the lone wolf Tinder Swindler have all gotten their documentary due; now, Netflix’s long-awaited Inventing Anna, about high society Manhattan grifter Anna Delvey (aka Anna Sorokin) has debuted on streaming.

The series stars Ozark’s Julia Garner in the leading role of Anna, while Anna Chlumsky plays Vivian, a stand in for New York Magazine reporter Jessica Pressler, who broke the original story. While much has been written, said, and theorized about Delvey and her motivations for committing crimes that eventually landed her in Rikers, the people around Anna paid their own price for knowing her.

Alexis Floyd plays Neff Davis, who was working at the concierge desk of the swank 11 Howard Soho Hotel when Delvey began staying there. Davis became a friend of Delvey’s and soon found herself entangled in her world of scamming. NYLON caught up with Floyd, Zooming from her New York City apartment, to talk about stepping into the Shondaland universe, portraying a living character, and why scammer stories are so appealing to us.

How did your involvement with Inventing Anna come to be?

I actually had not even heard of the Anna Delvey saga, which is sort of wild. I must be one of the six people on earth that didn't know who she was. I'm not totally surprised, I'm a little bit of a social media recluse.

Once I got the script, it was extraordinary that even if you just type her first name, I mean, Google launches Delvey, Sorokin, New York, German, Russian. It was flooding towards me at lightning speed. I spent a lot of my time prepping for the audition just deep in the dark corners of the internet trying to figure out, not just who she was, but who people thought she was. She really created this almost ghost story type allure.

That was my first way in, and then after the audition, I remember I was taping with a friend and sometimes it just goes like this, but I remember my friend saying, "Yeah, you know what? I don't know that that was one of our best." And I was like, "Oh, yeah. Okay, sure." But was kind of heartbroken because I really loved Neff.

But then a couple weeks later, my management called and said, "Shonda saw your performance and she actually doesn't even need to call you back. She just wants to get on the phone with you because she's doesn't know who you are." I had never been in for a Shondaland piece before. We got on the phone and she was like, "You really sounded like Neff. How did you get her sound? It's not really out there." I told her, and it remains true throughout the process, that the writing is imbued with her sound. She has this rhythm. She's almost got catchphrases. She just, she really knows who she is, and she speaks as colorfully as she dresses, as colorfully as she moves, and I really was excited to celebrate that.

That must have been so exciting.

Yeah, a couple days later I was in intermission for Inheritance, one of the Broadway previews, and I quickly checked my phone off airplane mode and I saw I had a missed call from my management. I called them back and one of them was bathing their daughter and the other one was making dinner, but they dropped everything to give me the news. I just sort of let it sink in through Act Two, and it was special. It was really special.

Did you meet with Neff to prepare for the role?

Yes, absolutely. One of the first things I wanted to do was meet this woman, because I picked up on the fact that both Shonda in the script and Jessica in the writing of her article were really cued into her being a grounding force for the project, like a bedrock of a place to come home to and where truth lives.

I wanted to know what it was about her that brought people home and made her kind of a home base. We met right away and she was very generous with her time. We had about three and a half hours of dinner together in Bushwick. We found out we lived 20 minutes apart at the time.

She stayed really close throughout too. I was very blessed to have her trust. I think we built Neff together, the one you see on screen.

Was there an extra pressure at all to portray someone that is a living, breathing person? Or did it just add another layer to things?

It was both. There's that desire to honor the person, but Shonda was very generous with all of us in saying we're not trying to do carbon copies. We're trying to tell our own story. We're building our own world and we're using the details of this universe to bring it to life in our own way. She was very, very gracious about taking that pressure off.

But I built a friendship with Neff, so I just wanted to make sure that Neff felt at least celebratory of her qualities. I also just, I really love this woman. She really knows who she is. She's an artist herself. She was doing the New York City climb, doing that hustle, and I wanted to celebrate all of the ways that she was so successfully swimming upstream, but made it look like she was gliding on a surfboard. That's such a New York quality, and specific to her too. I really just felt like the gift was to get to honor this very real life.

What was it like working on your first Shonda Rhimes production? So many actors speak of her with such reverence.

I mean, that is like the Mecca, or it's like discovering the city of Atlantis or something. To be in her grace and her world, her multiverse even, is extraordinary. I've been following her since the jump. I read her book not too long ago before I got the script. She's one of the people on my vision board, and has been forever.

Seeing that come to life was incredibly affirming. Shonda actually said to me, she was at one of the first table reads, she sort of called me over very, very sweetly. She said, "I've had three gut feelings about actresses who are going to shine and make a splash, and the first is Katie Lowes, the second was Sandra Oh, and you are the third."

It really changed my life. She really basically said, "Welcome home, welcome in." Just to see that behind all of this power and this extraordinary storytelling is a woman and a team of people who love people, and they love stories and they love how complicated people and stories are. They're so unafraid of our darker sides, our purples, our blues, our bruises. That was just really cool to see that she really honors that, even in the people she chooses to work with. She really honors the fullness of humanity. It was just so saturated in every decision she makes.

In the original piece about Anna, Neff is this sort of grounding force, a home base as you said. What do you think Neff thinks about the situation, and Anna, by the end of it all?

I think Neff very astutely is engaged in the bigger picture question of, where does this come from? This idea that who we are is not enough to be powerful, to have power, to have worth. Why do we give that power to other people to make decisions about assigning it to people or not? Where does it come from, this idea that our exoskeleton speaks to the inner person? Why is it that when we walk into a room we are so used to almost spontaneously assigning worth and value, and even a narrative, to people we do not know based on what they look like?

Anna suffered from that kind of judgment as a young woman, as a woman with an accent that wasn't American, and Neff suffers from those same misjudgments and misunderstandings on a daily basis. I think that's where this kind of unshakable loyalty that we see lies. I think Neff is really clued into the humanity and the bigger human condition question of the show, and that Neff and Anna sort of help us examine.

It sounds like Neff has a real empathy for Anna.

There is, and I think Neff... there's an empathy and there's a seeing of herself in Anna. Just a woman who walks into a room and immediately, their first task is to defend themselves. That's a really complicated and heavy weight to carry. It's a specific posture and it's not everybody's experience, but Anna was one of the first people to say to Neff, I see you girl. You're an artist too. You love New York and you know New York.

That's one of the first times I think Neff experiences that kind of affirmation of this world that she's so studied, and is constantly offering keys to in terms of the guests, the hotel, but rarely has a chance to put the key in the lock herself and walk through the door. I don't think she ever forgets that moment. I think it's a real launching into a respectful business relationship, but then really a friendship.

As a cast, did you all talk much about the real Anna and how it all turned out for her?

I think we largely left that up to Julia [Garner]. She was the captain of our ship and, my goodness, is she extraordinary. She definitely stayed curious, but she found a really, I think respectful balance of being cued into what's going on with Anna as ways of informing her work. But also realizing that Shonda has built such a specific world to play in, and there's so much to unpack inside of every syllable of her writing that we could really just stay in our own world and feel safe to explore and interpret.

It was a unique balance that I think Julia found, and it was our guidepost as well to stay mostly close to each other.

Having now been part of this experience, what do you think is so compelling about these scammer stories?

I think it taps into what I think of as a universal experience of imposter syndrome, and feeling that in order to have power, worth and value in these bigger worlds, there's something about you, the human vulnerable part of you, that is inherently not good enough or is a detriment or a fault.

When we see these dramas that I think are actually very internal everyday stories played out on these extraordinary, extreme stages and circumstances, I think there's a seeing of ourselves in that.

There's also this element of time in all of these stories. It feels like this race. If I can just cross this finish line, then I'll be home free. If I could just get to the Fyre Festival, I'll win the game with that.

Or, if I can just sign the lease on 281 Park, it's over. And what that's like to feel, as Todd the lawyer says, so dangerously close. I think there's something about that. I will speak for myself, I feel sometimes like I put myself in a race that is totally fabricated. I already feel behind. I already feel too late. I already feel too much or not enough, and I'm catching up to this version of myself.

It's like I know I can be, but I'm not yet. I just think that's the part of these stories that feel, you know? It's the almost Shakespearean interpretation of a very personal drama.