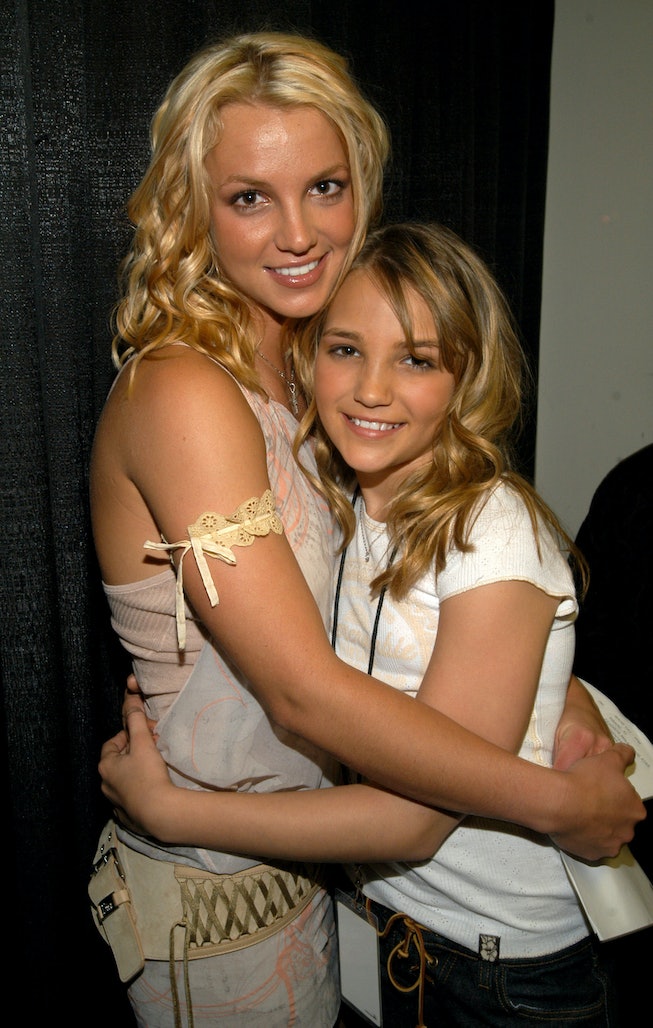 Britney Spears has responded to sister Jamie Lynn Spears’ appearance on Good Morning America and upcoming memoir, Things I Should Have Said.

In a scathing, multi-page statement posted online Thursday evening — in between paragraphs where Britney claimed she was suffering from a 104 degree fever and her security was refusing to purchase medication for her — Britney accused Jamie Lynn of using her story to sell her book.

“I see that my sister did her interview to promote her book... I watched it with a 104 [degree] fever lol and it was actually kind of nice having a fever so high cause I had to surrender to not caring,” she wrote.

Britney went on to address two points from Jamie Lynn’s interview that bothered her. The first being when during the interview Jamie Lynn characterized Britney’s behavior as out of control around the time the conservatorship was put in place.

“[Jamie Lynn] was never around me much 15 years ago at that time... so why are they even talking about that unless she wants to sell a book at my expense???” Britney wrote. (Notably, according to online fans who’ve acquired an early leaked version of Jamie Lynn’s book, the upcoming memoir mentions Britney over 200 times.)

Britney then stated that the second point of the interview that bothered her was when interviewer Juju Chang asked Jamie Lynn why Britney was upset about Jamie Lynn getting to perform remixes of Britney’s old songs.

“I know it may sound like a silly thing to most people,” Britney wrote, “but I wrote a lot of my songs and my sister was the baby. She never had to work for anything. Everything was always given to her !!! If you were me, you might understand asking 13 years for remixes to go into a small venue show and on tours !!!!”

Britney went on to describe the experience of watching Jamie Lynn perform the remixes as “seeing a 15 minute performance of everything I have ever wanted,” and added that, “yes, they did ruin my dreams.”

Britney wrote that when she eventually confronted her sister about why she agreed to perform her remixes when she knew that Britney wanted to change her show, Jamie Lynn reportedly told Britney: “Well, it wasn’t my idea.”

Later in her statement, Britney announced she would be taking a hiatus from posting on Instagram, and reiterated that her family “ruined my dreams 100 billion percent,” and that she is “disgusted” with them. “Hope your book does well, Jamie Lynn !!!!” Britney wrote.

Jamie Lynn has since responded to Britney with her own statement posted to Instagram. In it, the younger Spears wrote: “Quite frankly, the things that are being said are absolutely not the truth, and I have to clarify that, because now it’s getting harder for me to rationalize to my oldest daughter why our family continues to get death threats as a result of their aunt’s vague and accusatory posts, especially when we know she could tell the truth, and put an end to all of it in one second if she wanted to.”

Jamie Lynn additionally emphasized that her book “is not about [Britney],” and denied Britney’s claim that everything was handed to her. “I can’t help that I was born a Spears too, and that some of my experiences involve my sister,” she wrote. “I’ve worked hard since before I was even a teenager, and I’ve built my career in spite of just being someone’s little sister.”

She added that she doesn’t “want drama,” and is only “speaking my truth to heal my traumas.” Ending her statement, Jamie Lynn reiterated: “I will always love my big sister, and be here for her. It’s time to put an end to the unhealthy chaos that has controlled my life for so long.”

After months of silence, Jamie Lynn Spears is ready to talk. The actress — and younger sister of pop star Britney Spears — was interviewed by ABC’s Juju Chang to promote her new memoir Things I Should Have Said. Their emotional conversation aired this morning on Good Morning America, and will be shown again tonight on Nightline.

Yesterday, ABC released a clip of their conversation on Twitter. In it, a teary-eyed Jamie Lynn says, “I love my sister,” before Chang adds, “but things have gotten complicated.” The upcoming tell-all will be released on January 18th.

Per the synopsis, it’s an intimate look at Spears’ work and family life from her unfiltered perspective. Things I Should Have Said details her experience working on Zoey 101, along with her teen-pregnancy, an ATC accident that nearly took her daughter's life, and, of course, her relationship with her older sister.

During the interview, Jamie Lynn explained that she and Britney were very close growing up, and said her sister “felt like another momma.” In her book she wrote that Britney's temperament changed throughout the years, describing her as “erratic,” “paranoid,” and “spiraling.”

Though she declined to discuss her sister's current mental state in the interview, she did tell Chang, “I’m allowed to say how I felt in those [moments], because that matters. It matters that I was in pain.”

On November 12, Britney was finally released from her 13 year long conservatorship. The singer appeared in court to explain the rigid and unethical restrictions she was placed under, before the judge sided in her favor. According to Jamie Lynn, she was supportive of that decision.

“I was happy, I was,” she said of the conservatorship's end. Online many people have criticized her silence over the years. During the interview Jamie Lynn explained she was preoccupied by her first pregnancy. “When it was put into place I was 17 years old,” she said. “I was about to have a baby so I didn’t understand what was happening. Nor was I focused on that. I was focused on the fact that I was a 17-year-old about to have a baby. I understand just as little about it then as I do now.”

The actress then clarified she was not in charge of Britney’s estate during her conservatorship, and supported her decision to end it. “So when she needed help, I set up ways to do so,” she said, adding that she went out of her way to send the contacts of people who could assist.

Despite her claims, Britney has criticized her family's actions numerous times — and specifically the actions of her little sister. She most recently posted a photo of a typewriter — possibly in response to her sister's upcoming book — and wrote, “Shall I start from THE BEGINNING.”