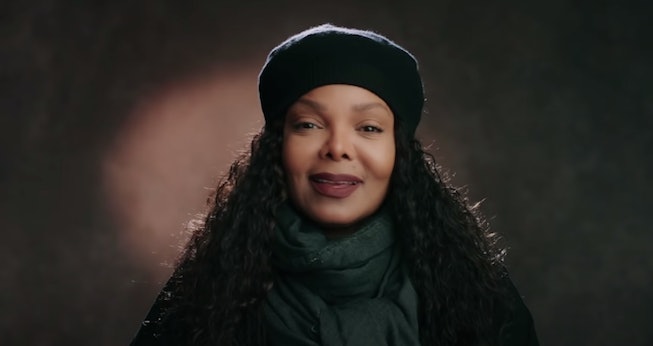 Janet Jackson is finally ready to tell her story. In a two-part documentary created with Lifetime and A&E titled Janet, the pop icon will reveal details of her career, family life, and of course, the 2004 Super Bowl incident that was recently explored in a New York Times investigation that Jackson did not participate in. Premiering later this month, Janet is a full exploration of the youngest Jackson’s rise to astronomical fame.

Here’s everything we know about Janet so far:

“Who is Janet Jackson?” the film's first trailer asks. “Janet Jackson is many, many, women,” Whoopi Goldberg says. “She’s an empowered woman,” Mariah Carey follows. Tyler Perry, Ciara, AND Regina King, all contribute their definitions before Samuel Jackson says Janet is, “the greatest show-woman of all time.” With countless awards, number one hits, and iconic performances under her belt, his declaration may be the most accurate.

However, as the trailer notes, the singer is also, above all else, very private. The upcoming documentary is her first time opening up to the public, amidst years of probing and speculation. “It’s just something that needs to be done,” she says in the trailer.

Janet will delve into the youngest Jackson sibling’s family background, including her relationship with brother Michael Jackson.

Janet provides exclusive footage of Jackson and her brothers as they transitioned from ordinary children to global superstars. The film claims their father “gave up his fatherhood” to hone his children’s musical talents. While her brothers formed The Jackson Five — which launched the solo careers of Michael, Tito, and Randy Jackson — Janet was pushed to pursue a solo career.

“There were times when I just didn’t understand where I actually fit in,” she says. “My father was very strict,” she continues, “he was in charge of my life, my career...my father said you’re going to sing.” At just 16 years old she released her debut album, Janet Jackson, then continued making music for another twenty years. By the late nineties, she’d become a household name and pop-icon.

Janet will also explore the lows of her career, from criticism of her sexuality, romantic relationships and family to the infamous 2004 Super Bowl incident.

However, like many other stars of her time, Janet’s meteoric rise came with an intense downfall. “They build you up and once you get there, they’re so quick to tear you down,” she shares. Along with her accomplishments, Janet explores many controversies as well. Viewers can expect to learn more about Janets relationship with Michael — and how his child abuse allegations affected her career — along with her hyper-sexualized image, romantic relationships, and a myriad of other topics.

“Justin is in it. I was told he is going to be in the documentary. It’s like this big secret. He’s the surprise, just like the Super Bowl,” the source told Page Six.

Though the “wardrobe malfunction” in which Jackson’s pasty-covered breast was exposed on live TV happened 18 years ago, its implications are still felt by Jackson today. The incident also impacted Jackson and Timberlake’s careers very differently, with Jackson ultimately being demonized by the media for what happened.

Part one of Janet drops on Friday, January 28th, and will be available to watch on both Lifetime and A&E at 8pm ET.

If you don’t have cable, Philo and SlingTV offer free trial periods and include access to Lifetime and A&E.

Janet may end up on a streaming platform, too.

Though not yet confirmed, the likely streaming home of Janet will be Hulu.