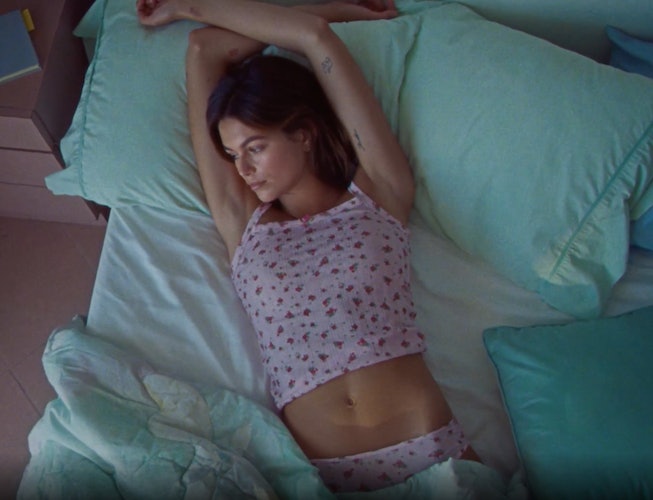 If you thought Kaia Gerber’s recent appearances in American Horror Story — and in its spinoff, American Horror Stories — were merely one-offs in between her packed schedule opening and closing the biggest fashion shows on the calendar, think again: the supermodel has no intentions to stop taking Hollywood by storm. Up next? A starring role in Carissa Gallo’s upcoming short film Palisades.

While very little is known about the upcoming effort — including when it’s coming out (supposedly “soon”) — a new trailer offers some hints about what to expect. “It can be hard to find a friend you can really trust,” Gerber’s voice can be heard saying at the beginning of the clip. “Girls can be so mean.”

According to a brief description on the film’s website, Palisades is “an exploration into the subtleties of female friendship” — a claim that is certainly reflected through Gerber’s opening line. It continues as the supermodel-cum-actress says, “I always felt like other girls were acting a certain way to make someone like them. But then I was always left wondering: what are they really like?”

The upcoming film will serve as a reunion for direct Carissa Gallo and star Kaia Gerber. The pair previously worked together several years ago on “Last Day of Summer,” a two-minute video that accompanied the model’s cover for Teen Vogue’s Icons issue. Several features from that video — the use of voiceover, its deliberately sunny settings, the bubbly pastel color palette — seem to have been carried over to Palisades.

But in Palisades, those same things appear to take on a slightly creepier affect. The trailer’s images of girls dancing, laughing, staring, and drunkenly tossing around their empty wine glasses have a decidedly sinister undertone, especially with Gerber delivering such bon mots as, “I just never really had that many friends.”

In addition to Gerber, Palisades also stars The Morning Show’s Taylor Cooper and Violet’s Esther-Rose McGregor (who, yes, is the daughter of recent Emmy winner Ewan McGregor). The short is expected to be released soon.

Check out the trailer below: