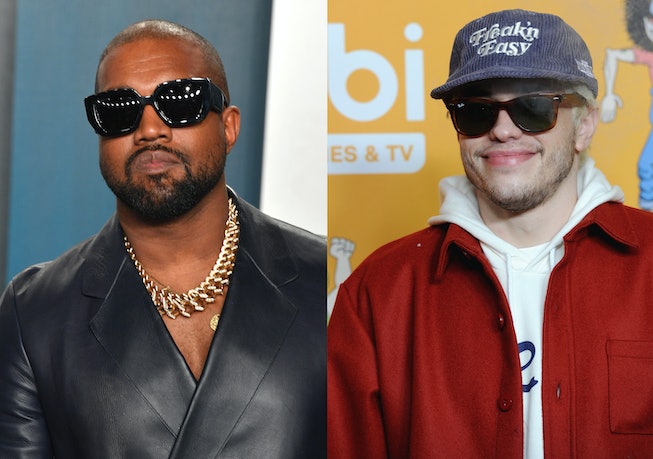 There’s nothing like a celebrity love triangle to fill the tabloids with content — and in the wee hours of 2022, a full on quadrangle has kept the public in rapt attention, as estranged spouses Kim Kardashian and Ye (formerly known as Kanye West) have both embarked on relationships with younger, New York City natives Pete Davidson and Julia Fox.

Amidst the endless speculation about what it all means, from Davidson and Fox’s past photoshoot together, to whether Ye is just trying to make Kim jealous, to the real question of whether the whole situation is a piece of performance art being sponsored by Balenciaga, there’s also new Ye music on the way.

In a new, grainy leak of West’s new track with The Game called “Eazy,” Ye takes a jab at Davidson, rapping, “God saved me from the crash, just so I can beat Pete Davidson’s ass.”

Ye famously survived a near fatal car crash that resulted in his jaw being wired shut, the subject of one of his early hits, “Through The Wire.”

The track will reportedly drop Friday night at 9pm PT, so there’s still time for Ye to remove the line, but it shows how he may really feel about the whole situation. Ye was still publicly trying to get Kardashian back when she started a whirlwind romance with the self-proclaimed king of Staten Island.

He then started dating Uncut Gems star, artist and downtown darling Julia Fox, with Fox writing a gushing review of her second date with Ye for Interview Magazine. The pair were seen hanging out with Madonna, The Game and Antonio Brown recently, with Madonna hinting that Fox may be in her upcoming biopic.