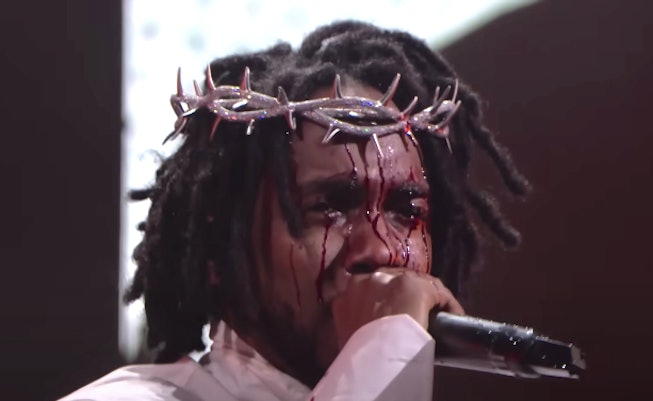 On Friday, June 24th, 50 years of federal reproductive rights protections ended as Roe V. Wade was overturned. The Supreme Court decided that abortions are not protected by the constitution, and will allow each state to determine if they will allow them or not. Up to 26 states are expected to restrict abortion care — many have outlawed it already without any exceptions for assault, incest, or preserving the life of the mother in an unviable pregnancy, and other states are predicted to do the same.

The Supreme Court’s decision coincided with the annual Glastonbury Music Festival in the UK, where many artists protested the end of Roe V. Wade with explicit call outs to the Supreme Court. From Olivia Rodrigo bringing out Lily Allen for a pointed rendition of “F*ck You,” to Billie Eilish dedicating her song “Your Power” to the moment, keep reading to see how artists addressed the historical slashing of women’s rights:

The Mr. Morale & The Big Steppers rapper ended his set with a grim statement about the future of Roe V. Wade in America. While wearing a crown embellished with thorns, he chanted “They judge you, they judge Christ / Godspeed for women’s rights,” as fake blood dripped down his face.

Megan Thee Stallion discussed the end of Roe V. Wade on stage as well. “I mean godd*mn what else you want,” she said. “Texas really embarrassing me right now, ya’ll know that’s my home state. And I want it on the record that the mother f*cking hot girls and hot boys do not support this bullsh*t that ya’ll are campaigning for.” Then she encouraged the crowd to chant, “My body, my motherf*ckin choice.”

Before singing her Happier Than Ever track, “Your Power,” the singer took a moment to address the news and how it relates to her song. “It’s about the concept of power, and how we need to always remember not to abuse it. And today is a really dark day for women in the US and I’m just gonna say that ‘cause I can’t bear to think about it any longer in this moment,” she said.

During her performance, Bridgers encouraged fans to chant “F*ck the Supreme Court.”

“F*uck that shit,” she said. “F*uck America and all these irrelevant old motherf*ckers trying to tell us what to do with our f*cking bodies. F*uck it.”

Joe Talbot, the lead singer of the British rock band, Idels, addressed the crowd right after the Supreme Court’s ruling was released. Before signing the song “Mother” he said, “This is for every mother and every woman and her right to choose. Long live the open-minded. Long live my mother and long live every single one of you.”

Olivia Rodrigo brought Lily Allen on stage and dedicated the song “F*ck You” to the Supreme Court. “I’m devastated and terrified that so many women and so many girls are going to die because of this,” Rodrigo said. “I want to dedicate this next song to the five members of the Supreme Court who have showed us that at the end of the day, they don’t truly give a sh*t about freedom. This song goes out to the justices Samuel Alito, Clarence Thomas, Neil Gorsuch, Amy Coney Barrett, and Brett Kavanaugh. We hate you.”

Before singing “Secrets From A Girl,” Lorde shared a message about perseverance with her fans. “Wanna hear a secret girls?” she said. “Your bodies were destined to be controlled and objectified since you were born. That horror is your birthright. But here’s another secret. You possess strength. That wisdom is also your birthright. I ask you today to make exercising that wisdom your life’s work because everything depends on it. F*ck the Supreme Court.”

NEXT UP
Culture
Senators Quoted Taylor Swift During Ticketmaster’s Hearing
Entertainment
Harry Styles' "As It Was" Grammy Performance Featured A Silver Tinsel Onesie
Entertainment
Beyoncé Is Now The Most Awarded Artist In Grammy History
Entertainment
Taylor Swift Sparkled In Midnight Blue On The 2023 Grammys Red Carpet
Style + Culture, delivered straight to your inbox.