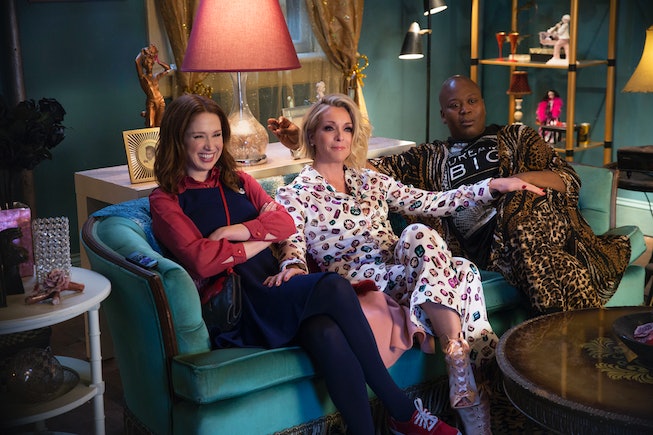 This piece contains spoilers for the Unbreakable Kimmy Schmidt special, "Kimmy Vs. The Reverend."

Reviews for Black Mirror: Bandersnatch, Netflix’s first high-profile foray into “interactive” choose-your-own-adventure-style storytelling, were decidedly mixed, but I found myself firmly on the side of unimpressed. On paper, the idea of our world’s premier show about the dangers of technology taking on a new form of technology made perfect sense. But when all was said and done, Bandersnatch just didn’t work. At its best, Black Mirror asked big, compelling questions about how our overreliance on tech could eventually be our undoing. Even at its worst, it was still interesting. (Though Miley Cyrus’s “Rachel, Jack and Ashley Too” episode paled in comparison to its predecessors, it did, at the very least, give us a pop anthem that’s still played in gay clubs to this day.) Bandersnatch, on the other hand, committed the cardinal sin: it was boring. In an attempt to set up divergent storylines that would make the interactive format work, Black Mirror creator Charlie Brooker sacrificed compelling narrative. No longer was the show trying to ask big questions. Now, it just wanted you, the viewer, to answer smaller ones — questions like, “What do you want for breakfast: Sugar Puffs or Frosties?”

So naturally, I went into the new interactive Unbreakable Kimmy Schmidt special with a lot of trepidation. During its five-year run, the Tina Fey series about a woman who escapes after being trapped in an underground bunker with a deranged reverend for 15 years, was consistently one of the funniest sitcoms on television. It was bright and joyful, a hangout comedy with some of the zaniest characters in recent memory. The titular Kimmy (Ellie Kemper) was worryingly optimistic; her roommate-cum-best friend Titus Andromedon (Tituss Burgess) was deliciously diva-ish; her landlord Lillian Kaushtupper (Carol Kane) was inexplicably crazed; and her one-time employer Jacqueline White (Jane Krakowski) was addictingly self-centered. The show was a constant delight, and when it ended in January 2019, my disappointment about its conclusion was overshadowed by my elation that it had somehow managed to stick the landing. The news of its special reunion episode was exciting, but finding out that it would be interactive was nerve-wracking. Just as Bandersnatch ultimately ruined some of the goodwill I previously harbored for the Black Mirror franchise, I feared that this special could make me reevaluate everything I loved about this sitcom from the beginning.

As it turns out, the interactive format works far better for a low-stakes sitcom than it does for big idea-wielding dramas. For one, there is no need to trade off between adventure and narrative. While Black Mirror’s strengths lie in its deep exploration of the terrifying possibilities of tech, a sitcom (particularly one like Kimmy Schmidt) succeeds primarily on the strengths of its jokes. Luckily, even with the addition of multiple paths, Kimmy vs. The Reverend is mostly still a joke factory, offering a seemingly endless supply of puns and punchlines, each one funnier than the last.

The special jumps forward in time a bit, following Kimmy as she prepares for her marriage to Frederick, a somewhat daft prince played with gleeful abandon by Harry Potter’s Daniel Radcliffe. The couple seem positively in love, but when Kimmy discovers a mysterious book hidden inside Jan (the backpack she’s had since she was in the bunker), she becomes preoccupied with the idea that it provides proof that her kidnapper, Reverend Richard Wayne Gary Wayne (Jon Hamm, in what continues to be his most enchantingly ridiculous role), has another bunker where he’s been hiding other girls. A quick visit to The Reverend’s jail cell gives Kimmy the confirmation she needs: There are other kidnapped girls out there. Before long, she’s taken off on a cross-country quest to find and free them before The Reverend gets to them first.

It’s this quest that makes up the bulk of the episode, and it’s one that lends itself quite easily to the episode’s interactive nature. Everything is still funny, laden with jokes so specific you couldn’t imagine them anywhere else. (“These might as well be a clown in a sewer because they are it,” Titus says while trying on a pair of obscenely gaudy sunglasses.) Like the very best episodes of the series, we follow Kimmy on an adventure that lands her in some very interesting spots — a barren gas station here, a bar full of menacing white conservatives there — while occasionally checking in on the equally absurd antics of other characters, such as a short segment that finds Frederick and Lillian accompanying each other in a Mary Poppins-inspired musical number. It’s a fun ride, and the interactive elements work by being playfully self-referential: After I took Kimmy through all three versions of killing The Reverend (“shoot,” “stomp,” and “splode”), he finally lands in hell where he taunts me for being evil enough to kill him in three different ways before ever considering the “Spare Him” option.

But the show isn’t perfect, either. While it can be fun to feel like you’re in the driver’s seat, it can also be frustrating, particularly when it becomes clear that some of these “options” don’t actually reveal new storylines at all. Instead, many of them feel like they were included merely as an excuse for the writers to flex their skill at creating increasingly obscene endings. Early on, you’re asked to decide between making your journey with Titus or Jacqueline, and while I immediately jumped at the chance to travel alongside Titus during my first round, I was disappointed to find on a subsequent trial that opting for Jacqueline didn’t result in a new story of hijinks and shenanigans, but rather jumped to the tragic death of both Kimmy and Jacqueline when the latter decides to travel in a private jet piloted by her unlicensed son. In these dead-end moments — which are sprinkled all throughout — the special reminds me of the “you’re an assistant” threads that have become popular on Twitter in the past year.

Sometimes, you’re forced to sit through the same scene, over and over again, before you choose the “right” answer — a feature that can quickly grow monotonous. In these instances, the only thing keeping the narrative fresh is, again, the show’s bottomless stockpile of jokes, making even the craziest scenes bearable to watch three times in a row. The separate paths may not lead to real storylines, but at least each new scenario offers a different set of laugh-out-loud punchlines.

And therein lies the central conundrum of these interactive specials. While Kimmy vs. The Reverend is eons better than Bandersnatch, it doesn’t fully make a case for the usefulness of this format at all — save for its ability to let comedy writers put all their quirky jokes to use rather than settling on “the best one” while leaving all the other (surely still great) ones on the cutting room floor. Nevertheless, even with these flaws, the special is a worthwhile addition to the Unbreakable Kimmy Schmidt canon — and with its fairytale wedding ending, it works especially well as a final goodbye to this beloved group of kooky characters. I don’t think I’ve ever laughed harder than I did during the episode’s final minutes, when the camera pans over to the man from the show’s title sequence, who, shedding a tear, simply says, “That was a fascinating transition.” Like the best punchlines, it came as a complete surprise, wrapping the series up with a long-running joke that extended from its first moment to its very last — the perfect stamp on a (thankfully, still) perfect show.