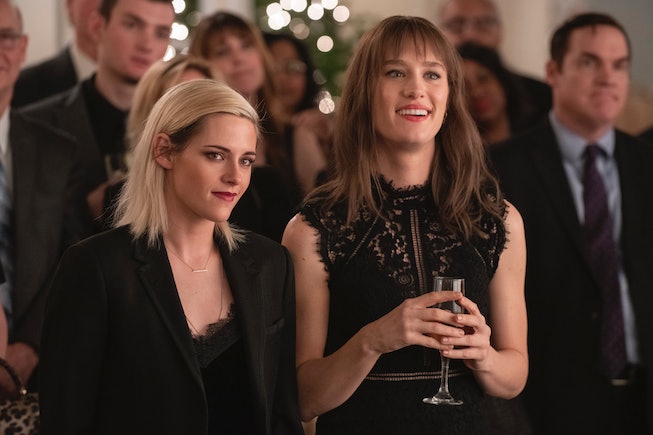 If it seems like only yesterday that we were trying to figure out the best way to get into a movie theater to see Kristen Stewart's upcoming lesbian holiday rom-com Happiest Season, that's because, well, it was. Originally slated to hit theaters nationwide this Thanksgiving weekend, the film's future was always up in the air, given the ongoing impact the COVID-19 pandemic has had on movie theaters. (I still haven't seen Tenet for this very reason.) But luckily, there is no reason for us to fear any longer, for Happiest Season is now bypassing a theatrical release entirely and instead will premiere in the U.S. on Hulu. (It will keep its original release date.)

If you haven't heard, Happiest Season stars Kristen Stewart and Halt and Catch Fire's Mackenzie Davis as Abby and Harper, a happy couple. As the pair prepare to travel to Harper's home for her family's annual Christmas dinner, Abby gets ready to propose to her girlfriend. But once there, Abby discovers that, despite their loving relationship back at home, Harper isn't even out of the closet to her very conservative parents. Directed by Veep's Clea Duvall based on a script she wrote alongside Mary Holland (another Veep alum, who also stars in the film), Happiest Season is being marketed as a classic holiday rom-com, except with two women at its center. Last month, Stewart told People, "I think I've wished to see a gay Christmas rom-com my whole life. I'm so happy and proud of Clea for bringing this into the world."

The film was originally slated to release in theaters nationwide on November 25th, but as a result of movie theater closures (few are open in New York or California, the biggest moviegoing capitals in the country), Sony Pictures sold U.S. rights to the film to Hulu, who will now release it as a Hulu Original. In a statement, TriStar Pictures President Nicole Brown said, “This holiday season — more than any other — we could all use a little happiness. It was essential to Sony Pictures and to the filmmakers that Clea’s marvelous and fresh holiday-themed romantic comedy come out when the lights are on the trees. We are excited that Hulu is geared up to make this happen in the U.S. and grateful that they love the movie as much as we do.”

The first trailer is coming "before you know it." But in the meantime, check out Hulu's tweet below.

Happiest Season will premiere on Hulu this November 25th.

NEXT UP
Culture
Succession Season 4 Trailer Explodes With Family Drama
Culture
The Madonna Biopic Is Being Scrapped
Culture
Kaia Gerber Won’t Stop Until She’s Cast As Patti Smith In A Biopic
Culture
The 2023 Oscar Nominations Full List Is Here
Style + Culture, delivered straight to your inbox.