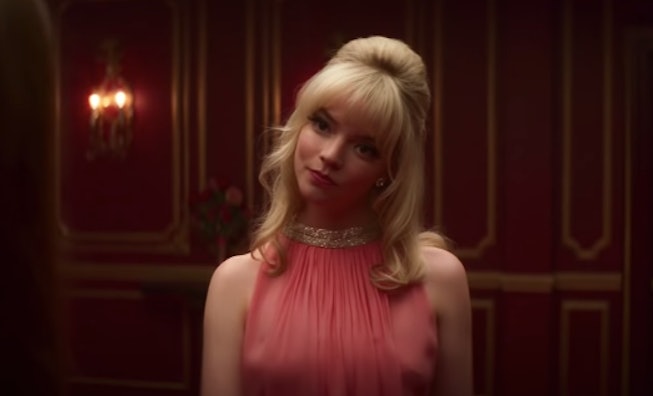 If you didn’t know the name Anya Taylor-Joy before last year, chances are you’ve since met her through Netflix’s breakout, Golden Globe and SAG Award-winning miniseries The Queen’s Gambit. But the Miami-born, Argentina-raised actress had a career before that, where she was best known as a horror/thriller star thanks to her phenomenal performances in the back-to-back cult classics The Witch and Thoroughbreds. Now, after ascending to the highest tier of A-List Hollywood through her dramatic work, Taylor-Joy is returning to her roots in Edgar Wright’s upcoming fashion horror Last Night In Soho, which just released its third trailer.

Written by Baby Driver’s Edgar Wright and 1917’s Krysty Wilson-Cairns, Last Night In Soho is a story about “a young girl, passionate in fashion design, who is mysteriously able to enter the 1960s, where she encounters her idol, a dazzling wannabe singer.” But as is the case in any film described as a psychological thriller, the young girl soon discovers that “1960s London is not what it appears, and time seems to fall apart with shady consequences…”

Leave No Trace and Jojo Rabbit breakout Thomasin McKenzie stars in Last Night In Soho as Eloise, the fashion-obsessed aspiring designer who finds herself traversing through 1960s London. Taylor-Joy stars opposite McKenzie as Sandy, the singer who may be more than what meets the eye.

According to the trailer, McKenzie’s Eloise and Taylor-Joy’s Sandy have a creepy, almost tethered-like relationship in the film. After arriving in 1960s London, Eloise appears to do her best to immerse herself in the culture of her new adopted home — walking through brightly lit streets where Sean Connery’s classic Thunderball is being heavily advertised at the local theater — until she begins to see someone else’s reflection in the mirror: that of Sandy. But rather than be afraid, the presence of Sandy seems to intrigue and excite Eloise. Soon, she’s using Sandy as the muse for her design illustrations while their tethered-like experiences grow increasingly more intense. (When you start seeing the hickies someone else is getting, it might be a cause for concern.)

Last Night In Soho hits theaters October 22. Check out the first trailer below. But be warned: “When the past lets you in, the truth will come out.”