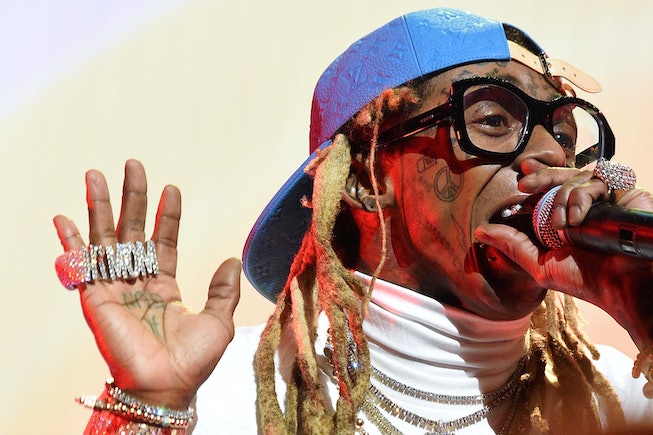 As quarantine continues to roll on, more and more celebrities, now desperate for any kind of distraction from the mundanities of everyday life, are hopping on the broadcast wave. Whether they are hosting daily Instagram Live sessions on "how to stay lit in dark times" like Miley Cyrus, chatting with strangers like Justin Bieber, or simply making homemade music videos for their latest singles like Kehlani and Troye Sivan, it's clear that our government-mandated isolation hasn't prevented celebrities' desires to communicate with the outside world. The latest A-Lister to join in on the trend is none other than the legendary Lil Wayne. This Friday evening, the New Orleans rap legend will premiere his new radio show with Apple Music, titled, of course, "Young Money Radio with Lil Wayne."

Described in a press release as "the first artist hosted show on Apple Music to broadcast live via video stream," Young Money Radio will find Tha Carter taking on a new role as radio host, adding yet another skill to his long resume. According to early details, "each episode will feature exclusive DJ mixes and guest appearances from some of the biggest names in music, sports, and comedy." Furthermore, based on a tweet posted to Wayne's account last night, the first few minutes of each episode will be broadcast in-person via the rapper's Instagram Live before jumping over to Apple Music for the remainder.

While there is no word yet on who we can expect to hear from in its debut episode, it's safe to assume that Wayne has tapped some of his closest Young Money family members to kick things off with a big bang. Who knows? Maybe Nicki Minaj will even show up. I certainly wouldn't object to a Young Money x Queen Radio crossover.

Take a look at Lil Wayne's tweet about Young Money Radio below.

Young Money Radio will premiere live this Friday, April 24th, at 7:00pm EST. To listen, be sure to tune in here.

NEXT UP
Entertainment
SZA May Finally Be Returning With New Music
Entertainment
Björk's Music Video Evolution, From Fresh-Faced Star To Avant-Garde Master
Entertainment
Lizzo Announced UK & European Dates For The Special Tour
Entertainment
Paramore's "This Is Why" & 9 Other New Songs Out This Week