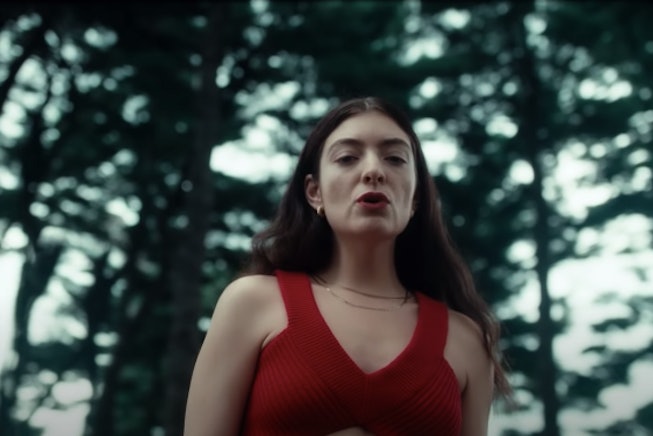 Lorde’s full of surprises this summer. After a four year hiatus, she returned to the music scene with her sun-drenched third album, Solar Power. Then, she gave fans an inside look at her life with a refreshingly honest newsletter, and revived her important onion ring reviews. And now she’s unveiled herself again, this time, as a Britney Spears fan.

As Vogue’s October cover star, Lorde recreated a melancholy version of Spears' 2007 Blackout track “Break The Ice.” The music video for the cover, directed by Alfred Marroquín, gives the club anthem Lorde’s signature alt-girl twist with its stripped-down aesthetic. She even blended the song with her Solar Power track, “Fallen Fruit.”

Clad in a red two-piece set (that Vogue suspects is a nod to Spear’s iconic “Oops I Did It Again” outfit), Lorde stands in the middle of a forest — the Bronx’s Botanical Gardens — gazing at the scene around her before she begins singing. When she does, the camera follows her, spinning around the singer and zooming into her stone-cold gaze as she recites the lyrics.

It seems like another glimpse at who Lorde is, not only as a performer, but as a person. In her interview with Vogue, she claims to be an unfit celebrity. “I’m great at my job, but I’m not sure I’m the man for the job,” she says. “I’m a highly sensitive person. I’m not built for the pop-star life.”

Even so, Lorde admits she’s able to turn it on when she likes. She can go from singing heart-breaking ballads — like those in her critically acclaimed album Melodrama — to not performing at all, and then returning to the mic with a completely different sound. It all depends on what she wants us to see and when. And with each decision, she proves that she’s the one in control.

Photographer Ophelia Mikkelson said of Lorde, “She’s shy and a reserved woman, but she has this incredible intelligence.” Like Spears when she originally released “Break The Ice,” Lorde’s proving that she’s full of multitudes. And perhaps, a better, or more secure, celebrity than she believes.

The camera zeroes in on Lorde as she sings, “let me break the ice / allow me to get you right / baby I can make you feel.” It’s a welcome, albeit stark, contrast to her warmer performances this year. And as the cover fades out, she transitions to “Fallen Fruit,” a song about protecting the planet.

Lorde spends the rest of her time looking down at the camera, commanding the audience’s attention. And while she may be shy and uninterested in the conveyer-belt output of the music industry, her latest performance makes one thing clear. When Lorde has something to say, she’ll say it. And when she does, you’ll want to listen.

Watch her full performance below: