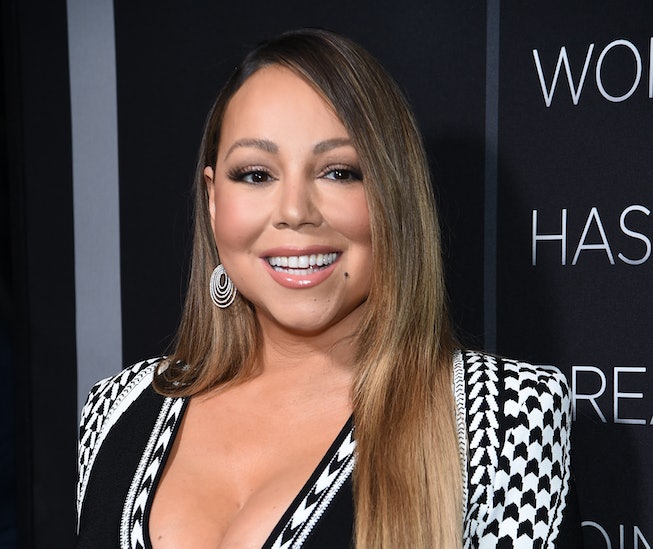 If you, like me, were already blown away by the prospect of Mariah Carey teaming up with Lauryn Hill (even if via sample) to record "Save the Day" — courtesy of her upcoming Rarities project — then I'm sure you aren't ready for the most recent news about her musical exploits. According to new reports, the recent Songwriters Hall of Fame inductee was involved in the recording of an alt-rock album in the 90s.

The album in question? Chick's Someone's Ugly Daughter, which is not available on streaming but can be heard (in album sampler format) here. In a statement given to Pitchfork, a representative for Mariah Carey has confirmed that the singer wrote, produced, and sang background vocals on every song from the album, in addition to art directing the album packaging and directing the music video for "Malibu."

The initial revelation comes from the singer's highly-anticipated memoir, The Meaning of Mariah Carey, which is out tomorrow and has already received some highly favorable reviews. As part of her promo for the Michaela Angela Davis co-penned release, Carey took to Twitter to share an excerpt from the "Fantasy" chapter of the book. "Fun fact: I did an alternative album while I was making Daydream," the singer noted in a tweet. "Just for laughs, but it got me through some dark days. Here's a little of what I wrote about it in #TheMeaningOfMariahCarey. S/O to my friend Clarissa who performs the lead w/ [vocals by] me as a hidden layer."

The accompany tweet features a moving illustration of the book excerpt while a snippet from "Hermit" (the ninth song out of 11 on Someone's Ugly Daughter) plays over it. Reading Carey's words about what drew her to this style of music — its associations with unbridled freedom and carefree reverie, primarily — it's clear that the singer was probably a secret fan of unapologetic women like Hole's Courtney Love and Garbage's Shirley Manson, and was frustrated that she couldn't let loose like they could, given her race and chosen career path.

Luckily, she could live vicariously through the women of Chick. And weren't they lucky to have her?

Read the excerpt from The Meaning of Mariah Carey here:

"I'd bring my little alt-rock song to the band and hum a silly guitar riff. They would pick it up and we would record it immediately. It was irreverent, raw, and urgent, and the band got into it. I actually started to love some of the songs. I would fully commit to my character. I was playing with the style of the breezy-grunge, punk-light white female singers who were popular at the time. You know the ones who seemed to be so carefree with their feelings and their image. They could be angry, angsty, and messy, with old shoes, wrinkled slips, and unruly eyebrows, while every move I made was so calculated and manicured. I wanted to break free, let loose, and express my misery — but I also wanted to laugh. I totally looked forward to doing my alter-ego band sessions after Daydream each night."

And check out Mariah Carey's tweet to hear a snippet of Chick's "Hermit" below.