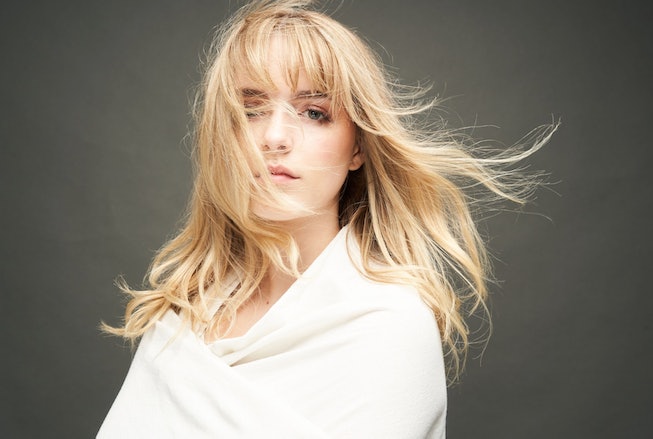 As reviews for the rebooted Ghostbusters: Afterlife roll in, much buzz has surrounded its new and dynamic young cast, charmingly fronted by 15-year-old McKenna Grace. The actress — who’s appeared in The Handmaid’s Tale and Young Sheldon— plays Phoebe, the bespectacled and precocious (and slightly socially awkward) tween granddaughter of original Ghostbuster Egon Spangler, who alongside her brother Trevor (Finn Wolfhard) and a ragtag team of other townies rediscovers the supernatural legacy her grandfather left behind.

The role is a major breakout moment for Grace who, alongside her co-stars, carries the film to its dramatic conclusion in more ways than one: her first-ever song — the fittingly titled “Haunted House” — ushers in the film’s end credits. Out now with a music video you can watch below, the track is a dreamy pop song that bursts outward on the chorus after a precipitous beat drop, a tactic that Grace uses to surprising and addictive effect. Its paranormal theme, though a coincidence as it relates to Ghostbusters, relegates former exes as specters that haunt a home: “A ghost never leaves a haunted house,” she sings on its hook.

It’s a promising beginning for Grace, who wrote the song while at home in lockdown after feeling stir crazy from being cooped up all day. “I found a very therapeutic, creative outlet through music because during that time [...] a lot happened in my personal life with people that I know,” she told NYLON over a recent video call. “It was a way for me to deal with all of that and turn it into music.”

Though acting remains her first focus — a script she co-wrote during lockdown for The Bad Seed sequel has just been greenlit — Grace is still planting the seeds of her music. “I have 113 notes of song ideas,” she says.

Below, read on for NYLON’s conversation with Grace as she talks Ghostbusters, the influence Billie Eilish has on her music, songwriting, and more.

Tell me about the journey to writing “Haunted House.”

It was kind of just about a lot of personal stuff that I went through over [lockdown] because I feel like everyone had something weird or crazy going on during that time. Everybody was really depressed and sad and just trapped in a space. The song's about whenever you stop talking to someone you're not friends with anymore, you don't talk to that family member, you broke up with your boyfriend or girlfriend. It's like their memory still kind of lingers: “a ghost never really leaves a haunted house.” Metaphors. For me, it's kind of a breakup song, but it's also about family.

Have you always wanted to write music, or how did you decide to try your hand at songwriting?

I've been writing for my whole life kind of on and off, and that's kind of whenever music started becoming important to me, but it's funny because I think that I can pinpoint an exact moment when music really did become something I genuinely am super passionate about.

What was that moment?

I went through a really rough three months and it was kind of the worst my mental health's ever been. I listened to “Happier Than Ever” every single day for about a month, and I swear that song helped me get through that time. That was really special to me that a song could help me that much through a time like that, and I was like, I want to be able to do something like this. I want to be able to help people, you know? That's whenever I really started listening to music hardcore every day, I have a playlist that I listen to in the morning. I have a playlist I listen to at night. I love listening to music whenever I'm getting ready for premieres and stuff. I always have different songs playing for how I'm feeling. I love music now. It's really important to me, and I can't imagine my life without it.

Is Billie Eilish an artist you get a lot of inspiration from?

You know, I watched her documentary and I have so much respect for her. I think that she's absolutely brilliant, her and her brother and her family. Yeah. I definitely love her. It's funny. I listened to her, but I didn't listen to her a ton. But then I started hearing this song on TikTok and it went, "You made me hate this city." And I was like "What song is that? That's like, huh. I keep on hearing this all over my For You Page. What is this song?" And then people in the comments were like, oh, it's Billie Eilish. And I was like, "No, that's not." And I'm in love with that song. I have a lot of songs of hers on most of my playlists.

“Haunted House” is in the credits of Ghostbusters: Afterlife. What was it like hearing your song at the end of the movie?

It's really weird. It's so funny because there's two secret hidden scenes in the credits and to get to the other one, everybody has to sit through my songs. So, let's go everybody! All these people who wouldn't usually listen to my song have to go and sit and listen to it. I'm like, yes, this is great for me.

Were you a fan of the Ghostbusters franchise when you auditioned for the part?

It was actually really cool because yesterday, for the premiere, I got to bring my friend who I've known for 12 years and her and I, that was our thing. Whenever we were little, we would sit and we'd go watch Ghostbusters. And we had Ghostbusters t-shirts that we'd wear. Our moms would go and buy extra large men's shirts that had Ghostbusters on them and they'd turn them into dresses for us. And we used to have Ghostbusters stuffed animals. It's really, really weird.

What was it like filming with the original Ghostbusters crew on set?

It's crazy, really. I was crying a lot on set all the time, just seeing the car and then like the OGs show up and you're like, what do I even say? How do I even react? I want to talk to them like they're regular people, but at the same time, they're like these legends that I've been watching my whole life. So it's very intimidating but not in a bad way.

Are you a believer in ghosts?

I wouldn't say that I'm so much superstitious versus paranoid and anxious, but I very much believe in the afterlife and I believe that we go somewhere and believe in God and everything, but I think I do believe in ghosts. I say it like I'm skeptical because I feel like I'm trying to be logical until something spooky happens to me, because spooky things happen to me. And then I sit there and I'm like, "I wholeheartedly believe in ghosts right now."

As you’re juggling your acting career and making music, what are you learning about that balancing act? I'm sure it's difficult given how busy you are now.

I was meeting with people and someone was like, "You're not going to make it. You have to pick one or the other, you can't just move into music after acting, you have to be a musician or an actress." It's harsh. I feel like if somebody tells me, “You're not going to be able to do that, that's too hard for you,” that immediately makes me [think], "Oh, I'm going to do it. Just to spite you. I'm going to go and do it now." I'm trying my best. There's not much for me to say that I've learned because I've learned a ton, but it is weird moving into music because it's so different from acting and I've kind of figured out acting right now from trial and error and all the mistakes that I've made. So, I mean, let's hope I can figure out music soon. I'm happy to have people around me that aren't sneaky or trying to do anything weird. All the people that I have are genuine, so I'm very lucky.