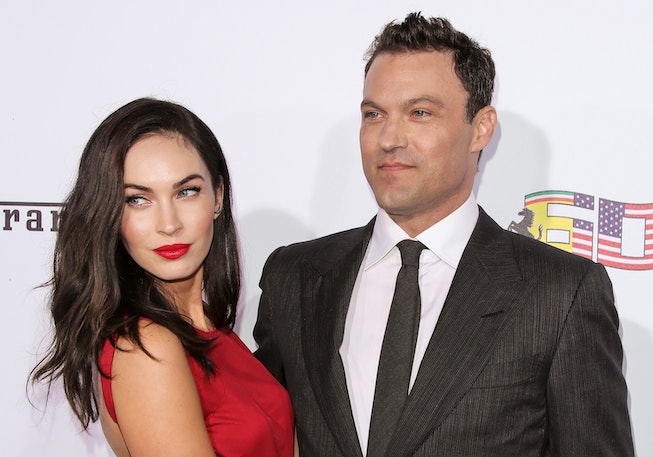 After ten years of marriage and another five of dating, Megan Fox and Brian Austin Green are calling it quits. The split comes four years after Fox notoriously filed for divorce in 2015, only to reconcile with her beau and dismiss the case four years later. But now, the Hollywood actor couple (her of Jennifer's Body fame, he of Beverly Hills 90210) are seemingly ready to part for good. Rumors have been swelling for a while, as both parties have been seen without their wedding rings, and reached a pitch over the weekend when Fox was seen out with Machine Gun Kelly. But it wasn't until yesterday that the split was addressed by either of them, with Green taking to his podcast, ...With Austin Green, to officially confirm their separation.

“It sucks when life changes and something that you’re used to — that you’ve been doing for 15 years — you try and not get rid of but you change,” said Green on the podcast, becoming "audibly emotional," according to Page Six. “There’s the unknown aspect…there’s that pit in my stomach," he continued. "I really don’t want Megan and I to be at odds…she’s been my best friend for 15 years and I don’t want to lose that.”

Unfortunately, some good things just aren't built to last, and the separated couple have reportedly “really been trying to sort of be apart” since the end of last year.

Green's comments come on the heels of several headlines about a possible fledgling relationship between Fox and Machine Gun Kelly. Over the weekend, several paparazzi photos surfaced showing Megan Fox hanging out with the rapper-cum-actor last Friday. Around the same time, Green posted a picture of a butterfly on his Instagram account, alongside a cryptic caption that read, "Eventually butterflies get bored sitting on a flower for too long. They start feeling smothered. It’s a great big world and they want to experience it." Many people were quick to connect the dots between Green's post and Fox's dalliances with a new man, but Green, who admits to having had conversations about Kelly with Fox, insists that there is no bad blood between the trio. “They’re just friends at this point," the Beverly Hills 90210 actor mentioned. "I don’t want people to think her or he are villains or that I was a victim in any way.”

In fact, Green still appears to be on good terms with his soon-to-be ex-wife. “I will always love her and I know she will always love me," he said. "I know as far as a family [goes], what we have built is really cool and really special.” What they have "built" are three children — 7-year-old Noah, 6-year-old Bodhi, and 3-year-old Journey — and, according to Green, the pair will try to maintain a semblance of normalcy for their sake. Though they are separating, Green assures that they will “still do family vacations and holidays as a family and really make that a focus for the kids.”

Romantic love may not last, but familial love is forever. I guess that's a bright spot.